This Is How Newspapers Reacted To Maharashtra Morning Coup

Newspapers on Saturday morning had already become stale by the time the dailies arrived at people's doorsteps as the political developments in Maharashtra took an overnight turn.

Frontpage newspaper headlines across the country on Sunday carried matter-of-fact tones as well as those of disbelief and sarcasm, a day after morning newspapers were caught on the wrong foot following an overnight change in the political developments in Maharashtra.

Newspapers on Saturday morning had carried headlines declaring Shiv Sena leader Uddhav Thackeray to be the next Maharashtra chief minister.

However, the political scenario in the state had already changed by the time the dailies arrived at people's doorsteps, with BJP's Devendra Fadnavis making a sudden come back as the CM.

Given the previous day's political shocker, Sunday's front-page headlines across the country played with words to describe the surprise element of the situation. 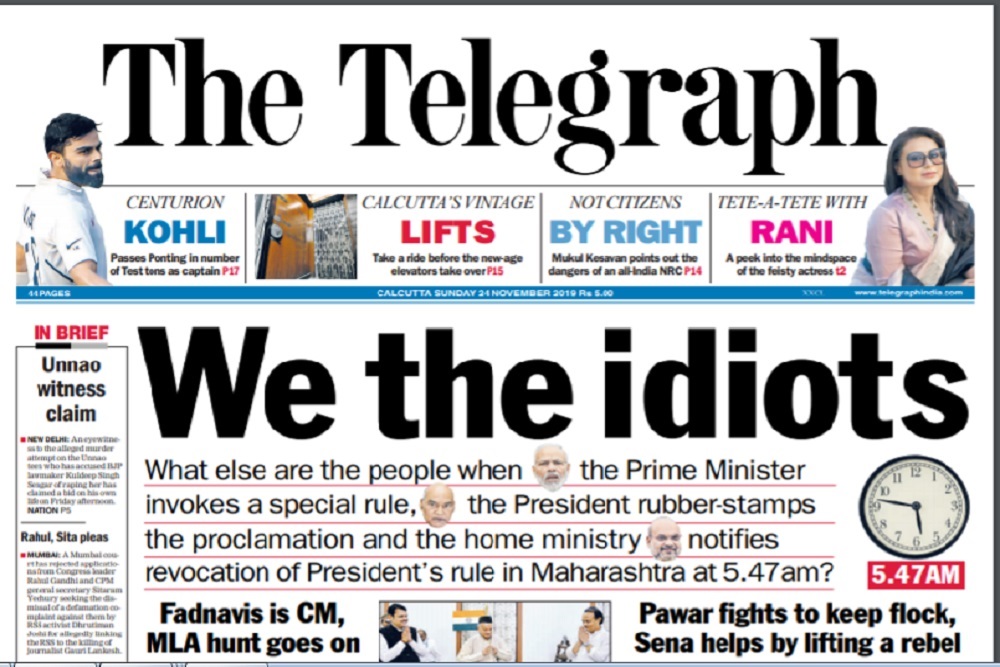 While, the headline of The Hindu used ample words to point out the coup in the NCP: "Fadnavis sworn in as CM after Ajit Pawar ditches uncle", the Indian Express wrote across the page: "While you were sleeping" emphasising the odd nature of the early morning developments. 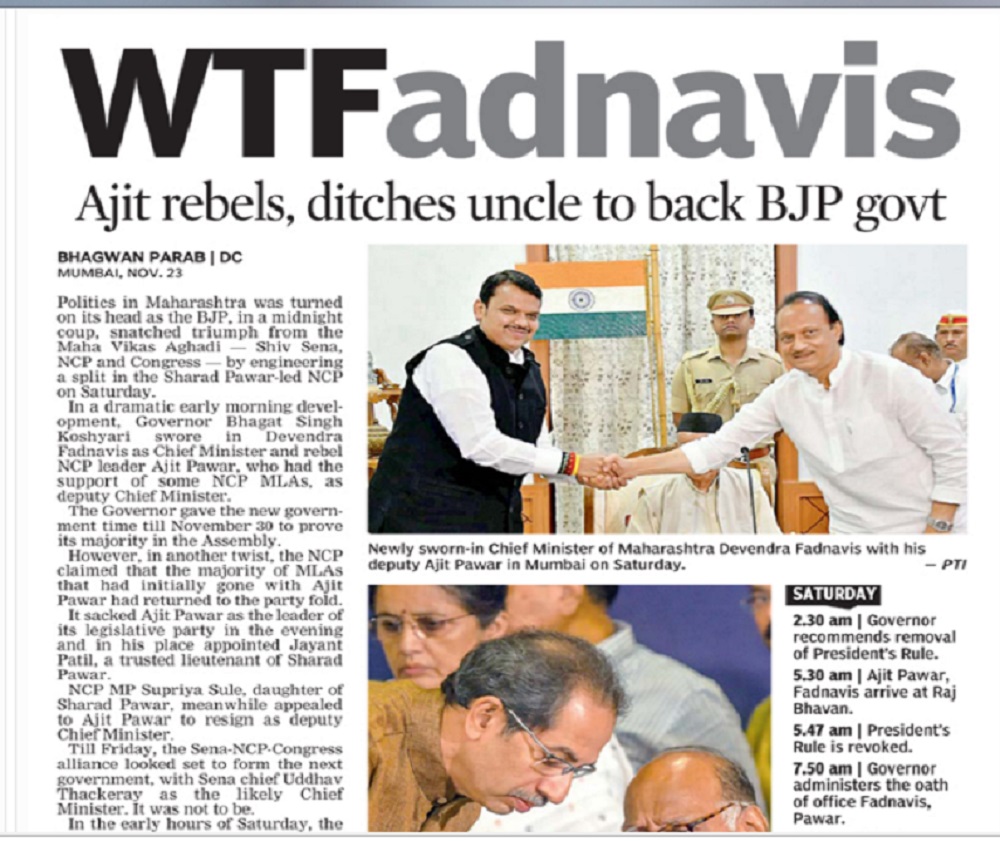 Hindustan Times' story on the political twist ran with "Maharashtra drama continues: Fadnavis is CM, Ajit his deputy". English daily Times of India drew a comparison with the ongoing India-Bangladesh day-night test match in Kolkata. "The real Day-Night test is in Mumbai," the headline read.

A few newspapers including The Sunday Guardian, Mail Today, and The Pioneer mentioned the dispute in the Sharad Pawar-led NCP. 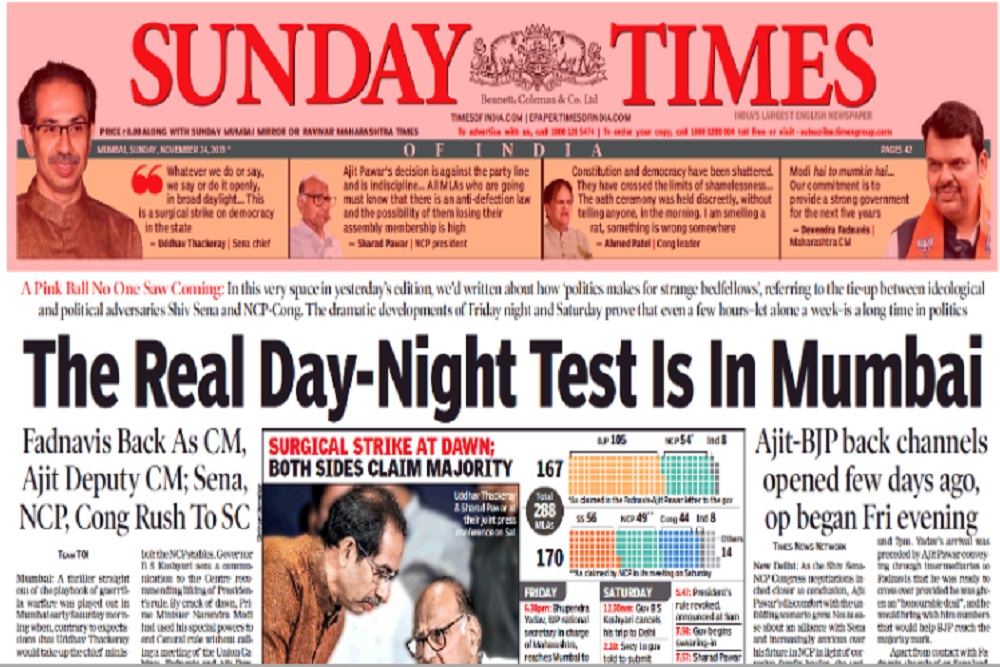 While The Sunday Guardian read: "Pawar outplays Pawar in Maha stunt", the Mail Today ran "Maha coup - the inside story" as the headline, and the New Sunday Express carried the story with "Confusion after coup".

Vernacular dailies too grabbed the chance to run witty headlines.

Drewing comparison with a game of chess due to the surprising move by the BJP, Rajasthan Patrika's headline read: "Shah...maat...phir shanshay (Check...mate...then doubt)". 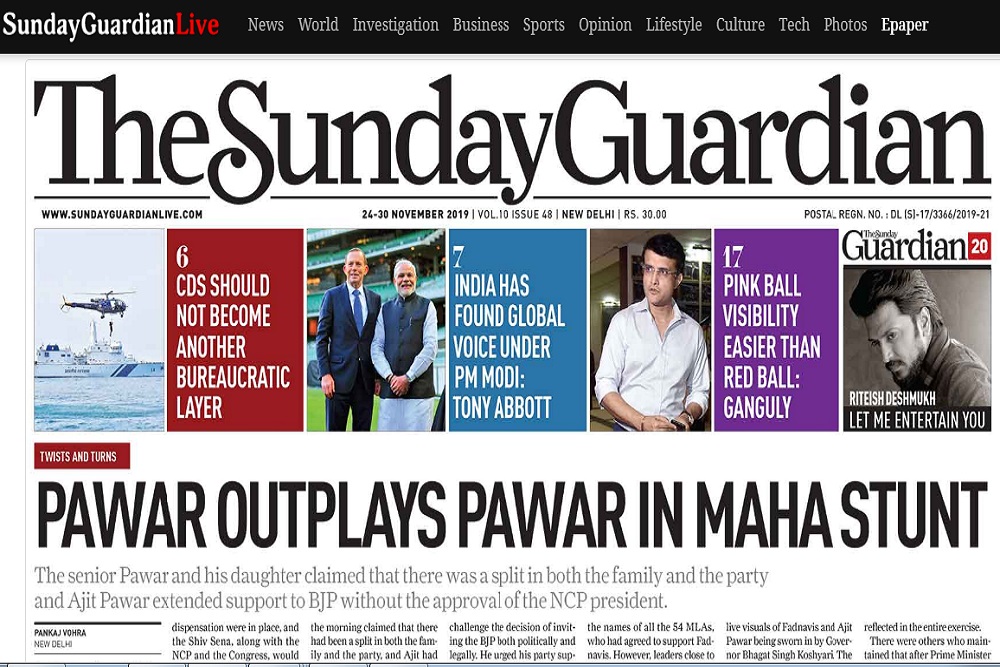 Hindi newspaper Sanmarg also compared the news to a game of chess while making a pun on the word 'Shah'.

Bengali daily Anandbazar Patrika compared the surprise political move to India's retaliation across the Line of Control in 2016. The paper ran the story with "surgical strike" as its headline.

A number of newspapers focussed on the late-night nature of the political turnaround.

Tamil dailies Dinathanthi and Dinakaran also focussed on the midnight angle in their headlines.

Till Friday, political pundits, as well as media houses, remained focused on the then-ongoing talks between Congress, NCP and Shiv Sena to form the government in the western state.

Some front page headlines also carried initial disbelief after Fadnavis was sworn-in as the CM.

"Maharashtra me pal me tola, pal me masha," it read.

As most newspapers remained in the ambit of being witty or even sarcastic, some went ahead and printed front pages with rather hard-hitting and unusual headlines.