Due to the ongoing pandemic, the Independence Day celebrations were curtailed for the second consecutive year, with attendees wearing masks and maintaining social distance. 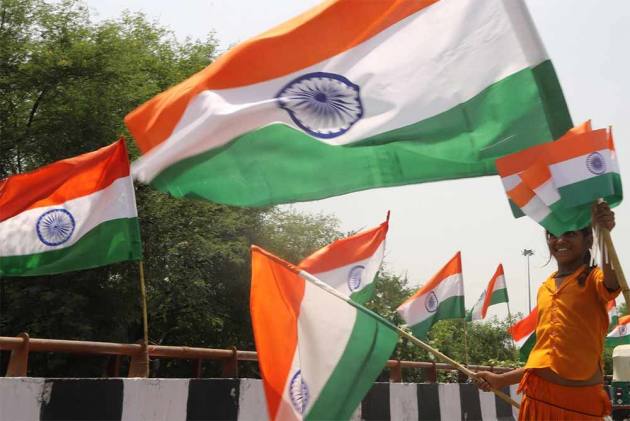 For the first time in history of India’s Independence, 75th I-Day was different in many ways, including showering of flower petals by two IAF choppers, a separate venue for ‘corona warriors’, Olympians as special guests and socially-distanced audience.

Due to the ongoing pandemic, the Independence Day celebrations were curtailed for the second consecutive year, with attendees wearing masks and maintaining social distance.

The school children who would usually attend the event dressed in the colours of the national flag, were not present this time too.

Instead, 500 NCC cadets were invited to the event.

Sporting a saffron headgear with red patterns, the Prime Minister on Sunday delivered his eighth consecutive speech from the ramparts of the Red Fort.

The annual event, which otherwise sees bustling crowds of people across age groups, was scaled down for the second year in keeping with the prescribed safety protocols to contain the spread of the novel coronavirus that wreaked havoc across the world.

A small medical kit containing a mask, a small bottle of hand sanitiser and a pair of gloves was kept on all chairs. A hand towel was kept on the backrest of the chairs along with the programme pamphlet.

Senior-most cabinet ministers were seated on the upper dais.

Guests, security staff, VIPs, all were sporting masks as prescribed under the safety norms.

As the weather turned sultry, hand-fans procured by the Defence Ministry from the Tribal Affairs Ministry's agency TRIFED, as part of the government's efforts to popularise local products, gave much-needed relief to the guests.

At the main entrance, hands-free sanitiser dispensers were kept near security gates.

Inside, chairs were placed in a careful matrix across all enclosures. Social distancing norms were also in place on the rampart where the VVIPs were seated.

Security remained tight at the venue and elsewhere in the city.

At the Red Fort, a multi-layered security blanket had been put in place. A security ring of NSG snipers, elite SWAT commandos and kite catchers were also placed around the venue and over 350 cameras were installed.

According to the police, anti-drone systems were also installed at the Red Fort in view of the recent terror attack at the IAF station in Jammu airport where Pakistan-based terrorists used drones for the first time to strike the vital installation.

Around 5,000 security personnel were deployed while adhering to social distancing norms, they said.

The Delhi Police had erected a huge wall of shipping containers decorated with graffiti at the main gate of the Red Fort for security reasons.

The containers were placed in such a way that no one was able to see inside the premises of the fort when the prime minister addressed the nation.

The move came after many farmer protesting against farm bills reached the Red Fort driving tractors and entered the monument on January 26 and hoisted a religious flag.

For the first time ever, as soon as the tricolour was hoisted by the PM, flower petals were showered at the venue by two Mi-17 1V helicopters of the IAF in Amrut formation.

The Defence Ministry said 32 athletes who won medals at the Olympics, and two officials of the Sports Authority of India (SAI), were invited to participate in the celebrations.

Javelin thrower Neeraj Chopra, who created history at the recently-concluded Tokyo Olympics by winning the country’s first track-and-field gold, was one of the 32.

In Tokyo, India recorded its best-ever medal haul in the Olympics by bagging a total of seven medals -- one gold, two silver and four bronze, which included the bronze by the men’s Hockey team.

A separate block was created on the south side of the Red Fort's ramparts for “Corona warriors” such as health workers to honour them for playing a vital role in fighting the pandemic.

India is commemorating its 75th Independence Day as 'Azadi ka Amrit Mahotsav' under which a series of events have been organised across the country. (With PTI inputs)