Polls in Anantnag constituency comprising South Kashmir’s four districts -- Anantnag, Kulgam, Shopian and Pulwama -- were held in three phases. Polling in the third and last phase today in Shopian and Pulwama, 2.64 percent polling was recorded, which is lowest ever in the electoral history of Jammu and Kashmir. 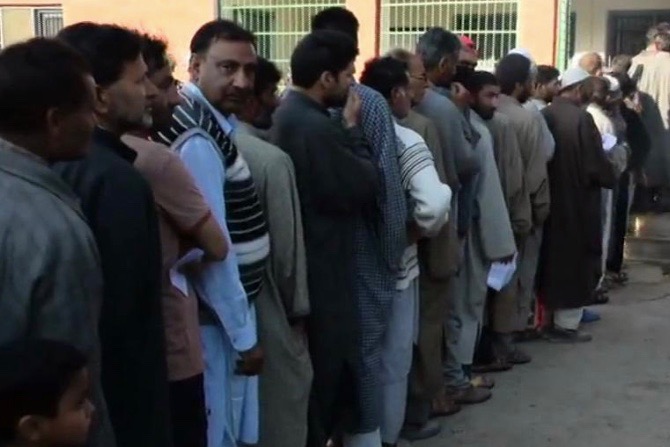 Outside Balpura Army Goodwill School, located at Rambiara stream, in Shopian, around 60 km south of Srinagar, a large number of security forces personnel were on guard today. The CRPF personnel were manning the gate, the Army was also at the gate and in the school premises, Jammu and Kashmir Police and paramilitary forces were patrolling at different points.  In the school, which was serving as a polling station for three neighbouring villages having total electorate of 3,995, not a single voter was present.

A CRPF jawan said since morning he only saw media persons visiting the school. “Don’t know why villagers are not coming to cast votes,” he said. “I was posted in Kashmir four months ago and this total boycott of the polling looks strange,” he said.

At the polling booth, only three votes had been cast till 11 a.m. In other polling stations of Shopian district the situation was the same. In some polling booths, not a single voter had turned up.

The only surprise was Kareva Manloo area of Shopian as long queues were seen outside polling stations since morning. “This election is not for any development or any party,” said a group of women at polling station Manloo. “This election is to protect Article 370 and the Article 35A,” they said. A retired teacher, Gyas-ud-Din, 75, said that he voted for a candidate who would speak on behalf of the people in Parliament.

At several places in Shopian-Pulwama road masked youths were throwing stones at the security forces. The forces in retaliation were firing tear smoke shells.

At a polling station at Arihal, of 4,700 voters, only four persons had cast their vote by 12.p.m.  At the village Gandibagh in Pulwama locals said there is no polling booth in the area. Jaish militant Adil Ahmad Dar who carried out a suicide attack on the security forces vehicle on February 14 this year killing 40 CRPF belonged to the same village. The villagers showed no interest in voting. “We don’t even know where the polling booth is,” said people. Locals here were mostly busy with their agricultural work.

In the two districts, there were 695 polling booths and most of the booths were clubbed together for security reasons. On Sunday, poll staff for 24 polling stations in Zainapora area of Shopian were airlifted from police lines Shopian to ensure their safety from stone-throwing youths. In Shopian the total electorate is 1,71,216 while in Pulwama, it is 3,51,314.

The candidates in the fray from the constituency are: former Chief Minister and PDP leader Mehbooba Mufti, a former judge of the high court and National Conference candidate Hasnain Masoodi, Congress state president Ghulam Ahmad Mir, BJP leader Sofi Yousuf, and 14 others.

The constituency is the only one in India in which elections were held in three phases. Ahead of the polls, the police arrested a large number of youths from both the districts. But pre-poll arrests didn’t prevent stone throwing in Shopian and Pulwama districts of the Valley.