The Madras High Court had ordered closure of liquor outlets noting that there were huge crowds and no social distancing was being maintained by tipplers. 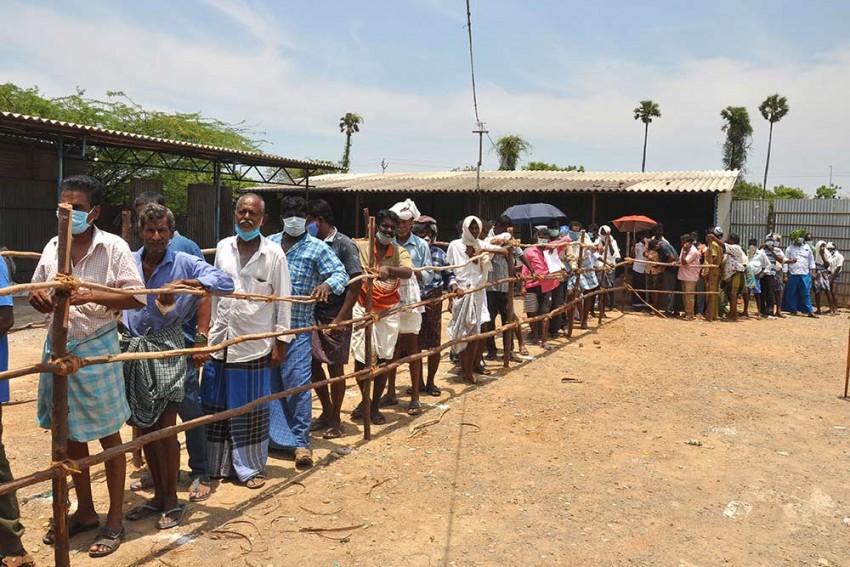 People line up to buy alcohol from a liquor shop, during the third phase of COVID-19 lockdown, on the outskirts of Chennai.
PTI photo
PTI 2020-05-09T15:15:37+05:30 Tamil Nadu Moves SC Against HC Order Barring Counter Sale Of Alcohol 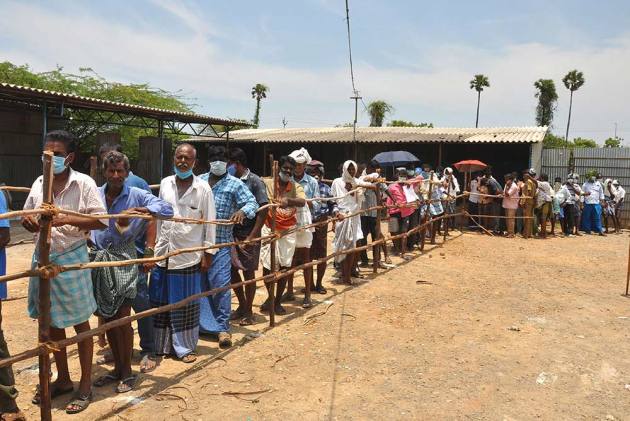 The Tamil Nadu government on Saturday moved the Supreme Court challenging a Madras High Court order for closure of state-run liquor outlets on the ground that there was total violation of guidelines meant to contain the COVID-19 pandemic.

The Madras High Court had on Friday ordered closure of liquor outlets noting that there were huge crowds and no social distancing was being maintained by tipplers. It, however, allowed doorstep delivery of booze through online mode.

The top court too had taken note of crowding at liquor shops and asked states on Friday to consider non-direct contact or online sales and home delivery of liquor during the lockdown period to prevent the spread of the novel coronavirus.

The appeal against the high court order has been filed by the Tamil Nadu State Marketing Corporation (TASMAC), a government firm which sells alcoholic beverages in the state, seeking permission to sell liquor through vends also.

The high court order restraining counter-sale of liquor was passed on a miscellaneous petition filed by advocate G Rajesh, besides a plaint from the Kamal Haasan-led Makkal Needhi Maiam (MNM).

The HC had said there was total violation of its interim order issued on Wednesday, when it declined to stay a government order allowing resumption of sale of liquor through outlets.

After a dry spell of 43 days due to the COVID-19 lockdown since late March, liquor sales resumed at TASMAC outlets in Tamil Nadu, except state capital Chennai, on Thursday.

Heavy rush was witnessed at most places with people standing in serpentine queues even as the move to allow sale of liquor came in for flak from opposition parties and others, who raised apprehensions that it would lead to further spread of the novel coronavirus, which as of Friday has affected over 6,000 people in the state.

On Wednesday, the bench had directed the government to ensure strict implementation of all appropriate rules, as notified by the state, including maintenance of social distancing at liquor shops while allowing the resumption.

When the matter came up on Friday, petitioner Rajesh submitted that there was a total violation of the guidelines framed as per a May 5 government order and also the norms stipulated by TASMAC and the court.

Tamil Nadu had decided to open retail liquor outlets, citing relaxation of lockdown norms by the central government. Tipplers in border districts of the state were also making a beeline to neighbouring Andhra Pradesh and Karnataka where liquor sales resumed on May 4.

Resuming Flight Operations Within A Week Will Be Fraught With Challenges. Here Is Why