Home  »  Website  »  National  »  Tales Of Police Excesses Raise Questions About Their Propriety. Is There A Deeper Rot In Agency?

For a force trained to follow orders, even those given with scant regard to the letter of the Constitution, it is perhaps not entirely wrong to blame the political masters for the atrocities the police frequently unleash on those who dare to question government policy. 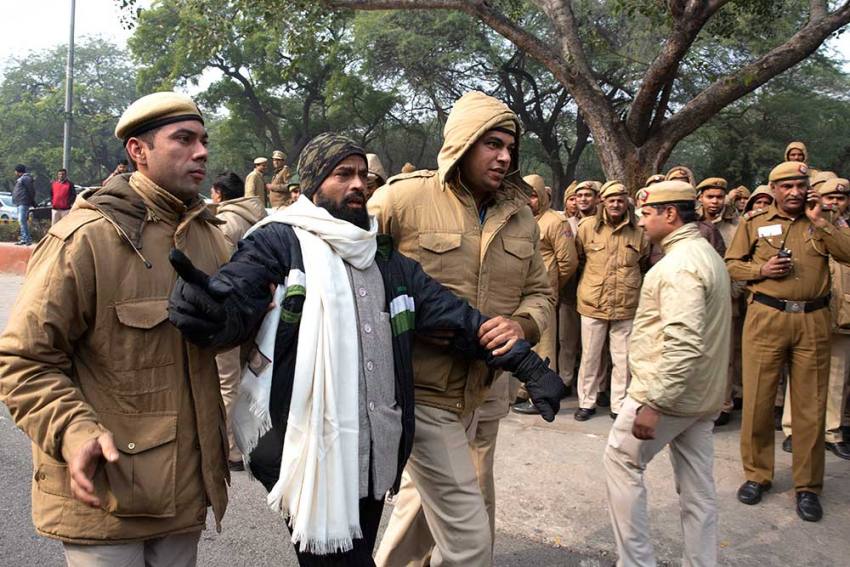 A policeman detains a protester outside Uttar Pradesh Bhawan as he participates in a protest against violence by police that have arisen during demonstrations against the new citizenship law in the state, in New Delhi.
Puneet Nicholas Yadav January 16, 2020 00:00 IST Tales Of Police Excesses Raise Questions About Their Propriety. Is There A Deeper Rot In Agency? 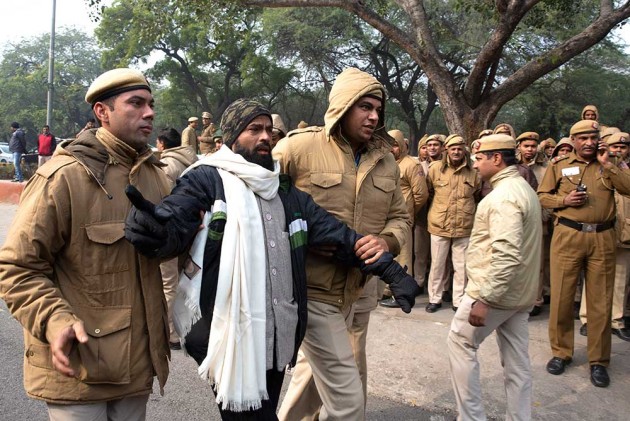 “There is no part of our system of government of which such universal and bitter complaint is made, and none in which, for the relief of the people and the reputation of government, is reform so urgently called for... The improvement of the police must, in the interests of the people and of good government, take precedence of every other project.” There’s a reason why these words of John Woodburn, the British governor of Bengal between 1898 and 1902, and their reiteration by Andrew Fraser, president of the first Police Commission set up by the British in India in 1902, still haunt Prakash Singh, former director general of police of Uttar Pradesh, Assam and the Border Security Force.

“What they said over a century ago was about a police force helmed by the British and governed under an act (Police Act, 1861) that was drafted with the intention of using brute force to crush any resistance by Indians in the aftermath of the 1857 sepoy mutiny. It is a disturbing irony that these comments hold true in India even today, though the people governing us are now our own, as are those who head the police force,” Singh tells Outlook.

The police brutality against students of the Aligarh Muslim University (AMU) and the Jamia Millia Islamia who were peacefully protesting against the Citizenship (Amendment) Act fits into the pattern Singh speaks of. As does the abject abdication of duty by the Delhi Police when they failed to stop masked assailants from storming the JNU campus and attacking students.

The most obvious criticism of the police’s acts of omission and commission in AMU, Jamia or JNU is their willingness to do the government of the day’s bidding. For a force trained to follow orders, even those given with scant regard to the letter of the Constitution, it is perhaps not entirely wrong to blame the political masters for the atrocities the police frequently unleash on those who dare to question government policy. Yet, can the ‘upar se order aaya tha’ excuse isolate the police from blame when in the garb of maintaining law and order they thrust on the people a reign of terror? Is there a deeper rot in our policing mechanism, which often gets ignored because of frequently calamitous political interference?

Nandini Sundar, professor of sociology at Delhi School of Economics, believes there are systemic flaws which make the police act as oppressors. “We have a system that incentivises impunity and brutality,” she says, explaining that security personnel get rewarded by governments with medals and promotions for excesses like extrajudicial killings or human rights violations in Maoist-affected areas that are carried out in the name of counter-insurgency.

Even a cursory glance through the Status of Policing in India reports (SPIR), prepared by Common Cause and the Centre for the Study of Developing Societies, reveals the gross inadequacies in our police force. The SPIR 2019, prepared after a survey of 20,000 police personnel and their family members, presents a ghastly picture of rampant institutional bias against religious minorities, prejudice against members of the scheduled caste and scheduled tribe, and a gross lack of training on human rights, caste sensitisation and crowd control. Sample just a few findings of the SPIR 2019: 50 per cent of the personnel surveyed felt that Muslims are “very much” or “somewhat” naturally prone to committing crimes; one in five felt that cases registered under the SC/ST Act “are false and motivated”; 70 per cent felt migrants are “very much” or “somewhat” naturally prone to committing crimes and 35 per cent justified mob violence against anyone suspected in a case of cow slaughter. Further, the report says “one out of five police personnel feel that killing dangerous criminals is better than a legal trial” while “three out of four personnel feel it is justified for the police to be violent towards criminals”.

The cases of police brutality in AMU, Jamia or several districts across Uttar Pradesh since the anti-CAA protests began, says Sundar, must be viewed as a “continuing trend that manifests time and again” when the police deal with dissent against the State. “We see this all the time in Maoist-affected areas of Chhattisgarh or in Jharkhand’s Pathalgadi movement… why just the police, even the district administration there isn’t concerned about the Constitution and harassment of or violence against citizens is a regular affair,” Sundar says.

According to Delhi-based criminal psychologist and lawyer Anuja Kapur, the problem with the police, particularly in the lower ranks of the force, “isn’t just a lack of understanding of the law but a conditioning that makes them look at every common citizen as a suspect even if the person before them is actually a victim of crime.” Kapur cites the oft-quoted complaint by rape survivors about being questioned by the police about their character or the kind of clothes they wear. “This insensitivity, the habit of victim shaming runs deep in the police force,” says Kapur, asserting that “not just politically sensitive cases but even crimes against women, religious minorities or incidents of caste violence bring out the worst in our police.”

A Pune-based sociologist, who doesn’t want to be named, says: “A few years ago, I used to interact with the police regularly for purposes of research and what struck me was the sense of power and licence to bully that most policemen believed there job entitled them to.” He adds that “the biggest factor that dehumanises a cop is this misplaced sense of power; they really believe that they are the law”. Sundar agrees and says provisions in the Code of Criminal Procedure or draconian laws like the AF(SP)A or the NIA act, which give sweeping powers to security personnel for acting against suspects and immunity from punishment for actions they claim were taken with bona fide intent aid atrocities.

At public events and seminars where the need for police reforms is discussed with palpable conviction, one often hears high-ranking policemen pontificate on an ideal police force. In June last year, while unveiling a play area for children at Kalkaji police station, Delhi Police commissioner Amulya Patnaik said: “…children should have a feeling that police stations are a place where the atmosphere is positive and comforting. It is like any other place where one could go to get one’s grievances addressed. The policemen sitting there are like friends who are there to help everyone at any point of time.” It is difficult to reconcile this statement with his stewardship of Delhi Police when it came to the anti-CAA protests in the national capital.

For a common citizen, the first point of contact with the police is either the beat constable or the local thana. The thana-level personnel are not even trained to speak politely to people, says Kapur. “They treat you with contempt because they feel you are burdening them with more work.” This antagonistic behaviour against a complainant, feels Kapur, contributes to the poor quality of FIRs that are registered at police stations, which then translate into shoddy investigations that frequently get slammed by courts.

Even assuming that an ordinary policeman must bow before the diktats of his superiors or the government in matters that are politically sensitive to secure his career in the force, what justifies impudence while dealing with common citizens in matters of simple crimes like theft or a missing vehicle—or trashing students protesting against an evidently flawed law? Sundar has a probing question: “Do these cops not have children who go to schools and colleges; how would a cop react if his child was beaten up by another cop?”

From CAA To Indian Economy, Nazma Aapi Addresses Every Issue One At A Time