'Shoot Us Or Send Us Home': Migrants Struggle To Return As Punjab, Haryana Shift Blame

An elderly labourer said he wants to go to his home in UP, but many migrants like him who had set out on foot were facing police on both sides. 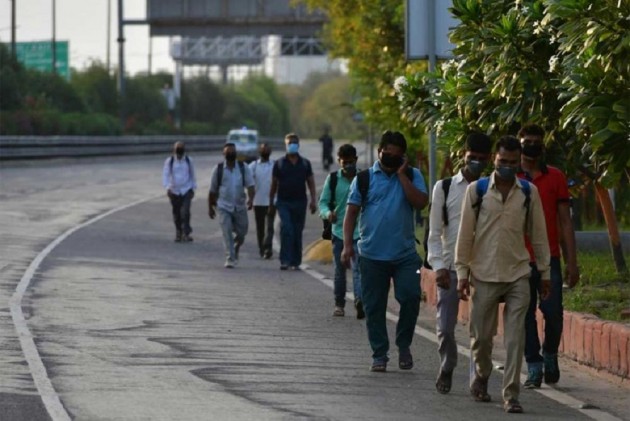 A large group of migrant labourers on Friday tried to enter Haryana from Punjab, but the police stopped them as they did not have authorisation.

A number of migrants had gathered on Haryana-Punjab border near Shambhu in Punjab, close to Ambala in Haryana.

Many among them who hailed from different places in U.P. and Bihar, said they have walked long distances and they wanted to go home.

"We have no work left, we have nothing to do now. We just want to go home. Many among us have walked miles without food. Either shoot us or send us home," said a middle-aged migrant labourer, carrying his belongings on his head.

Another labourer who was walking with his wife said he belongs to Siddharth Nagar in Uttar Pradesh.

"I used to work in Ludhiana, I stayed on rent. The house owner started to pressure me to pay rent. I have no savings left. We want government to help us, we have given our votes, we are also citizens of this country,” he said.

He said that on Haryana side of the border they were told to go back to Punjab side.

Another migrant said not all labourers were able to register themselves on portals or websites and the government must help them in this situation.

An elderly labourer said he wants to go to his home in UP, but many migrants like him who had set out on foot were facing police on both sides.

"The police on that side (Haryana) is not allowing us to enter. But we do not want to go back now. The government must send us by train, bus, truck, ambulance, any vehicle," he pleaded.

The Haryana Police said some of the migrants told them that they wanted to board the special Shramik Trains running from Ambala Cantt to go to their native places in Bihar and UP.

BJP MLA from Ambala City, Aseem Goel, who also reached the Shambhu border, alleged that the Punjab police was encouraging the migrants to enter Haryana, a charge denied by them.

Senior officers of Ambala police also rushed to the site and stopped the migrants from crossing the border.

In the meantime, around 200 migrants reached the periphery of Ambala through the streets of Punjab villages adjoining the Haryana border.

The police stopped them near Jandli bridge at Ambala City but they were adamant to not go back to Punjab after which the police resorted to mild cane charge and forced them to go back.

Later the migrants including women and children were sent back to Punjab.