The Coronavirus cases in Delhi have registered a steep rise over the last few days, taking the tally to over 73,000. 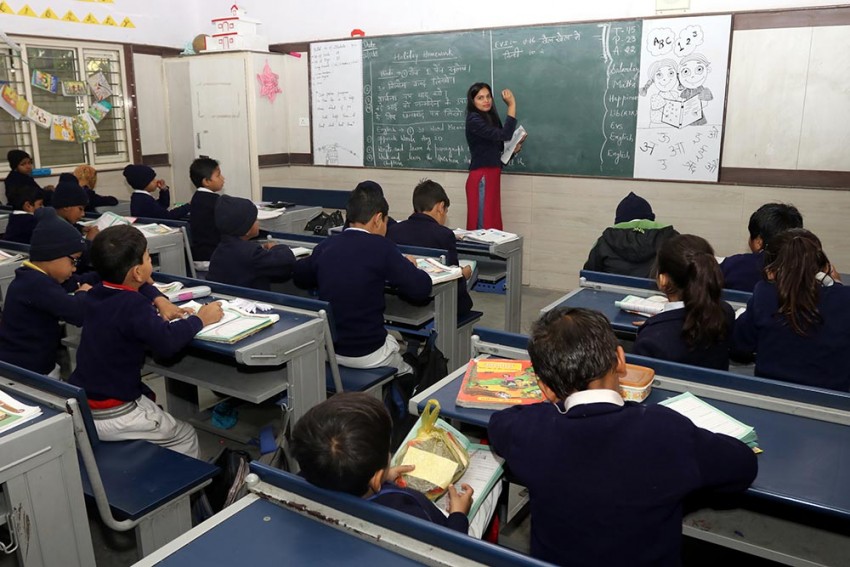 A class in progress at a government school in Delhi
Photograph by Suresh K. Pandey
PTI June 26, 2020 00:00 IST Schools In Delhi To Remain Closed Till July 31, Says Govt As Covid Cases Rise

Schools in Delhi will remain closed till July 31 in view of the COVID-19 situation, while online classes and activities shall continue, Deputy Chief Minister Manish Sisodia announced on Friday.

Sisodia, who is also the city's Education Minister, made the announcement after a meeting with officials of the Directorate of Education (DoE) on how to reopen schools.

Among issues deliberated upon during the meeting were a 30 to 50 per cent reduction in syllabus to ease students’ stress, and class-specific plans for online activities as well.

Schools in Delhi were closed mid-March due to coronavirus outbreak. When the government announced a nationwide lockdown on March 24, which came into effect the next day, they continued to remain closed.

There have been no guidelines yet from the Centre government on when schools can reopen.

"Reopening schools is not merely a technical work, rather, it is a creative work that would give schools a new and bigger role. Schools will continue to be closed in Delhi till July 31. Let’s design a plan to reopen schools in a way that would prepare our students to adjust to the new circumstances and not fear them. It would help our students to learn to live with coronavirus," Sisodia said.

According to an official statement, during the meeting, suggestions were given to resume activities to give learning opportunities and emotional support to children using remote methods and support of parents till the schools reopen

"Experiences related to continuing education through various programmes during the lockdown situation induced by COVID 19, were also discussed. Various points on introducing specific plans for every class were also discussed in the meeting. Various suggestions on changing the approach towards reopening of schools. Continuing online classes and activities with the help of parents were agreed upon. Pointers to cut down the syllabus upto 50 per cent were also discussed," the statement said.

One of the suggestions in the meeting was that primary classes should be held once or twice in a week with a strength of 12-15 students in a class, it said.

"Another point was made that classes can be conducted on alternate days for students of classes 3 to 5. Continuing with the online classes wherever possible, carrying proper sanitization work in classrooms, distributing masks to students, thermal screening of every student at the school entrance gate, and reduction of the syllabus were some of the major suggestions given at the meeting," it added.

Along the same lines, conducting classes once or twice a week for students of classes 6 to 8 was suggested.

It was also proposed at the meeting to conduct classes for three days in a week, the statement said, adding there was also a suggestion to ban students' mass activity and crowd.

"For classes 9 and 10, it was suggested that classes should be taken in very small groups once or twice a week. Some members were of the view that Class 10 students should have classes every day. But it was strongly agreed that online classes should not be withdrawn and online library facilities should also continue like before,” the statement said.

A district-wise report based on suggestions from 829 teachers from government  and private schools, 61 Head of Schools, 920 students, and 829 parents received online and suggestions from 23,262 teachers and 98,423 parents at the school level formed the basis of the discussions at the meeting.

Universities and schools across the country have been closed since March 16 when the central government announced a countrywide classroom shutdown as one of the measures to contain the COVID-19 outbreak.