Rumblings In Congress: Those Commenting On Twitter Should Stand Unitedly Behind Party Leadership, Says Surjewala

Congress's chief spokesperson Randeep Surjewala has urged both the young and the old guard in the party to stop commenting in public about each other and focus on unitedly 'fighting against the crisis that has gripped the country'. 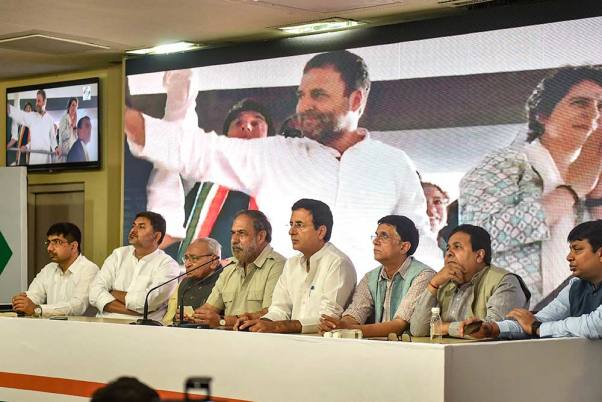 After sparring on Twitter over the party's legacy during the UPA regime, the Congress on Sunday advised those commenting on the microblogging website to unitedly stand behind its leadership in fighting the BJP government's "weak response" to the COVID-19 pandemic and its "oppressive" policies.

Congress's chief spokesperson Randeep Surjewala urged both the young and the old guard in the party to stop commenting in public about each other and focus on unitedly fighting against the crisis that has gripped the country.

"I would like to suggest to all those colleagues who are making comments on Twitter to raise issues at the party platform under the leadership of Sonia Gandhi and Rahul Gandhi, as there is democracy in the Congress and leaders are not forcibly retired," he said when asked about the public comments made by some party leaders.

Surjewala, however, did not reply to a question on whether the party had taken cognizance of such comments made on Twitter.

He said the country is passing through a difficult time with around 18 lakh people infected with the coronavirus, adding that experts are saying the number of COVID-19 cases is increasing in India but the Narendra Modi government is "silent" about it.

"The prime minister and health minister have left the people to fend for themselves. People are losing their livelihoods, there is an economic crisis and factories are being shut. Indian territory is being captured by China and those claiming to show red eyes to the neighbouring country are scared to even name China," the Congress leader said.

He said in such a situation, the country is looking towards the Congress, its leadership and workers.

"In such times, the responsibility of senior Congress leaders is more, as they have the experience of being both in the party and the government. It is their biggest responsibility to stand by the Congress leadership and work together with Sonia Gandhi, Rahul Gandhi and Manmohan Singh to fight the pandemic, the economic crisis and China, and show the mirror of truth to the government," Surjewala said.

He added that it is a key responsibility of senior Congress leaders to guide their young colleagues.

"I would urge all old, middle-aged and young Congress leaders to unitedly stand against the oppressive policies of the Modi government in such trying times, where people are losing their jobs due to the economic crisis and the government's weak response in fighting the coronavirus, formulating policies, taking the country out of this crisis and quelling the Chinese. This united fight is true patriotism," Surjewala said.

His comments came amid an ongoing tussle between the young and old guard in the Congress, with veteran leaders urging their colleagues not to discredit their own legacy.

Advising restraint in airing grievances in public, several former Union ministers have cautioned their party colleagues, saying such tendencies divide the Congress at a time when unity is needed. They have also said that one needs to learn from past defeats and revive the party rather than play into the hands of its "ideological enemies".

Surjewala also dismissed as "motivated" and "false" some reports in the media that said AICC Gujarat in-charge Rajeev Satav had made disparaging remarks about former ministers P Chidambaram and Kapil Sibal at a recent meeting of the party's Rajya Sabha MPs.

Satav reportedly asked for a review of the performance of the ministers in the UPA era and whether that had led to the Congress's electoral loss in 2014.

Satav took to Twitter on Saturday to claim that the media had twisted his remarks, while noting that bringing Singh into the debate was "malicious and reprehensible".