PDT Achary, Secretary-General of the 14th and 15th Lok Sabha, spoke to Outlook about whether a committee should inquire about the violent incidents during the just concluded Monsoon session of the Parliament. 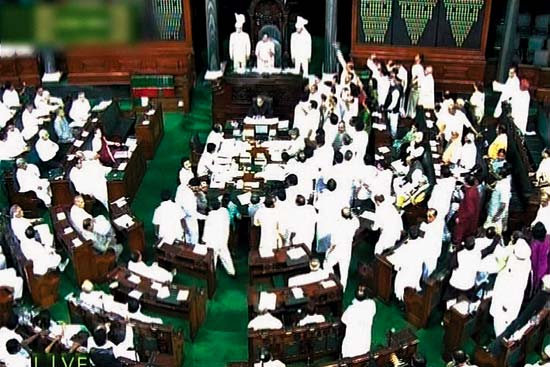 PDT Achary, Secretary-General of the 14th and 15th Lok Sabha, spoke to Outlook about whether a committee should inquire about the violent incidents during the just concluded Monsoon session of the Parliament, the rules of the House, and more.

There are reports that Rajya Sabha Chairman M Venkaiah Naidu is mulling action against Parliamentarians who created ruckus in the House during the monsoon session. What are the possible actions that can be taken against members according to rules?

The incident has taken place inside the house. It is within the cognizance of the House and the chairman should have taken action that day itself.

The rules say that a member can be suspended if the chair felt that he/she was indulging in misconduct, flouting the directions of the chair, and obstructing the proceedings. The only possible action according to rules is a suspension of the members till the session gets over.

All that the Chairperson required to do was to have quick consultation or adjourn the House for 10-15 minutes and discuss matters with the Parliamentary Affairs Minister and the Opposition. He should take the opposition into confidence. Further, he can ask the minister to move a motion to take action against the member.

In the case of a collective protest and mayhem in the House, the Speaker or the Chairman can suspend them summarily. No motion is required for this. He can announce the names of the members who have created ruckus and they will be automatically suspended. These are the two routes of suspension—one is an automatic suspension route and the other is by moving a motion.

Reports say that the Rajya Sabha Chairman is considering sending the matter to a committee to decide further course of action against the lawmakers for the unruly behaviour in the House.

This incident could have been examined by the privilege committee. But rules provide for immediate punishment, not delayed ones. Usually, members are suspended for the remaining sessions. The remainder of the session means suspension for an offense that was committed during that session.  Now that the session is over, it’s a meaningless exercise. Talking about the Ethics committee, this issue doesn’t come under the purview of the Ethics committee, which looks into the unethical and immoral conduct of members.

The government had demanded a high-level probe and harsh punishment against the Opposition MPs for the unfortunate incidents in the House.

You must have witnessed many such tumultuous scenes during long years of working with the Lok Sabha. How do you compare then and now?

I would say that situation was quite different in the past. There used to be protests which were very intense, and strong.  But the members wouldn’t come to the well or anything. The most important thing is that there were dialogues between the government and the Opposition at informal levels. In the 1970s, during Indira Gandhi’s rule, the Parliamentary Affairs Minister Kotha Raghuramaiah used to play a very important role in taking the opposition along with the government.  In fact, he used to be seen most of the time in opposition benches.

Do you think there is a total breakdown of communication between the government and opposition as both sides blame each other?

During my tenure, I have witnessed many incidents. On many occasions, suspension of members was done, and sometimes, it was not done at all. Once the House gets adjourned, the Speaker will invite all the leaders of the opposition and Parliament Affairs Minister to the chamber to sort out issues. Now, all this is happening because the government doesn’t want to concede even an inch to the opposition. It appears that the government doesn’t want any kind of opposition to what they say and what they do. If the government approaches the house with the attitude, there will be no peace in the House. It’s an unequal fight because the opposition is powerless and the government is powerful. The Constitution gives equal rights to ruling party members and the Opposition members. When the BJP was in the opposition, Arun Jaitley once stated that obstructing the House proceedings is a democratic process