DGP Gupteshwar Pandey hails from Buxar district of Bihar and had once tried his luck in politics as well. It is said that in 2009, he wanted to contest for Lok Sabha on a BJP ticket from Buxar for which he had resigned from the post of IPS officer. 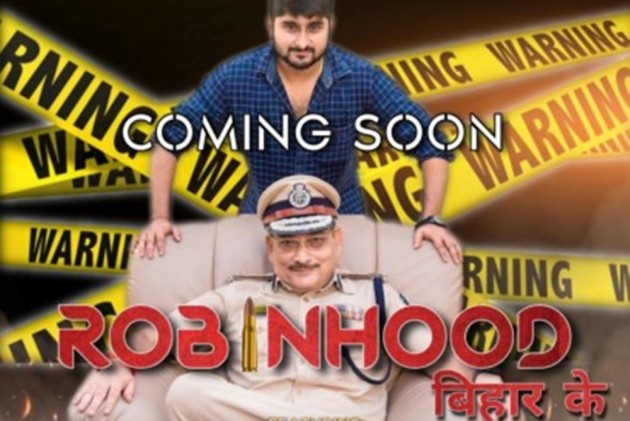 "Thana mein baithe on duty; bajawein haye Pandeyji seeti." Bihar’s much talked-about Director General of Police (DGP) Gupteshwar Pandey may not exactly whistle on duty but he is all set to make his debut in a music video. Gupteshwar Pandey will feature as the “Robinhood of Bihar” in a video song rendered by Deepak Thakur.

Deepak Thakur, who hails from Muzaffarpur district, shot to fame when he made it to the finals of Bigg Boss Season 12, hosted by actor Salman Khan. He is now releasing a new music video titled "Robinhood Bihar Ke" featuring Pandey, the police chief of the state. The song has been composed and sung by Thakur. The song’s teaser on YouTube features Gupteshwar Pandey along with Thakur.

Thakur has also shared a poster of the song on his Twitter handle. In the poster, Gupteshwar Pandey is seen sitting on a couch, as Thakur stands right behind him.

Thakur tells Outlook, that the song will be released on September 20, and can be viewed on his YouTube channel “DT Production” which has more than two lakh subscribers.

Prior to his appointment as Bihar DGP, he was the Deputy Inspector General of Munger and Muzaffarpur Zone. In the past, he has also served as the Superintendent of Police (SP) in several Naxalite affected districts. He is also the poster boy of Chief Minister Nitish Kumar’s liquor-ban campaign.

“I have known Gupteshwar Pandey for the last 18 years. He is the only one who has helped me complete my schooling. I know him personally. We have an old relationship. It is a matter of pride to be associated with such a person,” says Thakur.

According to Thakur, Pandey helps people in need. “Even after holding the top position, he is a humble man. Through this song, I am only highlighting whatever he has done. He is truly the Robinhood of Bihar. Sometimes people have seen him in disguise as a beggar, or a rickshaw-puller while investing cases," says Thakur.

DGP Gupteshwar Pandey hails from Buxar district of Bihar and had once tried his luck in politics as well. It is said that in 2009, he wanted to contest for Lok Sabha on a BJP ticket from Buxar for which he had resigned from the post of IPS officer. However, BJP decided to field its veteran leader Lamuni Choubey instead.

His term as DGP is going to end in February 2021. There are already speculations that he may turn to politics after his retirement. Thakur said that if he joins politics and serves the state, it will be good for the state. “Politics needs a person like him. We have very few leaders from the state, who are well educated,” he adds.