The NCB said it was 'clear from her statement' that Rhea Chakraborty is an 'active member' of the drugs syndicate connected with drug supplies. 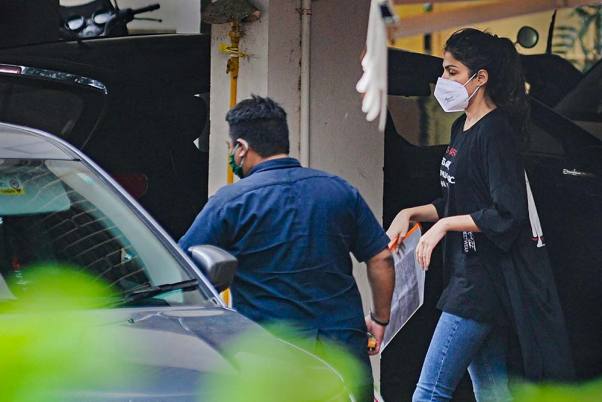 After three days of interrogation, the Narcotics Control Bureau (NCB) on Tuesday arrested Rhea Chakraborty in a drugs case linked to actor Sushant Singh Rajput's death, following which she was sent in judicial custody till September 22 by a local court.

The court rejected Chakraborty's bail application. The NCB told the court that she was an "active member" of a drugs syndicate and procured drugs for Rajput, her boyfriend.

The NCB, however, said it did not want her custody as it had already questioned her for three days.

Her lawyer Satish Maneshinde said they will approach sessions court for bail.

After producing her before the additional chief judicial magistrate through video link, the NCB told the court that she was confronted with all other accused including her brother Showik during her interrogation and facts in their statements were verified.

Rhea disclosed her involvement in procurement of drugs for Rajput and related financial transactions and also her instructions to co-accused Sammuel Miranda, Dipesh Sawant and Showik Chakraborty, it claimed.

Also Read: Sushant A Drug Addict? Is This Justice?

"Therefore, it is clear from her statement that Rhea is an active member of the drugs syndicate connected with drug supplies," the agency said.

After the arrest, the 28-year-old Rhea was taken for medical tests including COVID-19 test to the civic-run Sion hospital in Central Mumbai. Before leaving for hospital in a vehicle with NCB officials, the actor, clad in black, waved at media persons.

At the hospital, her antigen test for COVID-19 came out negative, officials said.

She was then taken to the NCB office in south Mumbai around 7.15 pm, to be produced before the court through video-conference.

But no contraband was recovered from her and the NCB doesn't need her custody for interrogation, he said.

"(The Persons) with whom we had to confront her, they were already in our custody. We are calling her for questioning for the last three days and after her interrogation we are satisfied," he said.

In the morning, when Rhea reached the NCB office at Ballard Estate in South Mumbai around 10.30 for questioning, she was seen carrying a bag.

In her TV interviews, she has maintained that she never took drugs.

Her lawyer Satish Maneshinde called her arrest a "complete travesty of justice.

"Three central agencies hounding a single woman, just because she was in love with a drug addict and a person suffering from mental health issues," he added.

Rajput, who allegedly hanged himself at his Bandra residence here on June 14, had been treated by five leading psychiatrists in the city, Maneshinde claimed.

Rhea was recently interrogated by a CBI probe team as she is the main accused in the abetment of suicide case filed by Rajput's father, and also questioned by the Enforcement Directorate in a money laundering case.

She has denied all the allegations many times.

Sushant A Drug Addict: Is That Justice Or Injustice?