Much credit for the rise of the Jana Sangh, the predecessor of the BJP, to the status of a mainstream political party goes to its collaboration with JP, a lifelong socialist who had taken a Gandhian turn, in the 1970s and the Lohia socialists and Lok Dal in the 1960s. 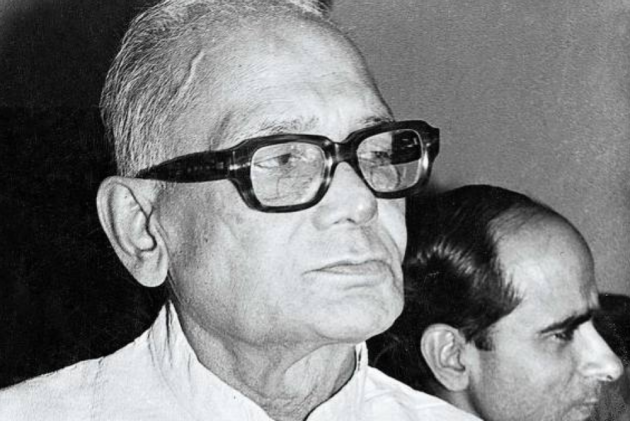 On this very day in 1979, Jaya Prakash Narayan, veteran freedom fighter and the leader of the JP movement of 1974-75 against Indira Gandhi’s government, passed away.

Forty-two years after his death, BJP president JP Nadda took to Twitter early on Friday morning to pay tributes to JP in Hindi. Roughly translated, his tweet said, “Tributes on the death anniversary of Loknayak Jaya Prakash Narayan, who gave a call for ‘Total Revolution’ to rid the nation of an unfettered government that clamped the Emergency. Such a leader who devoted his entire life to defending the motherland and democracy will always be a role model for us.”

Indeed, much credit for the rise of the Jana Sangh, the predecessor of the BJP, to the status of a mainstream political party goes to its collaboration with JP, a lifelong socialist who had taken a Gandhian turn, in the 1970s and the Lohia socialists and Lok Dal in the 1960s.

“Participation in the JP movement is widely held to be the Jana Sangh’s entry into the cherished space of civil liberties,” political scientist Sajjan Kumar told Outlook.

In 1963, the socialists and the Jana Sangh fielded joint candidates on four seats in Lok Sabha by-polls to challenge the Congress’ formidable vote bank of the so-called upper castes, Muslims and Dalits. The new alliance had an alternative vote bank: the small urban and largely ‘upper caste’ support base of the Jana Sangh and the rising Hindu ‘backward caste’ base of the socialists. Ram Manohar Lohia won the poll as the joint opposition candidate from Farrukhabad in UP. However, the Jana Sangh’s Deen Dayal Upadhyaya lost his election despite the alliance.

In 1967, the socialists, the Jana Sangh, the Rashtriya Kranti Dal of Charan Singh -- who had left the Congress the same year -- and even the CPI (M) came together in states like UP and Bihar in the legislative assemblies to form short-lived governments on the plank of ‘anti-Congressism’.

“The anti-Congress alliances that the Jana Sangh and the socialists wove together also marked the rise of the backward castes as an electoral force. These groups and the Jana Sangh’s small Hindutva base could together become electorally viable,” Sajjan Kumar contends.

However, JP, who had quit politics long back, was involved in social, constructive, work in these days.

His re-entry into public life took place in 1974, when a broad student opposition group, the Chhatra Sangharsh Samiti, protesting against the Congress government in Bihar met him to seek his leadership for their movement.

KN Govindacharya says this happened just after students tried to storm the Patna Legislative Assembly on March 18, 1974. The police resorted to firing, which killed some students.

Talking to Outlook at VP House in the national capital, he jogs his memory to recall details of the fateful day, which would lead to the iconic JP movement against Indira Gandhi. Govindacharya was on the spot as an RSS pracharak.

“The police seemed to be getting the upper hand. Just then, a young activist called Akshay Singh, a resident of Palamu, drove a bus filled with stones into the ground that separated the road from the assembly building. This tilted the scales yet again in favour of the students,” Govindacharya recalls. He remembers a girl from Maharashtra, Lata Kamat, who stepped out right between the clashing police and students, not fearing for her life. However, in the police firing, three students were killed.

After this, Govindacharya went to meet Jaya Prakash Narayan, with whom he had worked in Bihar draught relief some years back, asking him to join the movement. A delegation of 13 youth met JP a second time.

JP initially said, Govindacharya recalls, that the protesters were violent people. Govindacharya defended them, claiming Congress ally CPI and the ruling party were behind the chaos. As “proof”, he asked JP why only the offices of Pradeep and Searchlight, both pro-agitation, were torched, and not those of pro-government publications Aryavarta and Indian Nation.

JP agreed to lead the movement, making non-violence a condition.

JP’s entry added a spark to the movement, from Patna to Delhi. The tide was beginning to turn against Indira Gandhi, as JP addressed mammoth rallies. To add to the Prime Minister’s discomfiture, the Allahabad High Court held her election to Rai Bareli null and void. The Supreme Court gave her limited relief: she could attend Parliament but not vote there.

With the situation deteriorating, Indira Gandhi imposed the Emergency on the midnight of June 25, 1975, and opposition leaders were jailed. Pre-censorship of the press also began. Controversial policies like forced vasectomy and the bulldozing of Turkman Gate in Delhi were carried out.

Fresh elections were ordered in 1977 and Emergency revoked.

For the 1977 polls, the Jana Sangh, Charan Singh’s Bharatiya Lok Dal, the breakaway Congress faction Congress (O) and the Swatantra Party merged themselves to form the Janata Party, which defeated the Congress in the Lok Sabha elections held post-Emergency.

Internal ideological contests, however, ensured that the Janata government did not have smooth sailing. JP himself passed away in 1979.

The party was rocked by demands that Jana Sangh ministers could not also be part of the RSS at the same time. Eventually, the party split and Indira Gandhi stormed back to power. The Jana Sangh component of the Janata Party formed the BJP in 1980, and Vajpayee as party president sought to evoke the legacy of JP as a beacon for the party for some years. But, the massive defeat of 1984 convinced the BJP that its ideological distinctiveness could not be discarded.

However, the heady 1970s weren’t all that JP was about. He was one of the architects of the Congress Socialist Party formed within the Congress in 1934 to steer it in a more socialist direction. He acquired an aura of his own during the Quit India Movement. When the top leadership was arrested, JP and Aruna Asaf Ali continued to keep the movement alive underground.

Jawaharlal Nehru invited JP to be a part of his Cabinet, but JP wasn’t interested in holding office. Within years, he announced his retirement from politics and became a full-fledged social activist, practising Gandhian Sarvodaya and lending his helping hand for constructive work.

JP’s lasting political impact, however, has consisted in his acting as a bridge between the socialists and the Jana Sangh.

He initially had “misgivings” that the RSS was “communal”, Govindacharya told Outlook. “He asked me why there were no Muslim RSS pracharaks and I answered that even his Sarvodaya had just two Muslim volunteers. Does that make you communal, I asked him?”

Later, however, JP at the height of the Congress-JP movement duel even declared at a programme: “If the RSS is fascist, so am I.”

Nadda’s tweet is the most recent reminder of the debt that not only the socialist parties but also the BJP owe to JP.