Ram Jethmalani: Doyen Of Criminal Law And Politician With Colour

Ram Jethmalani was famously known as the doyen of criminal law in the country. His tryst with the subject started at the young age of 18 and he practiced it for nearly 60 years. 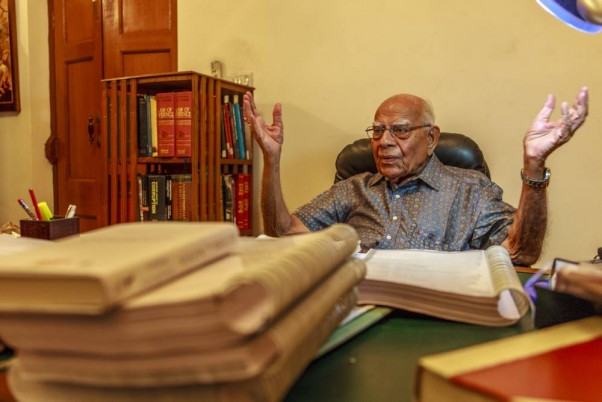 Ram Jethmalani and criminal law are so often synonymous and the lines between the two are often so blurred that it's tough for a legal intern not to mistake one for the other.

Jethmalani was famously known as the doyen of criminal law in the country. His tryst with the subject started at the young age of 18 and he practiced it for nearly 60 years.

The former Union law minister died early on Sunday morning after continuous deterioration in his health in the last two weeks. According to the staff at his home, he had been ill since the past few months.

Born on September 14, 1923 in Sikhapur town of Sindh province, Jethmalani moved to India before Partition. In school, he got a double promotion, which helped him complete his matriculation when he was just 13. He went on to secure an LLB degree at the age of 17. And due to a special resolution, he became a lawyer at the age of 18.

Jethmalani was known for his robust arguments and fought many high-profile cases in the Supreme Court, High Courts in many states and even trial courts. His physical presence inside a court, particularly trial courts, used to be so intimidating that people embroiled in legal cases would be willing to pay him through their noses to have him fly to distant places and appear for them.

He is particularly remembered for his arguments in the 1959 K.M. Nanavati vs State of Maharashtra case, in which he was the prosecutor.

Jethmalani also fought several other high-profile cases, one of which stands out -- he had appeared in defence of Rajiv Gandhi's killer in the Madras High Court in 2011.

Jethmalani also defended Harshad Mehta and Ketan Parekh in the Securities scam of 1992. He had also strongly defended the death sentence given to Afzal Guru, the 2001 Parliament attack accused, and represented Manu Sharma in the Jessica Lall murder case. In 2010, he was elected as president of the Supreme Court Bar Association.

Jethmalani's political side was no less fascinating than his illustrious legal career.

He flirted with the Jan Sangh, the BJP, and also contested Lok Sabha elections as an independent. He was elected to the sixth and seventh Lok Sabha from the BJP and held the portfolios of law, followed by urban development in two Atal Bihari Vajpayee-led NDA governments.

But before that, what brought him to political limelight was his stiff opposition to prime minister Indira Gandhi during the Emergency, a fact that even Prime Minister Modi mentioned in his tweet condoling Jethmalani's death on Sunday.

Jethmalani was then the chairman of the Bar Association of India. His sharp criticism of the Emergency led to an arrest warrant against him. But rather than courting arrest, Jethmalani opted for self-imposed exile in Canada. He however, didn't stop criticising Indira Gandhi and it became the bedrock of his political stint.

As an independent, he lost from Ulhasnagar despite Shiv Sena and Jan Sangh support. Later, in 1980 when the Janata Party swept to power after Emergency, he won from the Bombay north west. It's another matter that he lost in 1985. He became a Rajya Sabha member in 1988.

But before being sworn in as a RS member, in 1987, at the age of 64, Ram Jethmalani announced his candidature for the President's post. He also launched a political front called, Bharat Mukti Morcha.

In 2004, he contested from Lucknow against Vajpayee, whom he never got along well even while serving as a minister in his Cabinet. He lost that election. But in 2010, he was back as a BJP Rajya Sabha member and many of his speeches even then had the treasury bench listening carefully.

His divorce with the BJP in 2012 started with a letter to then party president Nitin Gadkari. The tone and tenor of the letter was quintessential Jethmalani. His public barbs against the saffron party became more harsh and direct. And in the followimng year, he faced action when BJP had expelled him for six years for 'anti-party activities'.

But that didn't come in the way of Jethmalani's personal rapport with Modi or L.K. Advani. Advani would still be found attending his gatherings in Delhi. Even Modi held him in high esteem till the last day, says BJP insiders.

As Jethmalani bid adieu to the world, India lost a man who could speak his mind.