Gurjars in Rajasthan demand 5% reservation as a Most Backward Class. 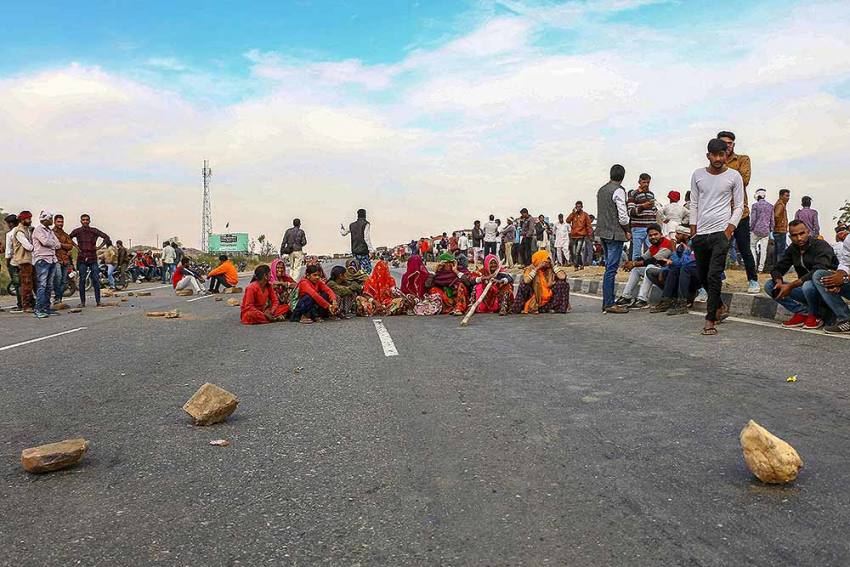 The Gurjar agitation in Rajasthan over demands of reservation entered the sixth day, however, Congress government in the state is yet to find any breakthrough.

The large-scale agitation which began on November 1, spearheaded by 85-year-old Gurjar leader Col. Kirodi Lal Bainsla, a former Lieutenant Colonel of the Indian Army, demands notifying backlog vacancies as per the agreement. The demands include 5  per cent reservation in all in-process recruitment of Gurjars as a Most Backward Class (MBC), government job and compensation to the family members of three victims who were injured in police action during the agitation and subsequently died in past years. Prior to the protest, Bainsla, after holding a meeting with Gurjar mahapanchayat on October 18 had given an ultimatum to the Ashok Gehlot government to accept their demands failing which he kicked off the protest.

"Congress government has cheated on us. Despite keeping our demands in their assembly election manifesto, they are now dilly-dallying. We are sitting on the tracks to raise issues pertained to the appointments to backlog posts and extension of the benefit of 5% reservation as a most backward class (MBC) in the ongoing recruitments. The other demands include reservation included in the 9th schedule of the Constitution passed by the Assembly last year under the Ninth Schedule of the Constitution and budget for development works in Devnarayan Board including hostels and education facilities for the Gurjar community youths", Vijay Bainsla, Gurjar leader and son of Col. Bainsla told Outlook.

Govt yet to find any breakthrough

Over 500 protestors hit the railway tracks in Bayana on the call given by Sangharsh Samiti convener, Colonel Kirori Lal Bainsla. The agitation has affected traffic on the highway and Delhi-Mumbai rail route due to which many trains were suspended while some were diverted via Bandikui, Jaipur. Similarly, the bus services in Karauli, Sawai Madhopur, and Bharatpur have been suspended. The agitation is also affecting students and employees in the districts as the government has suspended the internet for the last six days.

In the last five days, state minister Ashok Chandana who represents the community reached the protest venue to pacify the agitation. "We clearly told him that we are going to vacate the tracks after the issue of the backlog appointment and five percent reservation to MBC in the jobs is settled", Col Bainsla told Outlook.

After Chandana, the government had sent another delegation headed by labour secretary Niraj K. Pawan, who stayed in Bharatpur district for two days to hold talks with the Gurjars. However, the meetings remained inconclusive.

Unlike previous protests, when the community leaders used to stand together, this protest has witnessed a huge divide between two factions. While members of the Gurjar community under the leadership of Col Bainsla continue to block the Delhi-Mumbai rail route in Bharatpur over demands of reservation, another delegation of Gurjar leaders led by farmer leader from Dausa, Himmat Singh Gurjar met inspector general of police Sanjiv Narzari and Bharatpur district collector Nathmal Didel and agreed to lift the blockade.

Himmat Singh Gurjar had met Rajasthan health minister Raghu Sharma on October 31. A delegation of Gurjar Aarakshan Sangharsh Samiti consisting of 80 villages, civil and public representatives held discussions with the Cabinet Sub-Committee in Jaipur, in which 14 points were agreed upon. "We are hopeful that the government will act on these 14 points discussed with us. Hence there is no reason to protest", Himmat Singh told Outlook.

However, the faction headed by Bainsla has stated the fourteen points as 'useless'. On asking if the community is divided, he said "We are one. There are no factions. Our demand is what Gurjar demands", Col Bainsla added.

The divide in the community is also evident by the smooth flow of rail and road traffic in Dausa district, the hometown of Himmat unlike Sawai Madhopur and Bharatpur.

The political experts also attribute the divide in the community to different political affiliations of both these leaders. Kirori Singh Bainsla, who spearheaded Gurjar agitation in Rajasthan since 2007, joined BJP for the second time along with his son ahead of 2019 Lok Sabha polls. His son Vijay Bainsla also joined. This was an attempt made by the BJP to garner Gurjar votes which influence as many as seven Lok sabha constituencies. In 2009, he had joined the BJP and contested Tonk-Sawai Madhopur seat but lost to Namo Narain Meena of Congress. However, in 2019 assembly polls, he had supported the Congress party.

On the contrary, Himmat Singh Gurjar is a Congress supporter and was also eyeing a ticket from Dausa in the 2018 assembly polls.

The Assembly had passed the Rajasthan Backward Classes (Reservation of Seats in Educational Institutions in the State and of Appointments and Posts in Services under the State) Amendment Act, 2019, on February 13 last year. The four other nomadic communities given the quota benefit along with the Gurjars were Banjara, Gadia-Lohar, Raika, and Gadariya.