Rahul Gandhi, who is holding a series of tractor rallies under his 'Kheti Bachao Yatra' in Punjab to protest the Centre's new farm laws, also took on Prime Minister Narendra Modi, saying he has not spoken "a word" on the Hathras incident. 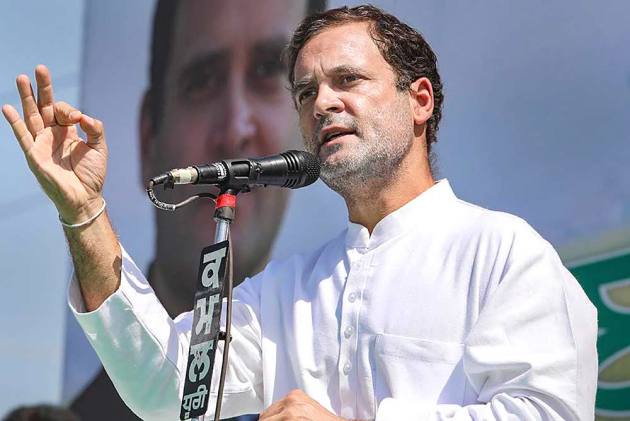 Congress leader Rahul Gandhi attacked the Uttar Pradesh government on Tuesday, saying Chief Minister Yogi Adityanath should have the decency to call the alleged gang rape and killing of a Dalit woman in Hathras district a tragedy.

Gandhi, who is holding a series of tractor rallies under his 'Kheti Bachao Yatra' in Punjab to protest the Centre's new farm laws, also took on Prime Minister Narendra Modi, saying he has not spoken "a word" on the Hathras incident.

"The Chief Minister of Uttar Pradesh should have the decency to say this is a tragedy and will look into it and will protect this family and this girl," Gandhi told reporters here.

He was asked by a reporter for his reaction over the Uttar Pradesh government report saying that there was an "international conspiracy" to defame it.

"Yogi Ji is entitled to his opinion. He is more than welcome to imagine whatever he wants to imagine. What I saw there was that a lovely girl was molested, her neck was broken, her family was threatened and the people who did it, no action was taken against them," he said.

"If Yogi Ji sees it as an international conspiracy, well that is fine, that is his prerogative. What I saw was a tragedy," Gandhi said.

Before his tractor rallies, Gandhi visited the Hathras victim's family on his second attempt after being dramatically stopped outside Delhi by the Uttar Pradesh Police.

Gandhi said he visited the family and wanted them to know that they are not alone.

"I told the family that I have not come for you alone. I came here for your daughter. There are lakhs of women across the country who are harassed every day, thousands who are raped. I am also here for them as well," he said.

Gandhi said that "a child is raped and murdered, but the whole administration attacks the family and country's prime minister does not utter a word".

The 19-year-old Dalit woman was allegedly gang-raped and brutalized in Hathras district of Uttar Pradesh on September 14. She died a fortnight later.

The victim was cremated near her home on September 30. But her family alleged that they were forced by the local police to conduct her last rites in the dead of the night.

Police, however, said the cremation was done "as per the wishes of the family".

On he and his sister Priyanka Gandhi Vadra, who is a Congress general secretary, being allegedly pushed around and manhandled on way to Hathras and FIRs being registered against a large number of Congress workers, Gandhi said what he and his party men and women suffered was minor compared to what the victim's family was going through.

"The entire country is being attacked, thrashed. If I was pushed, it is not a big deal. It is our duty to protect the people and stand with them. It is such a government that if we stand, we will be pushed around, we will face 'lathis', being pushed around, that's okay," he said, adding that it was the victim's family that suffered an "unimaginable" jolt.

On why he was not present in Parliament during voting on the new farm laws, Gandhi said he was a son too and had a son's duty for his mother.

"My mother (Sonia Gandhi) had gone for a medical check-up and my sister couldn't go with her because some of her staff members had COVID. So, that is why I was with my mother, I am her son also and I have to look after her," he said.

Gandhi said that the Shiromani Akali Dal, which had worked with the BJP for many years, had helped the government in passing the contentious bills. "Punjab's farmers know this," he said.

President Ram Nath Kovind has given his assent to the Farmers' Produce Trade and Commerce (Promotion and Facilitation) Bill, the Farmers' (Empowerment and Protection) Agreement of Price Assurance and the Farm Services Bill; and the Essential Commodities (Amendment) Bill, which were passed by Parliament last month.