Those behind the "vicious attack" of note ban are yet to be brought to justice, says the Congress leader. 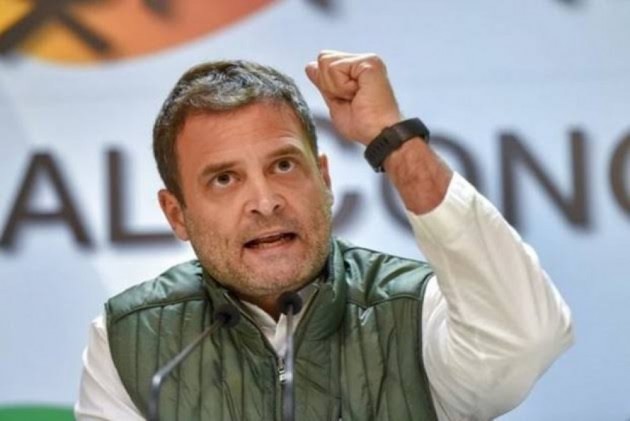 Terming demonetisation as a "terror attack", Congress leader Rahul Gandhi on Friday said those behind the "vicious" assault have yet to be brought to justice.

His attack on the government came on the third anniversary of demonetisation.

On November 8, 2016, Prime Minister Narendra Modi announced to the nation that Rs 500 and Rs 1,000 currency notes would cease to be a legal tender.

"It's 3 yrs since the Demonetisation terror attack that devastated the Indian economy, taking many lives, wiping out lakhs of small businesses & leaving millions of Indians unemployed," Gandhi said in a tweet.

Those behind this "vicious attack" were yet to be brought to justice, the former Congress president said, using the hashtag  'DeMonetisation Disaster'.

"Sultan Muhammad bin Tughlaq rendered the country's currency useless in the year 1330. Today's Tughlaq did the same on November 8, 2016," he said in a tweet.

"3 years have passed and the country is suffering because- economy collapsed, employment lost. Neither terrorism stopped, nor the business of fake notes," he said, and asked who is responsible.

Surjewala also cited global rating agency Moody’s lowering the outlook on the government of India's ratings to negative, to claim that demonetization was a "man-made catastrophe".

He questioned the "silence" of those in power on the third anniversary of demonetisation.

Congress leader Priyanka Gandhi also slammed Modi government, saying that demonetisation proved to be a "disaster" that has all but destroyed the economy.

"3 years since Demonetisation and every claim made by the government and those hailing it as a slayer of all evils has been turned on its head. It proved to be a disaster that has all but destroyed our economy," she said in a tweet.