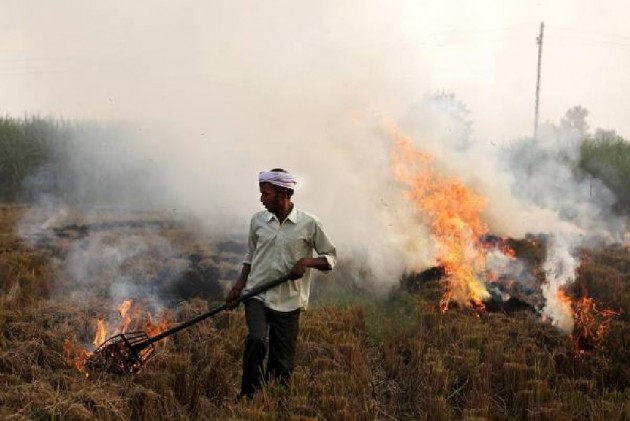 Punjab has recorded a stark 25 per cent increase in stubble burning incidents this year as compared to 2018 despite a ban on the practice in the state.

The Punjab government has attributed the surge in stubble burning to early harvesting of paddy crop this time. The burning of crop residue in Punjab and Haryana is a major contributor to air pollution in both the states as well as national capital Delhi and its recent increase is expected to spike pollution levels.

The number of farm fires in Haryana, however, has decreased by 10 per cent as compared to last year, due to the "moderate implementation of the ban on stubble burning due to elections", according to officials.

A significant rise in stubble burning was recorded in Punjab on October 19 and 20. While 446 cases were reported on October 19, the number on October 20 touched the 500 mark.

Farmers in Punjab and Haryana continue to defy the ban amid lack of both accountability and financial incentives.

State governments are providing 50 to 80 per cent subsidy to farmers and cooperative societies only to buy modern farm equipment for in-situ management of paddy straw. But they are running a massive awareness campaign against stubble burning.

A Punjab government official, who did not wish to be named, said the high court's September 19 order staying the recovery of fine from farmers found violating the ban on stubble burning has subdued the effect of challans. "Not one challan has been issued this year," he said.

However, Karunesh Garg, member secretary of the Punjab Pollution Control Board, said the court had only stalled the recovery of fine imposed in previous years and that challans will be issued this time too.

"The single bench referred the matter to the court of chief justice who has categorically said that stubble burning is banned. The government has also made it clear and issued strict directions to curb farm fires," he said.

"We have identified the erring farmers and the process of issuing challans has been set in motion," Garg said.

Another official on condition of anonymity said that bypolls in some parts of Punjab "prevented the government from issuing challans this year".

"This year, the harvesting began around a week earlier as compared to the last year. That's the reason the number of farm fires looks big. I am sure the cumulative figure at the end of the harvesting period will be much smaller," he said.

The Centre and the state government have made serious interventions, provided farm equipment and undertaken massive awareness drives to prevent stubble burning.

If not this year, the problem will be completely resolved in the next two years, Pannu said.

According to Punjab Pollution Control Board data, Tarn Taran, Amritsar and Patiala have recorded 450, 417 and 249 cases, respectively.

Karnal, Kaithal and Kurukshetra have reported 543, 503 and 422 incidents of stubble burning, respectively, till October 20.

The period between October 15 and November 15 is considered critical as maximum number of stubble burning incidents take place in this span in Punjab and adjoining states, which is one of the main reasons for the alarming spike in pollution in Delhi-NCR.

Haryana Pollution Control Board Member Secretary S Narayanan said 102 challans have been issued against farmers for violating the ban on stubble burning, but the recovery of the fine has been put on hold following the high court order.

"The number of farm fires has gone down considerably, despite the harvesting season starting early and the official machinery being busy in elections," he said.

The Delhi government has repeatedly attributed the spike in pollution in winter to rampant stubble burning in neighbouring states.

"Air quality in Delhi has been good or moderate for the last seven-eight months, but they (pollution levels) have starkly gone up now... Clearly, the sudden spike in pollution is a result of smoke coming from outside," Delhi Chief Minister Arvind Kejriwal had said earlier.

The Delhi government has also tied up with Washington University and set up a centre near India Gate to collect data which would help in assessing the degree of air pollution due to specific sources from April next year.