Home  »  Website  »  National  »  When The Law Is Equal, How Do Cops Often Get Away With Their Crimes?

When The Law Is Equal, How Do Cops Often Get Away With Their Crimes?

The killing of George Floyd by a police officer in the US is still fresh in world consciousness. And yet another ghastly incident of police brutality takes place, in our own southern state of Tamil Nadu. Why don't the cops fear the law? 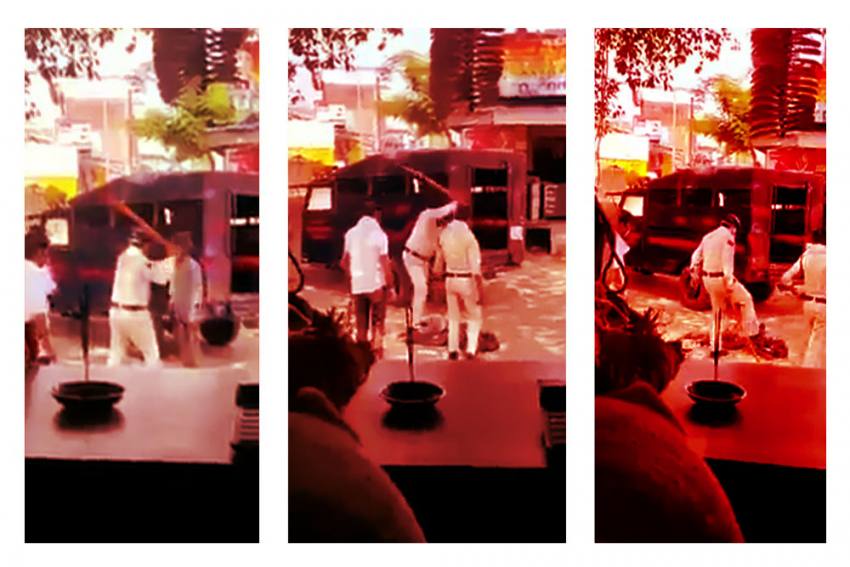 Stills from the viral video of a cop assaulting a man in Madhya Pradesh's Chhindwara.
Salik Ahmad June 27, 2020 00:00 IST When The Law Is Equal, How Do Cops Often Get Away With Their Crimes? 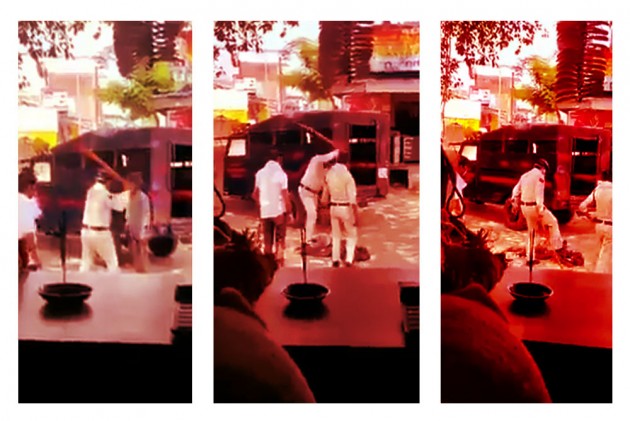 The alleged custodial torture of a man and his son in Tamil Nadu’s Thoothukudi leading to their deaths this week has turned the spotlight once again on crimes committed by the police. The duo was arrested on June 19 for keeping their shop open beyond the permitted hours.

While police excesses of this magnitude evoke outrage, everyday incidents of lesser magnitude is something that most people, or at least those from the weaker socio-economic sections, have resigned themselves to. So what gives the cops a sense of impunity that they keep exceeding their authority?

A month ago, a video of a cop brutally beating a man went viral on the Internet. It was from Chhindwara in Madhya Pradesh (MP). The cop can be seen hitting the man – who does not retaliate or protest at any point – hard with the stick on his neck, arms, legs, until the man falls down and apparently loses consciousness. The cop strikes him a few more times, and then kicks the man’s face.

In the wake of the outrage the video caused, the cop was suspended and a departmental enquiry (DE) was initiated. A month later, he was found guilty by the department, demoted from head constable to constable, and received a reduction in pay, Chhindwara superintendent of police (SP) Vivek Agarwal told Outlook. However, no FIR was lodged against him.

Now, what if a similar assault was carried out by a civilian, caused public outrage, and prompted senior police officials to act? Would they have been content with the person’s employer demoting him and reducing his pay? Perhaps no. They would have probably lodged an FIR against the person under section 325 (grievous hurt) of the Indian Penal Code, and added the usually accompanying sections 506 (criminal intimidation) and 294 (obscene language) – all three of them cognisable offences.

So why does it seem there are two different standards for the application of law?

“If during duty, a minor offence is committed by a lower level police person, it is normally treated as dereliction of duty by senior police officials. And in most such cases, nobody pursues them, so they are dealt with by a DE,” explains Anand Lal Banerjee, former director general of police, Uttar Pradesh. “But when it’s a serious or a heinous offence, and the senior officials want to set an example to ensure that it is not repeated, they file an FIR.”

While a DE is on, the delinquent police person is usually suspended so that they do not interfere with the enquiry. “Although suspension is not a punishment, it’s certainly a major embarrassment for the person. They get socially marked out and only get subsistence allowance, which is half their pay, during the period,” says Banerjee.

If the person is found guilty in the DE, they can either be given minor punishment, for instance, censure entry in their annual confidential report; or major punishment, which could be reduction in rank, paygrade, or even dismissal.

The regulations of MP police say that for cognisable offences, the police persons shall be prosecuted as ordinary individuals. But for non-cognisable offences, their prosecution is to be “deprecated” or disapproved. A criminal court, the regulations note, will award either fine or imprisonment, and the latter could lead to dismissal. Both an economic blow and dismissal can be meted out “departmentally, and all therefore, that can be gained by a criminal prosecution is a few months imprisonment, which ruins the man's reputation and may possibly turn him into a bad character for life.”

But some exceptions to this rule regarding non-cognisable offences are also listed: cases in which “the offender is of incorrigibly bad character”; “cases of escape from lawful custody due to culpable negligence or collusion”; or “cases of peculiar aggravation in which the interests of public justice demand a public prosecution and trial”. These exceptions give the senior police officials a fair amount of latitude as regards prosecution of their subordinates.

Another thing that gives them discretion is the provision of sanction for prosecution. Under section 197 of the Criminal Procedure Code (CrPC), the prosecution of a public servant for a criminal act done in the course of duty cannot happen without the sanction of a competent officer. For example, in the case of a police inspector, the competent officer is the deputy inspector general (DIG). The rationale behind this sanction is to save the person from frivolous or malicious cases, and ensure that working of the government or law enforcement agency is not hampered.

However, the provision of sanction has been diluted by several court judgments. One of them was the 2006 Supreme Court judgment in the Parkash Singh Badal vs State of Punjab case, which noted, “The principle of immunity protects all acts which the public servant has to perform in the exercise of the functions of the Government. The purpose for which they are performed protects these acts from criminal prosecution. However, there is an exception. Where a criminal act is performed under the colour of authority but which in reality is for the public servant's own pleasure or benefit then such acts shall not be protected under the doctrine of State immunity.”

“Now which duty requires a police person to brutalize an unarmed man? Look at the killing of Faizan in the February Delhi violence. He was lying helplessly on the ground and yet being assaulted by the police,” says Vrinda Grover, a practising advocate at the Supreme Court. “And many a time the sanction for prosecution is not given by senior officers – it wasn’t in the Ishrat Jahan fake encounter case. Does this not suggest that the state condones extrajudicial violence and torture?”

A major hump that an aggrieved civilian has to cross while seeking action against a police person is in getting an FIR registered. The story of Deepak Bundele, a lawyer from Betul in MP is a case in point. On March 23, the police allegedly beat up Bundele while he was on the way to hospital to get medicines – he has been suffering from diabetes for over 15 years. His ear started bleeding profusely from the blows he took at the hands of the police.

“I told them to stay within their constitutional limits and arrest me if they thought I was doing anything wrong. ‘Samvidhan iski ***** mein bhar do (shove the constitution up his ***),’ one of them said and they started raining sticks on me,” says Bundele. The next day, he says, he went to meet the SP and submitted a complaint requesting that an FIR be lodged against the cops who had beaten him. “I was told that they could condemn the act but won’t file an FIR.”

On May 17, two cops came to Bundele’s house to speak to him. Bundele recorded the conversation. One of the cops said that Bundele was beaten as he was assumed to be a Muslim because of his long beard. “Whatever happened to you happened unknowingly … That person [who beat you] is a staunch Hindu … Whenever a Muslim is arrested during Hindu-Muslim riots, he always beats them up brutally,” the cop can be heard saying. They also apologised and requested him to officially state that he wasn’t beaten.

When these remarks were reported in the press, the Betul police suspended the erring cop for his “inappropriate remarks” and a DE was initiated. But strangely, no action was taken against the cop who allegedly assaulted Bundele.

Betul additional SP Shraddha Joshi told Outlook that the cop in question had noted in his daily report that an altercation happened between him and Bundele; and the latter said that he was a lawyer and would have the uniform stripped off the cop’s body. “So there are both sides to it. We censured the cop for not informing senior officers about the incident,” said Joshi.

Asked if an FIR was filed on basis of Bundele’s complaint, she says that it wasn’t because Bundele “initially wasn’t able to state clearly what had happened.”

The lawyer has filed a writ petition in High Court seeking that an FIR is lodged and a police complaints authority be established at the state level. He says the police are pressuring him through his acquaintances to withdraw the case.

This raises the question as to why the police are reluctant to file FIRs. “Cops as a habit, rule, and nature, do not want to register FIRs. The simple reason is that the crime figures go up if they file them. So by suppressing the numbers, they try to give an impression that crime is under control,” says Banerjee. “And understandably, they are even more reluctant to file an FIR against a fellow cop. However, once an FIR is lodged, it’s treated like any other.”

Let alone minor offences, the police do not lodge an FIR against the police team even in cases of encounter deaths or extrajudicial killings, despite Supreme Court guidelines to the contrary, says Grover. “It is left to the victim’s family, mostly vulnerable and disempowered, to approach the High Court or Supreme Court for registration of FIR and an impartial investigation. The criminal law does not make a distinction between a police person and a civilian. However, the police have over time perverted and manipulated the legal process to grant themselves immunity from investigations, thereby ensuring impunity,” she adds.

“And the DEs are hardly sufficient. In the Hashimpura massacre, the worst case of custodial killing in India, the DE was never held; the internal mechanisms exonerated all the accused PAC men. In fact, we see such a cozy nexus between the police and the State that police officials who commit encounters are not just protected departmentally, but are often promoted and awarded. The absence of an independent, professional investigating agency is a serious crisis confronting the legal system," Grover says.