For a nation used to seeing him in his trademark Modi jacket, this was Modi in a typical Tamil avatar. 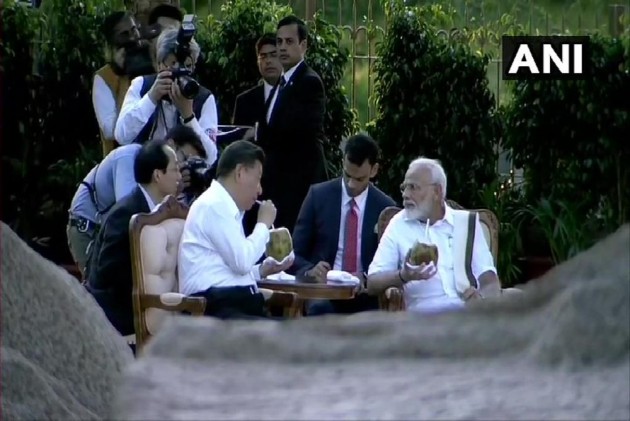 Informality was the hallmark at Mamallapuram town on Friday afternoon as Prime Minister Modi received and showed Chinese President Xi Jinping around the rock-cut marvels of this historic Pallava town.

Modi had arrived ten minutes early and was dressed in a veshti, white shirt and a long angavastram draped on his left shoulder to receive his Chinese counterpart. For a nation used to seeing him in his trademark Modi jacket, this was Modi in a typical Tamil avatar – looking quite at home in the veshti and sending yet another message to the Tamils to whom the BJP and its leadership has been vilified as an alien force, inimical to Tamil culture.

If the choice as Mamallapuram had sent out the right cultural vibes to the state, Modi’s sartorial choice further underlined the Tamil connect having earlier welcomed Jinping in three languages including Tamil on Friday morning. The veshti and shirt also struck a ring of informality which was matched by the Chinese president who too looked his informal best in white full sleeve shirt and black pant.

After the two shook hands warmly and exchanged pleasantries, Modi walked the Chinese leader first to the massive bass relief and cave called Arjuna’s Penance. Modi was seen explaining the antiquity and intricacies of the sculpture, as the two strolled across the place accompanied only by their interpreters. Surely, he would have recalled the town’s special connection to China from the 5th century AD when the Pallava kings had trade and even political ties with the Chinese. “The Chinese influence could also be found in the Tiger Cave at Mammallapuram as you are welcomed by dragon faces carved around the entrance,” recalled noted archaeologist R. Nagaswamy.

After a brief stopover at Krishna’s Butter Drop – actually a giant round monolith cut from a rocky outcrop - Modi then conducted Jinping through Five Rathas – said to represent the five Pandava princes. After walking around the site, the two sat down on chairs and sipped some tender coconut water even as Modi maintained his refrain. It was here they were immersed in a long chat.

As the evening descended and the setting sun glistened on the western horizon, the two leaders drove towards the giant shore temple – another wonder in stone and virtually the signature building of this iconic tourist spot. The manicured lawns around the shore temple was the stage for the evening’s cultural show that included traditional dance and music and folk arts from the deep interiors of Tamil Nadu. This was followed by a large spread of South Indian dinner at the beach resort where the two leaders would be meeting again on Saturday morning.