A Social Pandemic Festers At The Core Of Medical Crisis

Will the eventual recovery from the virus also be a form of social resolution, a victory for the government, and a reunion of our varied classes and underclasses? 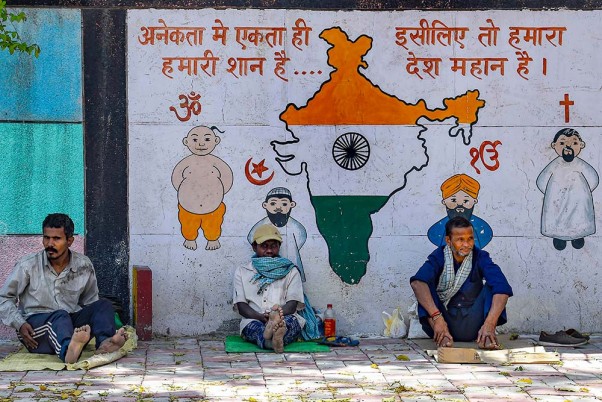 It is hard to believe that despite our decades of negligence of global concerns -- climate change, excessive consumption, glaring inequities, refugee crises, petty nationalism, and dysfunctional governance -- it needed an unseen and silent enemy to expose our failings. Ironically, the Coronavirus stealthly ensured that its message was loudest in the most unlikely, clinically sterile and overprotected of places. The singularly treacherous suffering it has inflicted on America gives vent to the idea that some attacks are so insidious, so lethal that even the most disturbing of fictions is unable to conjure up a plausible narrative.

Look at the protective camouflage worn by American frontline workers battling the Pandemic -- blue suits, masks and impenetrable headgear, not unlike soldiers outfitted for night battle in Afghanistan. With eerily empty streets, the war rages in hospitals. And as in any covert operation, there is genuine bewilderment at the enemy’s unknown reach, its guerrilla tactics and invisible force strength; only the eventual results are visible – people dying alone in care homes, mass graves hastily dug. The number of dead tells one story in America, another in Wuhan, China, an altogether different one in India. Beyond the lockdowns of whole countries, the story’s eventual outcome is yet to meet its match - in human terms, in medical science, in financial and cultural assets. But for now, victory has never been more uncertain.

A pandemic demands the greatest transparency, but has sadly pushed our government into greater opacity. What is the value of leadership that is itself choked by fear and uncertainty? When America is faced with the worst-case scenario: shortage of medical staff, face masks and ventilators, then can India - with five times its population and a hundredth of its medical equipment and doctors – afford to be complacent? Where does India’s extra 2-billion-dollar Covid fund stand against America’s 300 billion? This is the half-hearted dispirited reaction of a government that spends - at 0.9 per cent of GDP – less on a national health budget, more on infrastructure and monumental statues ($ 300 million on Sardar Patel, $400 million on Shivaji). This indeed is the response of a country which in the grip of the direst medical emergency is willing to spend Rs 20,000 crore to redesign its parliament and sundry administrative buildings, rather than devise a long-term national health strategy. Can there be greater double-speak? Is compassion just a virtue of the poor?

The gap between public needs and federal expenditure has always existed but the divide becomes starker in times of crises. When the government is saddled with different and conflicting agendas, public trust is gained in careful coded symbols and language. Donate generously to the national relief scheme, the PM-CARES Fund. Come out to your balconies and clap. Shine a light into the night sky…prayer is the only answer to a crisis.

What the lasting effects of an extended lockdown are, will remain unknown for a long time. But its more immediate impact will be felt as two distinct curses. For the middle-class and the well-to-do, the long stifling confinement at home has brought an added fear to a life already loaded with middle class Indian prejudices. The huddle of the gated community will become more insular; the fear of the unfortunate other now will also add a new anxiety - the fear of the carrier other. The idea of cleaning your own home yourself is less repugnant when that fear stalks the premises. Any future mixing of people, when it happens, will be formed out of self-determined likenesses and similarities, expressed in smaller social groups, clubs, gyms, societies and monolithic communities. Medical uncertainty will doubtless force new forms of cultural cohesion.

The more serious repercussions, however, will be felt by the less settled, the newly settled and floating population - the Uber driver from a village in Rajasthan, the construction worker under the flyover, and the vendor pushing his cartload. Who will sit in a cab used by multiple riders? Who will buy similarly from a hand that has touched others? All such live trades formed out of intimate close range contact will perhaps die a natural death, only to be replaced by virtual on-line communication. Those that offer industrial products such as food items, furniture, electronics, even houses and cars, will perhaps change strategies equally dramatically, with scaled down operations and limited sales (Maruti-Suzuki recorded zero sales in April). With new patterns of construction, purchase and consumption, the migrant – already unsteady in the city – may never return from the village, or do so in more selective numbers.

At the core of a medical crisis lies a social one - a fear that drives everyone to self-protection and consequently social isolation. For so long the city has depended on the invisible server - hidden away in unknown recesses, under flyovers, edged against boundary walls, their daily appearance and disappearance, almost magical. That both sides knew their places was a clear sign that the two never seriously planned a future together. It was even hard to tell which of the two was the parasite, which, the host. In the cities already divided by economic and professional castes and religious patterns, the addition of yet another wedge was hardly needed. But the viruses’ long arm of influence will only increase polarities and suspicions, discredit former social and economic pacts, and only grudgingly foster new ones.

In battles with the virus being fought on the streets, in families locked in mohallas behind police barricades, the fear quickly revealed the rot festering in the underbelly. The rage against health workers, security personnel, and any form of authority was not the essential reprieve against claustrophobic boredom and suffocation, but a fight for survival. Hunger has always been a more lethal enemy than any virus. Eight to a room, social distancing was a laughable idea, and it rang a disturbing note in a society that constructs rules for its middle class, but happily ignores the silent majority. ‘Make sure you wash your hands with an alcohol based sanitizer, before sleeping eight-abreast on the sidewalk’.

When people are scared, they will do anything, obey no one or anyone; the psychological impact of fear cannot be easily explained. People willingly walk 500 kilometres to a home that may not be there; if they die on the way, so be it. For those in over-crowded buses hoping to cross state borders, the journey is from nowhere to nowhere. The urge for self–preservation defies logic, common beliefs or civility. Bereft of daily supplies, and without the cleaner and the washer, the absence has suddenly revealed the vast underclass of missing humanity. As housewives in Golf Links and Worli and Adayar take up the mop to scrub the floor, or cut vegetables their nameless staff are dying enroute to distant villages. Only in death is their identity revealed: Param Kumar, 31, of Jhansi, Ramesh Kohli 56, of Barmer. Those economically distant have always been socially distant; and will now be additionally physically distant.

How many people are infected by the virus, how many are dying, how many are actually dead, we will never know. The state is as complicit as it is inept and indifferent. The struggle to keep a government in place, however flawed, is herculean in a country always teetering on the edge of catastrophe. How is it even possible to exercise central control on a population the size of 56 Australias? If Indian population numbers cross two billion at the time of the next pandemic, what will happen? Will smaller parcels of local governance be more effective, or will the virus just kill many more? If the virus doesn’t kill, the famine could; who famine leaves behind could then be victims of hate crimes and communal violence; if not, then lynchings and custodial deaths.

In private circles the murmurs are loud and malicious. Migrants are giving us the virus; it’s all because of large Muslims gatherings. Hindus are always ready to blame others. Our reach in the last decades has gone beyond mere private immorality into new and agonizingly toxic forms of public nihilism. Wherever there are differences, they are compounded and exploited and dissected in new and devious ways. Guilt and blame resound daily on community walls. Across the board, the viral attack should have been a reason for unity, but in a seriously polarized society, it turned the country to mere stock taking, and ignited the self-loathing that lay simmering below the surface. That is not to deny many people’s innate humanity and goodness; the hurried mobilization of food and shelter is the ever-present other face of those with exceptional faith, and a willingness to connect in the most difficult of circumstances.

Will the eventual recovery from the virus also be a form of social resolution, a victory for the government, and a reunion of our varied classes and underclasses? Will the middle-class assume larger responsibilities for the wide circle of people under its care and influence? If anything, the end of the pandemic will only serve up some difficult questions. Do we stay in lockdown after the lifting, and emerge with added fear, our masks tied tighter, more suspicious of the other? Or would the long isolation have helped erase our selfish narrow-minded beliefs, so we can breathe easier into an altogether more hopeful society, more connected, aware of our similarities and common paths? It will take a deep faith and a generous imagination to reconstruct such a place.