Ahead Of July Deadline, Another 1.02 Lakh People Excluded From NRC In Assam

The NRC draft published on July 30, 2018 included the names of 2.9 crore people out of total applications of 3.29 crore. Forty lakh people were left out in the draft. 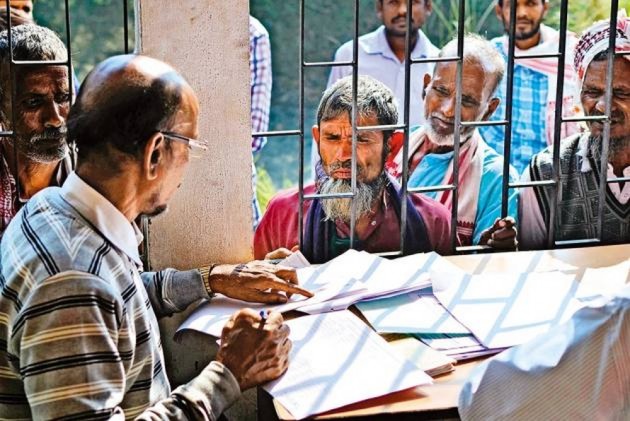 An additional exclusion list comprising the names of 1,02,462 persons to the draft National Register of Citizens (NRC) was published in Assam on Wednesday.

The persons whose names appear in the additional exclusion list are the ones who were included in the draft NRC published on July 30 last year, but subsequently found ineligible.

According to a statement issued by the state coordinator of NRC, the list has been published as per provisions of Clause 5 of the Schedule of the Citizenship (Registration of Citizens and Issue of National Identity Cards) Rules 2003.

NRC In Assam: A Neighbour Watches The Rolls

“As per provisions contained in Clause 5 of the Schedule of The Citizenship (Registration of Citizens and Issue of National Identity Cards) Rules, 2003, an Additional Draft Exclusion List consisting of 1,02,462 persons has been published today. The persons whose names appear in the Additional Draft Exclusions List are those persons whose names were included in the Draft NRC published on July 30, 2018, but have been subsequently found ineligible due to the following reasons,” state NRC coordinator Prateek Hajela said in a statement.

The Additional Draft Exclusion List will not contain the results of claimants and objectees appearing for hearings held for disposal of Claims and Objections during the period February 15, 2019 to June 26, 2019. The results of those hearings will be published only in the final NRC to be published on July 31, 2019.

The hard copies of the Additional Draft Exclusion List will be available for public view at NRC Seva Kendras (NSK), offices of the Deputy Commissioner, SDO (Civil), Circle Officer during office hours from Wednesday.

Particulars of the Additional Draft Exclusion List can also be viewed online in the NRC website www.nrcassam.nic.in starting at 10 am on June 26, 2019.

“Those persons who will be excluded will also be informed individually through Letters of Information (LOI) to be delivered at their residential addresses along with the reason of exclusion. Such persons will have the opportunity to file their Claims which will be disposed through a hearing by a Disposing Officer. The submission of Claim and it’s disposal by the Disposing Officer through a hearing will happen together,” said Hajela.

The draft published on July 30, 2018 included the names of 2.9 crore people out of total applications of 3.29 crore. Forty lakh people were left out in the draft.

The NRC in Assam is being updated under the monitoring of the Supreme Court and the final list is scheduled to be released on July 31.