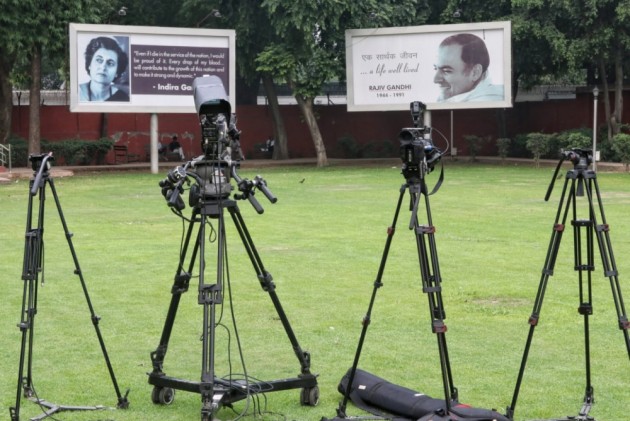 "I am too numb to react". As trends for the Lok Sabha polls began pouring in on Thursday morning, Congress leader and party's Jharkhand unit chief Ajoy Kumar couldn't believe the numbers flashing on the television screens.

Kumar arrived at the Congress office on 24, Akbar Road shortly past 10 am by when the counting trends had already shown the BJP-led NDA coalition ahead on 310 seats, proving correct pollsters who had predicted another landslide victory for Narendra Modi.

"It's déjà vu", said Rajeev Gowda, who as convenor of the Congress party's manifesto committee was involved in the party's game-changer, the NYAY scheme. Well, the game didn't change, at least not for the Congress. "Absolutely nothing we did seems to have worked. I just don't know what to say," Gowda told Outlook.

The trends foretell trouble for Congress president Rahul Gandhi who has not only steered his party to defeat once again but seems to be finding it difficult to retain his family pocket borough of Amethi too. Rahul has been trailing behind BJP's Smriti Irani in Amethi. The Congress president who had simultaneously contested from Kerala's Wayanad is, however, leading from the southern seat by over one lakh votes. But that is no consolation for him or his party. "It seems his constituents in Amethi have either rejected him or travelled to Wayanad to vote for him there," quipped a Congress leader.

With the leads showing a total rout for the Congress in MP, Rajasthan and Chhattisgarh, the three states where the party had won the assembly polls just 5 months ago, the drubbing was all the more worrisome. "I don't believe these results. Something clearly has gone wrong. We were very positive about winning at least 12 of the 29 seats in MP and sweeping Chhattisgarh. The trends suggest we are drawing a blank in both states," Congress spokesperson and former MLA from MP, Mukesh Nayak told Outlook. In MP, the clean sweep for the BJP is even more worrisome for the Congress since the party's stalwarts, chief minister Kamal Nath and Jyotiraditya Scindia, who had defeated the Modi wave of 2014 to retain their bastions of Chhindwara and Guna respectively seemed to be crashing out this time.

The only good news for the Congress seems to be coming from Punjab, Kerala and Tamil Nadu where the party (and its alliance with the DMK in Tamil Nadu) seems to be doing well.

In nearly a dozen states the party is yet to open its account. "If these trends convert into results, we are finished. There will be nothing left to build on by the time the 2024 polls come," a senior party spokesperson told Outlook.