National Not Necessary For Such Visits To Come Through Official Channels: Govt On EU MPs J&K Tour

Not Necessary For Such Visits To Come Through Official Channels: Govt On EU MPs J&K Tour

In a press conference, Ravish Kumar said the MEPs had expressed a 'keen desire' to know the country, adding it was like a 'familiarisation visit'. 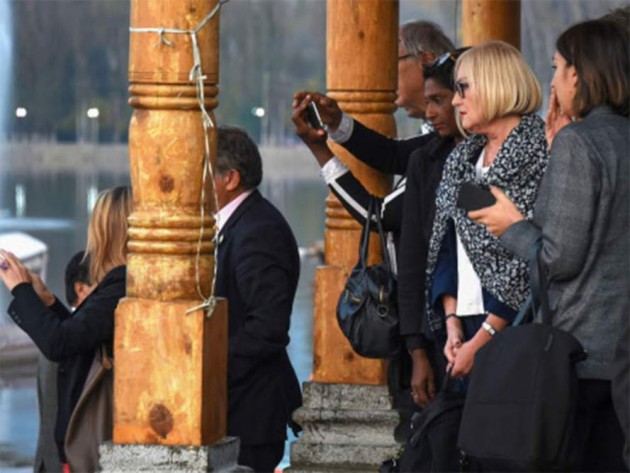 The Ministry of External Affairs (MEA) on Thursday said it was brought to government's notice that a delegation of members of the European Union Parliament (MEPs) was going to visit India, a day after questions were raised on an NGO and its head Madi Sharma who had invited the MEPs to meet Prime Minsiter Narendra Modi.

In a press conference, Ravish Kumar said the MEPs had expressed a "keen desire" to know the country, adding it was like a "familiarisation visit".

Besides NGO head Madi Sharma, the Opposition has also questioned political backgrounds of these leaders who visited the Valley on Tuesday amid shutdown, clashes and killings of 6 non-local labourers in Kulgam district.

Kumar said: "They (MEPs) belonged to a spectrum of views from different countries of Europe and different political parties. Meetings were therefore accordingly facilitated as has been done on many previous occasions."

Such delegations do not necessarily have to come through official channels, he added.

Kumar said  the visit shouldn't be seen as "internationalisation of Kashmir" issue.

The Congress had dubbed the entire tour a "diplomatic blunder", and asked the Centre why it was "internationalising" the Kashmir issue when it was an internal matter.

"Farmers and unemployed youth of India don't have the facility of meeting the prime minister so that their problems can be heard. But yes, international business brokers like Madi Sharma can proudly write, 'come to India we will also bear your expenses'."

In the invite that Sharma sent out to EU MPs, she wrote: “I am organising a prestigious VIP meeting with the Prime Minister of India, His Excellency Narendra Modi and it is my privilege to offer this invitation to you.”

Congress chief spokesperson Randeep Surjewala, too, asked who Madi Sharma was, adding in what capacity was she fixing the appointment of MEPs with the prime minister and why the Government of India was facilitating it.