Schools are being reopened at a time when the state is seeing a significant decline in coronavirus cases. Madhya Pradesh on Friday reported 11 infections and no casualties. 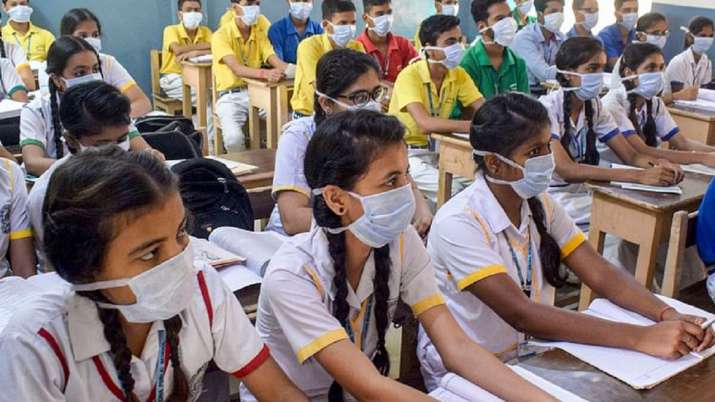 The Madhya Pradesh government on Saturday released a standard operating procedure (SOP) for reopening of schools for Classes 11 and 12 with 50 per cent attendance. The schools are scheduled to open on July 26, said an official.

According to his statement,  the SOP released on Friday recommended physical classes for students of Classes 9 and 10 standard to take place once a week from August 5.

Classes will be held twice a week for students of Classes 11 and 12, and virtual sessions will continue simultaneously, he said.

Class 11 students will attend school on Tuesdays and Fridays, while Class 12 students will convene at schools on Mondays and Thursdays, he said.

Students of Classes 9 will attend school on Saturdays and for those in Class 10, sessions will be held on Wednesdays, the official added.

According to the guidelines, student gatherings such as morning assemblies and swimming lessons are not permitted to prevent the viral spread.

Apart from this, the state government has asked schools to undertake a slew of measures such as running COVID-19 tests on students and teachers.

Schools are being reopened at a time when the state is seeing a significant decline in coronavirus cases. Madhya Pradesh on Friday reported 11 infections and no casualties.
Meanwhile, chief secretary Iqbal Singh Bains has directed district collectors and chief medical and health officers to inoculate teachers and non-teaching staff of schools and colleges that come under the Department of Higher Education and School Education from July 26 to 31, the official said.

For this, a vaccination campaign will be organised from 9 am to 5 pm on an appointed date by selecting colleges with facilities in the district headquarters and development blocks, he added.

It will be ensured that the first and second dose of jabs against COVID-19 are administered to teachers and employees of all government and non-government colleges and schools, including those of the Tribal Welfare Department, the official said.