The prime minister has stolen from the people from Andhra Pradesh and he has given that money to Anil Ambani, Rahul Gandhi said at Andhra Bhavan. 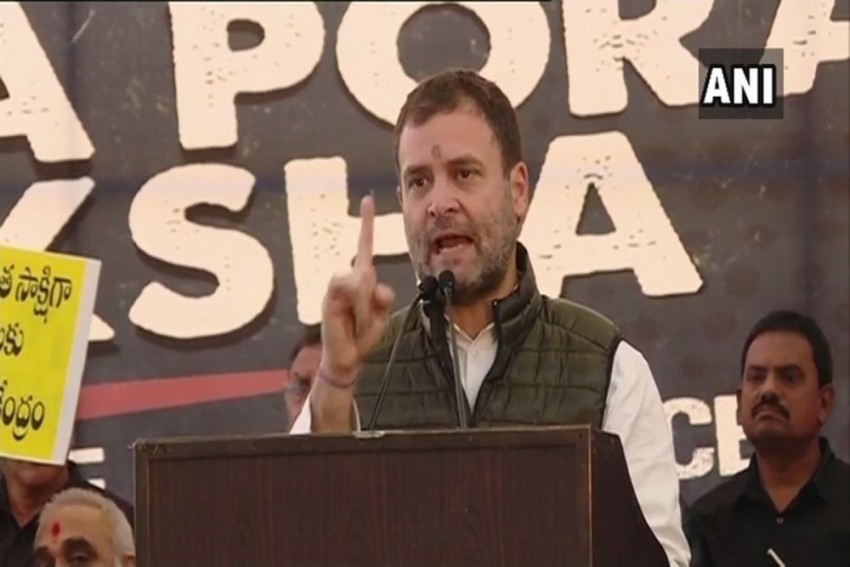 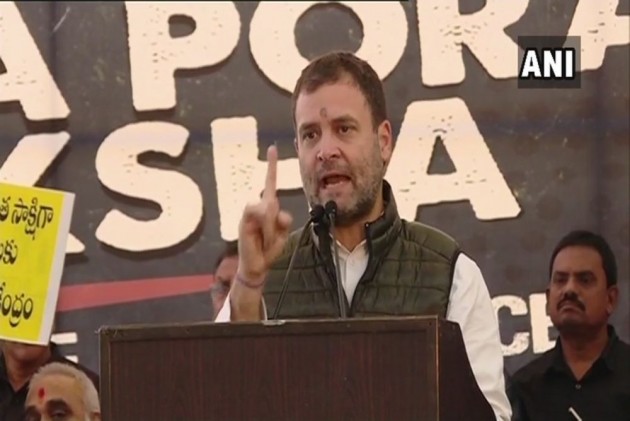 "I stand with the people of Andhra Pradesh. What kind of a Prime Minister is he?" Gandhi said addressing the people at a 12-hour-long fast by Andhra Chief Minister N. Chandrababu Naidu.

Naidu sat on the fast earlier in the day demanding the Centre to accord the SCS and fulfil other commitments made in the Andhra Pradesh Reorganisation Act, 2014.

Stepping up attack on the Prime Minister, the Congress leader said: "He (Modi) did not fulfil the commitment made to the people of Andhra. Modi tells a lie wherever he goes.

"He goes to the northeast tells lies; goes to Maharastra and lies -- He has absolutely no credibility left."

Gandhi asserted that the Prime Minister has only months left in office as the opposition was going to show him the sentiment of the people.

"Remember one thing he has few months left, one or two months, the opposition parties are going to show Modi exactly what the nation's sentiment is," he added.

"The prime minister has stolen from the people from Andhra Pradesh and he has given that money to Anil Ambani. That is the fact of the matter," Gandhi said at Andhra Bhavan in an apparent reference to the Rafale fighter jet deal with France.

The government and Ambani have rejected Gandhi's allegations of corruption in the deal.

In just a couple of months, opposition parties will show Modi exactly what the sentiment in the country is, he said.

"I want to let you know that we are all standing together. We are going to defeat the BJP...," he added.

Gandhi also referred to a report in The Hindu, claiming that critical provisions for anti-corruption penalties and making payments through an escrow account were dropped days before the signing of the inter-governmental agreement (IGA) between India and France in 2016 on Rs 59,000 crore Rafale deal.

The report, he said, clearly shows that the anti-corruption clause was removed by Narendra Modi.

"So it is clear that prime minister has stolen in this Rafale matter," he alleged.

Naidu, who began a day-long fast at the Andhra Bhavan demanding that the Centre fulfil all promises made during AP's bifurcation in 2014, warned that Modi would be given a befitting answer if he made personal attacks against the people of his state.

He alleged the central government did a grave injustice to Andhra and it would have "repercussions on national unity".

"On behalf of five crore people, I'm warning this government... I came here to remind you of the promises made in the AP Reorganisation Act," Naidu said.