Mamata Rally: Modi, Shah Leave Farmers At Mercy Of Insurance Cos, Says Kejriwal; Who Says What 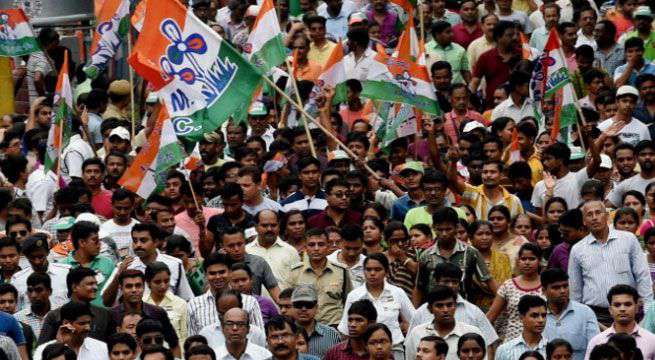 "Lots of powers have tried to weaken India. It was Pakistan's dream to divide India for so many years. What Pakistan couldn't manage to do, Modi and Amit Shah did in 5 years," he added.

Former Uttar Pradesh chief minister Akhilesh Yadav said people's rights were under the threat as he attacked the Centre for curtailing people's rights. He said the 2019 Lok Sabha elections would see a fight between the alliance of the BJP, CBI and ED on one hand and the Mahagathbandhan on the other. Earlier, former J&K chief minister Farooq Abdullah called Electronic Voting Machines (EVM) 'chor' machines and said opposition leaders must urge the poll panel to do away with them. Earlier, ex-BJP leader and former finance minister Yashwant Sinha urged opposition parties to make the country’s “failing economy” as the election issue in upcoming Lok Sabha polls.

He praised West Bengal chief minister and TMC president Mamata Banerjee and termed her efforts to make way for a secular government in the country as "historic".

"Mamata is a great leader. She is hard working and such people are required in politics," Gowda said.

Earlier, Congress president Rahul Gandhi extended his support to Mamata Banerjee on Friday for her “show of unity” in Kolkata on January 19 and hoped that it would send a powerful message of a united India.

In a letter to Banerjee, the Congress chief commended the “great people” of Bengal, who had “historically been at the forefront of defending our ideals”.

“I extend my support to Mamata Di on this show of unity and hope that we send a powerful message of a united India together,” Gandhi wrote in the letter.

In a Facebook post, he said, “The entire opposition is united in our belief that true nationalism and development can only be defended on the tested pillars of democracy, social justice and secularism, ideas that the BJP and Mr Modi are intent on destroying.”

The mega rally organised by the TMC is being seen as a first step towards the formation of a coalition against the BJP ahead of the 2019 Lok Sabha polls.