Polling for 90 seats of Haryana and 288 constituencies of Maharashtra has begun on Monday at 7 am and will continue till 6 pm in the evening. 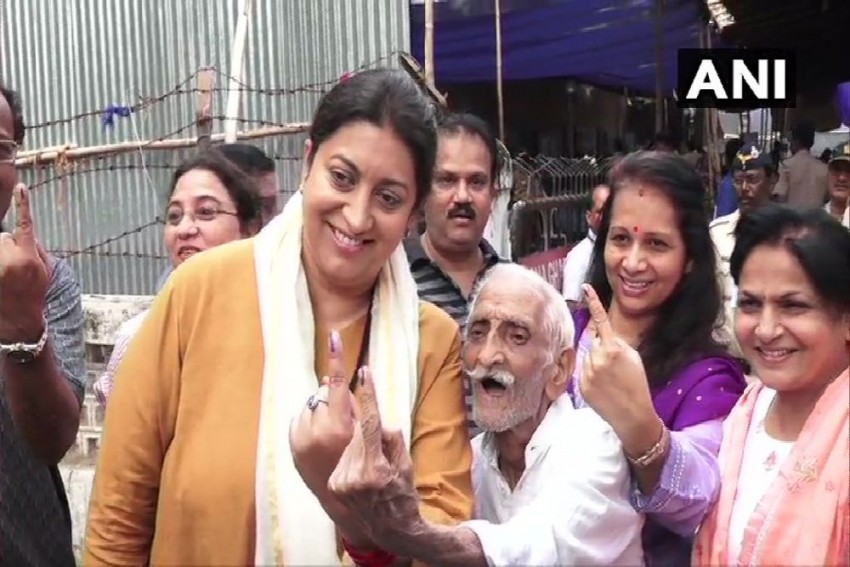 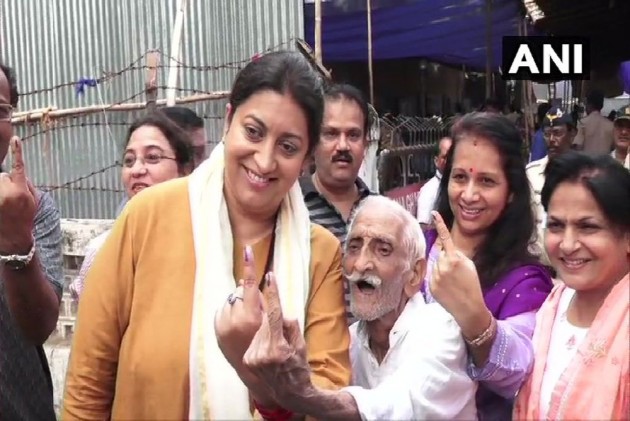 The states of Haryana and Maharashtra have begun the polling process for the Assembly Elections 2019 on Monday.

In Haryana, 19,578 polling stations have been set up whereas there are 96,661 polling booths in Maharashtra for citizens to cast their votes.

6:40 PM: Haryana recorded 62% turnout at the close of polling for the assembly elections, while Maharashtra recorded a 63% voting, similar to 2014.

6:01PM: Voting for the Maharashtra and Haryana assembly concluded at 6 PM. The states recorded a slow voter turnout.

3:43 PM:  Union Minister Prakash Javadekar on Monday said he was confident that the BJP-Shiv Sena alliance in Maharashtra will break all previous records by winning more than 222 seats.

Speaking to ANI, Javadekar said, "Not just 220, we will cross 222 seats this time in Maharashtra. The Congress had won 222 seats once but we are going to break this record and form an even stronger government this time."

2:40PM:  A woman was injured as clash took place between two groups outside a polling booth in Malaaka village in Nuh district in Haryana's Mewat region on Monday, a senior police official told PTI.

2:18 PM: Former India batsman Sachin Tendulkar, his wife Anjali and son Arjun, cast their votes in Bandra (West) on Monday afternoon. The master blaster urged young people to come out of their homes and cast their votes.

1:30 PM: By 1 PM, Haryana witnesses polling percentage of a little over 35 per cent while Maharashtra recorded 27.47 per cent.

"Today's hero is Khanna Ji ( old man standing next to her). He had served in the Army. He is 93 and came out to vote. It is an inspiration and I request people to come out and vote if at 93 he can vote, who is stopping you?" she said.

12: 30 PM: Union Minister and  BJP leader Dharmendra Pradhan said, "BJP is going to form govt in both the states, Haryana and Maharashtra. We are confident that people will continue to support Prime Minister Modi, his philosophy and his policies."

#WATCH Nationalist Congress Party Chief Sharad Pawar after casting his vote in Mumbai: I request everyone to come out and vote in large numbers, this is a celebration of democracy. #MaharashtraAssemblyPolls pic.twitter.com/V920UfLZr9

12:01 PM: According to the Election Commission of India, Haryana recorded 23.11 per cent voter turnout while Maharashtra saw poll percentage of 16.28 till noon.

11:20 AM:  Voter turnout in the ongoing Assembly elections has been a poor show till about 10:00 AM in the morning. Maharashtra saw 5.8% voter turnout whereas Haryana had 8.9% voter turnout.

11: 15 AM:  A scuffle and stone pelting between supporters of the Congress and the BJP was reported from Muslim-dominated Nuh district in Mewat town around 8.45 a.m. on Monday while voting was in full swing for Haryana Assembly elections, an official said.

11:00 AM: In Maharashtra elections, various Bollywood celebrities came to cast their votes.

10:50 AM: Haryana CM ML Khattar casts his vote in Karnal.

"Voting is underway peacefully across the state. Opposition parties including Congress have already lost and have left the battleground, their tall claims have no value," Khattar said.

10:45 AM: Maharashtra Chief Minister Devendra Fadnavis along with family casts his vote in a polling booth in Nagpur.

10:25 AM: Former tennis player Mahesh Bhupati, wife and actor Lara Dutta after casting their vote at a polling booth in Bandra (West). 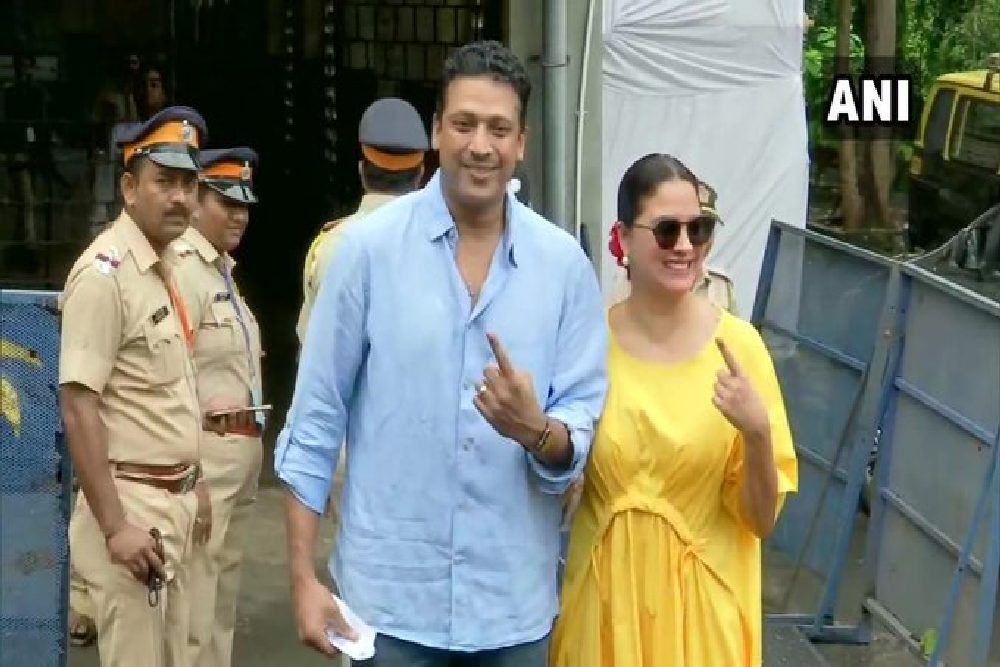 10:20 AM: Actor Aamir Khan arrives to cast his vote at a polling booth in Bandra (West), says 'I appeal to all citizens of Maharashtra to come out and vote in large numbers'. 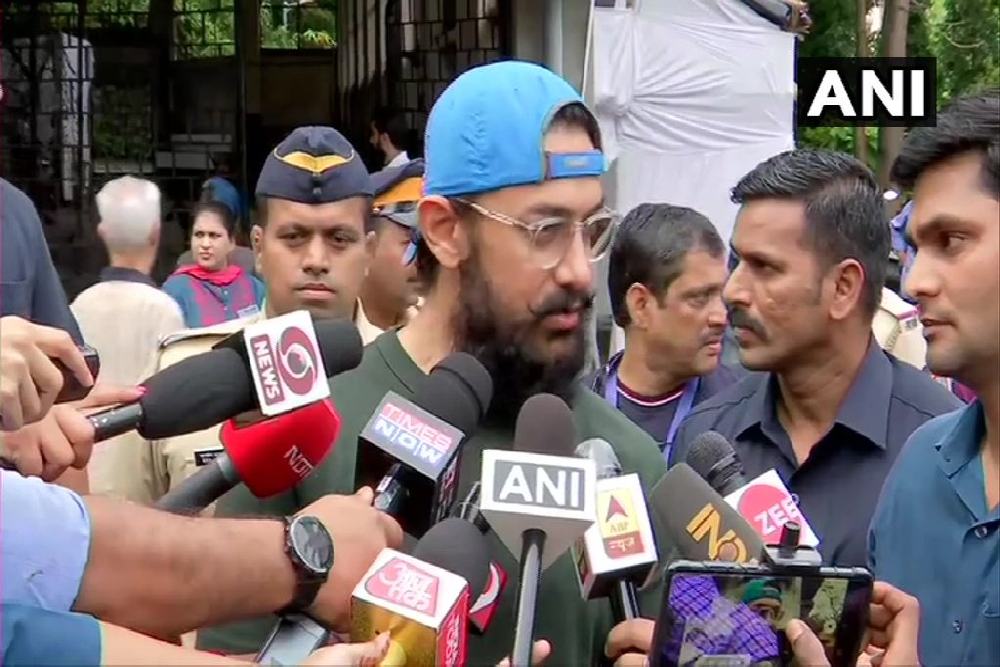 9:56 AM: The Sakhi Matdaan Kendra, a gaily-decorated polling station in Washim managed by an all-women staff, including security, was seen drawing hordes of voters as polling started for the Maharashtra Assembly elections on Monday.

An EC official told IANS: "The public response to the special all-women polling station is very positive" and they would try to replicate it in other parts of the state in future.

9:46 AM: On the polling day in Maharashtra Assembly Elections 2019, Union Minister Piyush Goyal, "BJP-Shiv Sena alliance in Maharashtra will win around 225 seats."

I urge everyone to participate in Maharashtra & Haryana assembly elections & the by-polls in various parts of India. This is a great opportunity to vote for a strong & development focused Govt #BigWinForBJP pic.twitter.com/Oo5t4FankZ

9:45 AM: Specially-abled husband and wife leave after casting their vote at a polling booth in Juhu, Mumbai

9:05 AM:  TikTok star Sonali Phogat who is contesting on a BJP ticket from Adampur constituency, after casting her vote. She is up against senior Congress leader Kuldeep Bishnoi 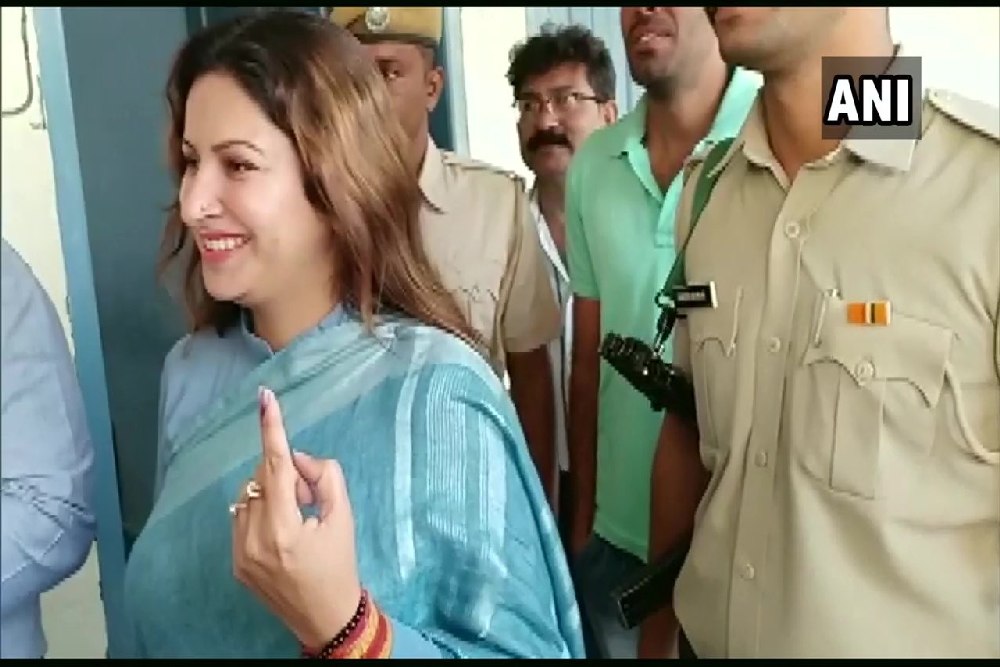 9:00 AM:   Senior Nationalist Congress Party(NCP) leader Praful Patel & his wife Varsha cast their votes at a polling booth in Gondia assembly constituency. Gopal Agarwal from BJP & Amar Varade from Congress is contesting from this constituency. 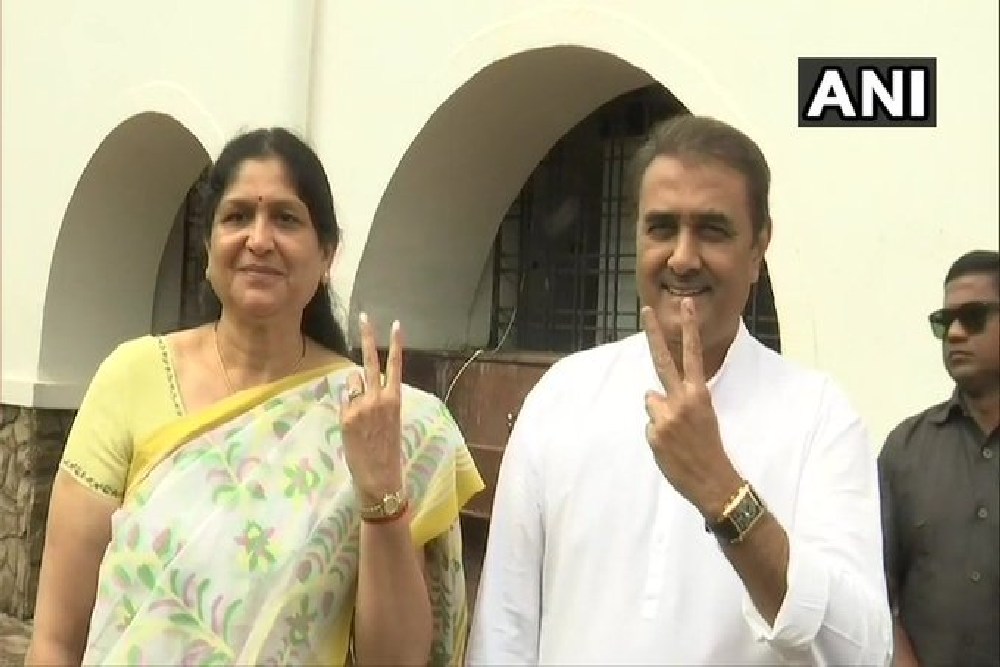 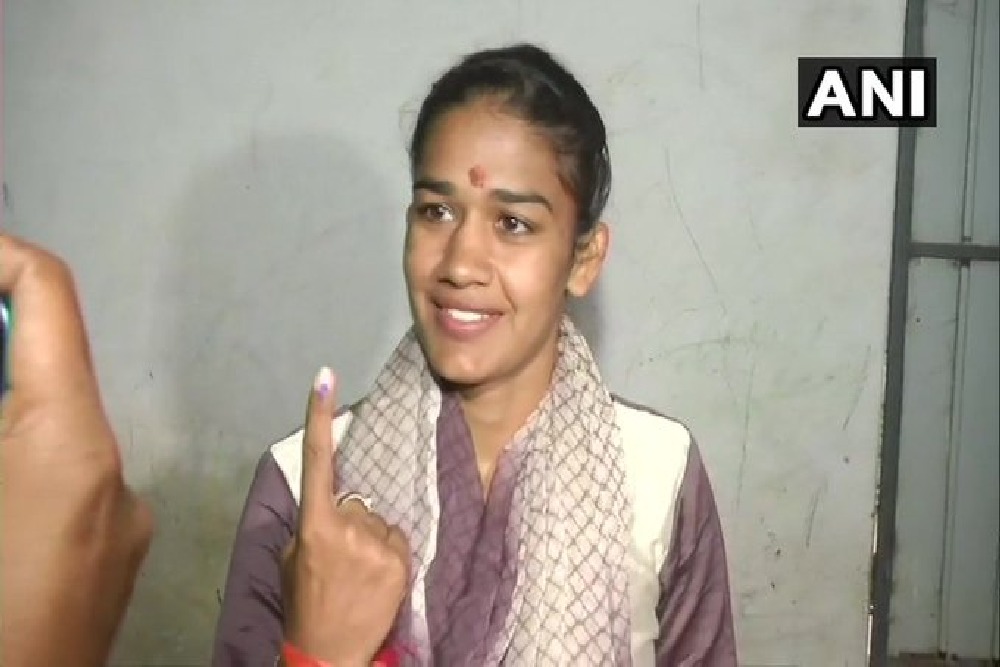 8:58 AM: Yogeshwar Dutt, Olympic Medallist & BJP candidate from Baroda casts his vote. He is contesting against Congress candidate Krishan Hooda.

8:45 AM:  Senior Nationalist Congress Party (NCP)leader and candidate from Baramati, Ajit Pawar after casting his vote, he is contesting against BJP's Gopichand Padalkar.

8:40 AM: Union Minister Nitin Gadkari and wife Kanchan, after casting their vote in Nagpur. 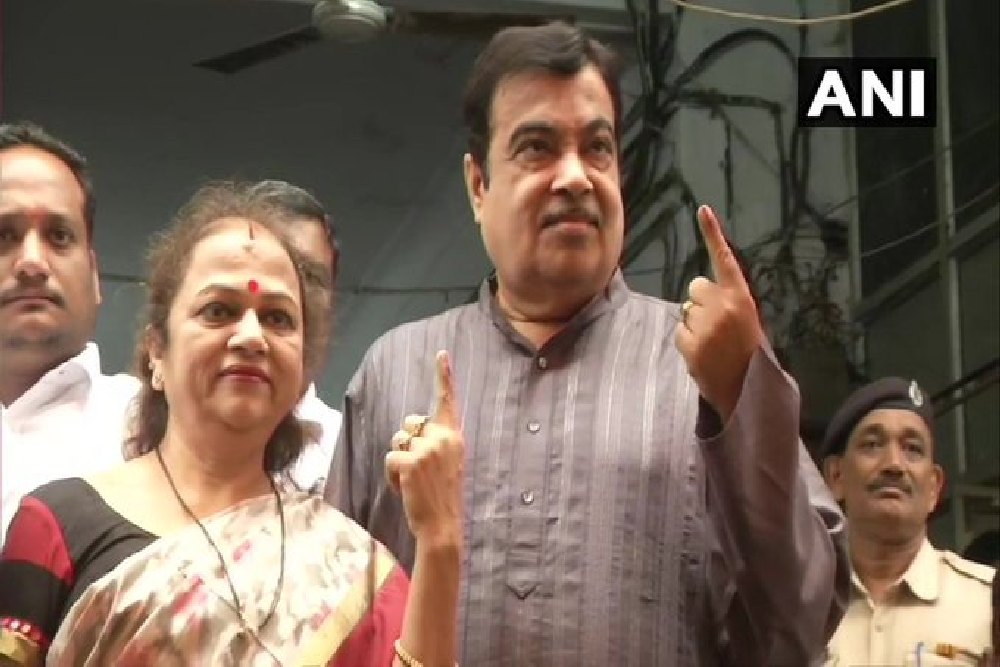 8:00 AM: Prime Minister Narendra Modi on Monday urged voters in Maharashtra and Haryana to go out an vote in record numbers.

"Elections are taking place for Haryana and Maharashtra assemblies. There are also by-polls taking place in various parts of India. I urge voters in these states and seats to turnout in record numbers and enrich the festival of democracy. I hope youngsters vote in large numbers,"the prime minister wrote on Twitter.

7:55 AM: Mohan Bhagwat, RSS Sarsanghchalak after casting his vote for the Nagpur Central constituency 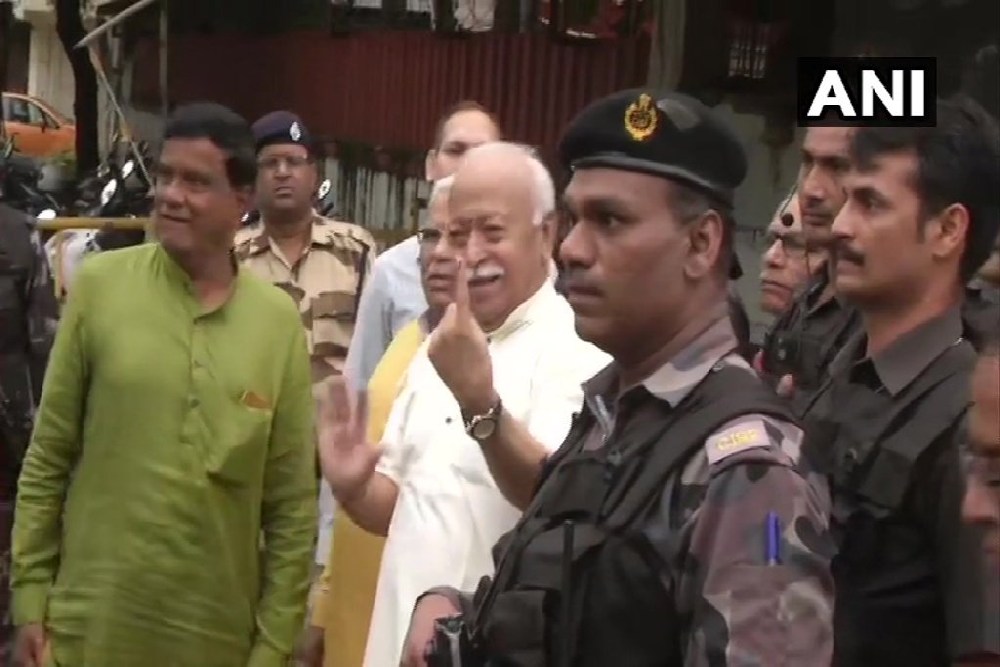 6:44 AM: Preparation underway at booth number 283-284 ahead of polling for the Bandra West assembly constituency. Ashish Shelar from BJP and Asif Zakaria from Congress are contesting from this constituency. 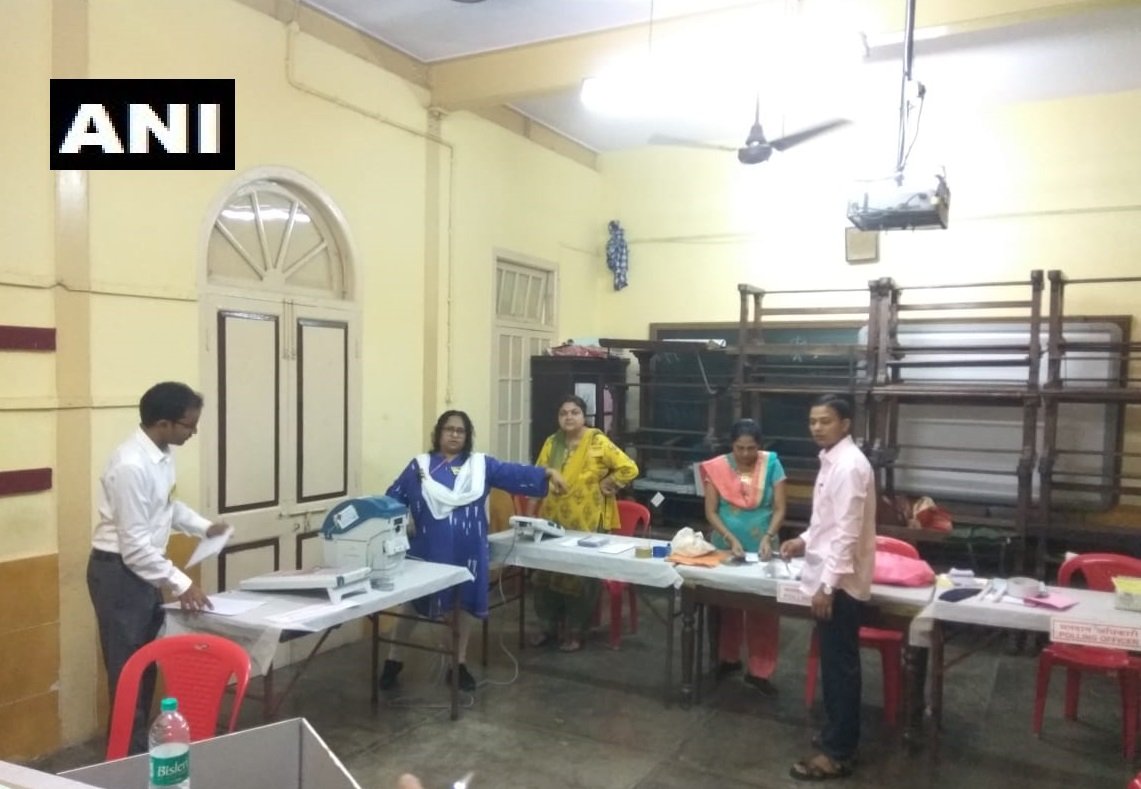 6:45 AM:  Preparation underway at booth number 244-250 ahead of polling for the Malabar Hill assembly constituency. Mangal Prabhat Lodha for BJP and Heera Devasi for Congress are contesting from this constituency. 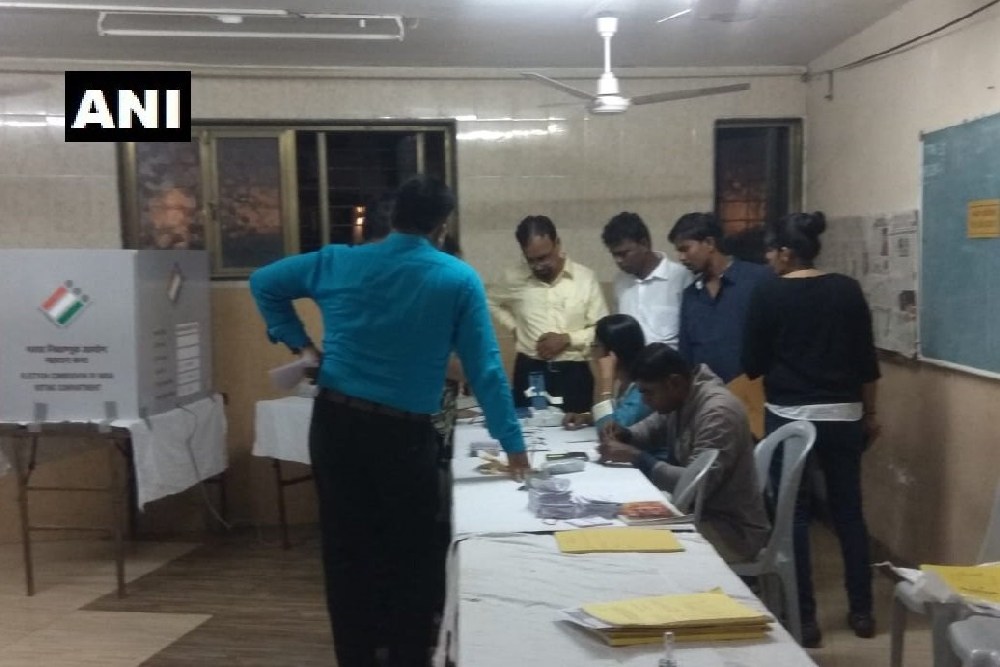