Labourers Might Be Trapped In Another Tunnel: Uttarakhand Govt After 3 Days Of Rescue Operations

Three days after the rescue operations in the Tapovan area, NTPC authorities said the labourers were trapped in another silt filtration tunnel located 12 metres below Intake Adit. 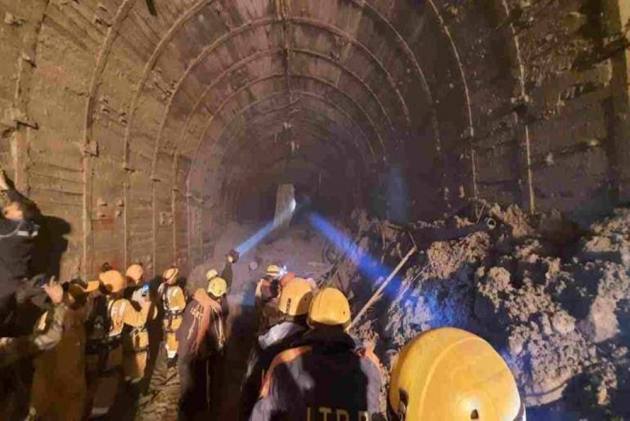 Rescue operations are still underway in Uttarakhand's Chamoli district where flash floods in the Alaknanda river system caused widespread destruction on Sunday. A total of 32 bodies have been recovered while authorities put the official figure of missing persons at 197.

Now three days after the rescue operations in the Tapovan area, NTPC authorities said the labourers were trapped in another silt filtration tunnel located 12 metres below Intake Adit.

During a meeting on Wednesday, the Uttarakhand government authorities directed NTPC officials to share “correct” information, and send expert engineers of the tunnel to the site to assist in the rescue operations, The Indian Express reported.

Garhwal Commissioner Ravinath Raman said, “Earlier, we were told about the probability of about 34 labourers present 180 metres inside the Intake Adit tunnel, and we were digging in that direction. Today, they (NTPC authorities) informed us that the last known worksite of the labourers is a silt filtration tunnel (SFT) 12 metres below the Intake Adit Tunnel and about 72 metres from its opening. With this, the strategy of going up to 180 metres has been changed. Drilling will be done in the SFT and lights with cameras will be lowered into the area.”

“The tunnel has become unstable at places due to slush. So we want expert experienced engineers to guide the rescue operation,” Raman told The Indian Express.