Congress and JD(S) workers protested in front of their party offices, urging the MLAs to withdraw the resignation. 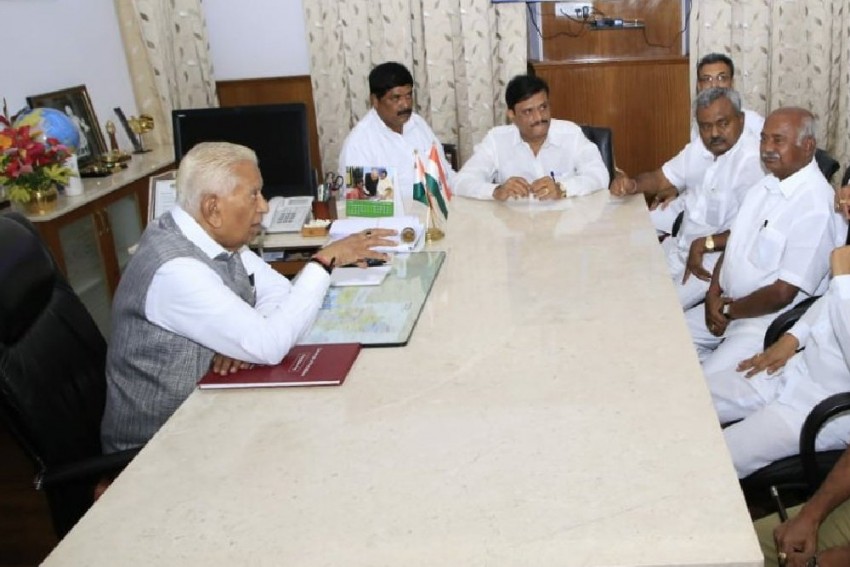 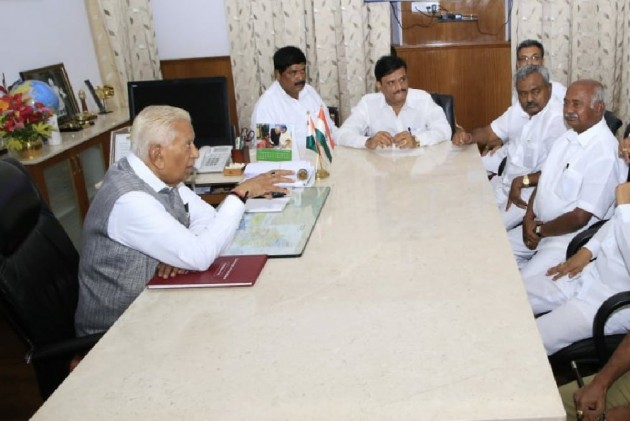 Even as Karnataka Chief Minister H D Kumaraswamy went into a huddle with the coalition leaders RPT coalition leaders in a last-ditch attempt to save his 13-month-old alliance government, hit by resignations of over a dozen Congress-JD(S) MLAs, disgruntled MLAs camped in Mumbai Sunday made it clear they will not withdraw.

A day after the resignation of MLAs rocked the coalition and plunged the state into a political crisis, leaders of both parties held day-long discussions about the next course of action to save the government.

This comes even as opposition BJP said it is keeping a watch on the ongoing developments and indicated that the party was looking at options to form the government.

The Congress-JD(S) government has plunged into a crisis, with 13 MLAs of the alliance submitting their resignations to the Speaker so far, 12 of them on Saturday.

Nine Congress MLAs and three of JD(S) went to the Speaker's office to put in their papers Saturday and later met Governor Vajubhai Vala at Raj Bhavan. Another Congress MLA, Anand Singh, submitted his resignation on July 1.

The ruling coalition, which has 118 MLAs in the 224 member assembly, faces the risk of losing its majority if the resignations are accepted.

Ten out of total 13 MLAs who have resigned are now camping at a hotel in Mumbai. "We are 10 MLAs are here, totally 13 MLAs had submitted resignation to Speaker and informed the Governor.

Congress leaders protest outside the hotel there, accusing the BJP of luring away legislators of other parties. Rocked by resignations of 10 of its MLAs, CLP leader Siddaramaiah has convened a meeting Tuesday to discuss the developments and the assembly session, starting from July 12.

In an intimation to Congress MLAs, he has warned that their absence would be viewed "seriously".

The meeting gains significance amid reports that more legislators are likely to resign in the next couple of days. To a question about attending the CLP meeting, Somashekar said there was no question of them doing so as they had already submitted their resignations.

Asked whether they would withdraw their resignations if the CM is changed, he said "we have not asked for a change in CM, nor for someone else to be made CM."

There were reports of a change of guard as an option to save the government by making veteran Congress leader Mallikarjun Kharge the Chief Minister.

Kharge ruled it out, saying "false" and "flimsy" news was being spread through the media just to divide the party. "I don't know about it. I want this alliance government to continue and go smoothly," he said, adding he would also talk to the MLAs to withdraw their resignations

He charged the BJP with trying to destabilize the "non BJP" elected governments across the country. There were also reports that Siddaramaiah may be considered for Chief Minister if JD(S) agrees, to which JD(S) leader and Minister G T Devegowda said "If the coordination committee decides Siddaramaiah should be the CM, we have no objection.. so be it."

Kumaraswamy, who arrived in Karnataka this evening from the U.S., drove straight to a hotel where a JD(S) MLAs meet is on.

Sources said he asked the MLAs to stay united against BJP's "operation" and about ways to save the government. He later held discussions with Congress leaders, including AICC General Secretary Venugopal and Siddaramaiah, they said.

All options, including a cabinet reshuffle to make way for disgruntled MLAs, by asking some loyalists of both parties to resign from the Ministry, are likely to be discussed during Congress leaders' meeting with the CM, sources had said.

Congress leaders, including Venugopal who have camped in Bengaluru, held a series of meetings Sunday to strategise the plan of action in a last ditch effort to save the government.

They also tried to reach out to MLAs who resigned and pacify them, sources said, adding efforts were also made to contact MLAs suspected to be "vulnerable" and who might resign in the days to come.

The Congress' high command has reportedly questioned state unit leaders about how they had allowed such a large number of resignations to happen, party sources said.

Meetings were also on in JD(S) circles, at the residence of party patriarch Deve Gowda.
Shivakumar, considered the Congress' troubleshooter also met Gowda at his home and and discussed the developments.

Stating that attempts are on pacify the MLAs, Siddaramaiah earlier in the day alleged that BJP was behind it, using power and money as allurements to lure the disgruntled MLAs.
BJP state unit chief B S Yeddyurappa said the party was watching the developments and that they were not "sanyasis" to rule out the possibility of forming the government.

Ruling out the possibility of any mid-term polls, he said "it has been just 13 months after the assembly election. We will not allow election to happen.

"Let them (Congress-JDS) give good administration.If they can't, we are there with strength of 105 MLAs...we will not meet the Governor or go to Delhi for now. we are watching the
developments," he added.

The JD(S)-Congress coalition's total strength, including those who have put in their papers, is 118 (Congress-78, JD(S)-37, BSP-1 and Independents-2), besides the Speaker.
BJP has 105 MLAs in the House, where the half-way mark is 113. If the resignations are accepted, the coalition's tally will reduce to 105. The Speaker also has a vote.

Meanwhile, Congress and JD(S) workers protested in front of their party offices, urging the MLAs to withdraw the resignation.

In Mumbai Congress leaders protest outside a hotel, accusing the BJP of luring away legislators of other parties.