Among the 19 Congress MLAs, who skipped the crucial CLP meet on Monday, three are ministers in Ashok Gehlot’s cabinet. All the ministers are said to be close to Sachin Pilot whose rebellion has triggered a political crisis in Rajasthan. 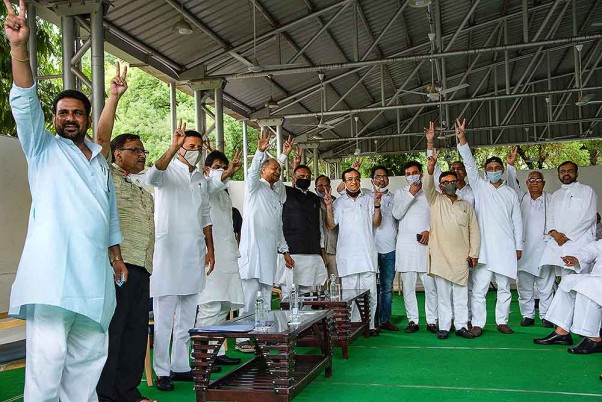 When more than 100 Congress MLAs turned up at Rajasthan Chief Minister Ashok Gehlot’s residence for the crucial Congress Legislature Party meet on Monday and to flaunt the strength of his government, there were 19 Congress MLAs -- loyal to disgruntled Sachin Pilot -- including three cabinet ministers who did not show up.

According to an MLA who is close to Deputy CM Pilot, around 19 MLAs including some independent MLAs did not turn up at the CLP meeting. "We are supporting our leader Sachin Pilot. We have full confidence in him," said a senior Congress MLA and Pilot confidante. On Sunday night, Pilot's media manager had claimed that he had the support of 30 MLAs and that the Gehlot-led government was in minority.

Known to be the loyalist of Sachin Pilot, the cabinet minister and erstwhile royal from Bharatpur Vishvendra Singh, who skipped the CLP meeting, was the first one to extend his support to the deputy CM publicly. Singh, who holds the portfolio of Tourism, tweeted, "Whatever my decision, it will be in the interest of the people who have elected me". Following his tweet, he posted another one with a collage of Sachin Pilot's photographs showing him struggle during the last six years in Rajasthan. The other two cabinet ministers who skipped the meet include Ramesh Meena, MLA from Sapotra in Karauli district, who holds the portfolio of Food and Civil supplies and Consumer Affairs, and Social Justice Minister Bhawarlal Meghwal, who is currently hospitalised.

Among other prominent leaders who skipped the CLP meet in to extend support to Pilot include Harish Meena, former DGP Rajasthan and MLA from Uniara in Tonk district, Dipendra Singh Shekhawat, former assembly speaker and MLA from Srimadhopur in Sikar district, Brijendra Ola, MLA from Jhunhjunu, Mukesh Bhakar, MLA from Ladnu in Nagaur district and Bhawar Lal Sharma from Churu.

Moreover, three independent MLAs who did not turn up in the CLP meeting include Suresh Tank, Kushveer Singh and Om Prakash Hudla. All three were removed as associated members of the Congress party after Anti Corruption Bureau had sought preliminary enquiry from them pertaining to the charges of toppling the government as mentioned in the FIR lodged by Special Operation Group (SOG) of Rajasthan Police on Friday.

Back To Resort Politics

The CLP meeting that went on for one hour passed the motion condemning all undemocratic activities to weaken the Congress government in the state. According to the motion, “BJP 's conspiracy of insulting democracy will not be agreeable to the eight crore population of Rajasthan.” It was decided that action will be taken against those Congress leaders involved in the “anti-party activity”. Senior Congress leader and spokesperson, Randeep Singh Surjewala, Rajasthan Congress in-charge, Avinash Pandey and Congress leader Ajay Maken were also present in the CLP meeting.

In the house of 200 MLAs in the State Assembly, the Congress has 107 MLAs -- six of them are from Mayawati's Bahujan Samaj Party and changed camp last year. It also has the support of at least a dozen independent MLAs. Whereas, BJP has 72 of its own MLAs and the support of six others.