Amid the communal riots that broke out in northeast Delhi, Savitri's Muslim neighbours ensured she does not feel unsafe or threatened. 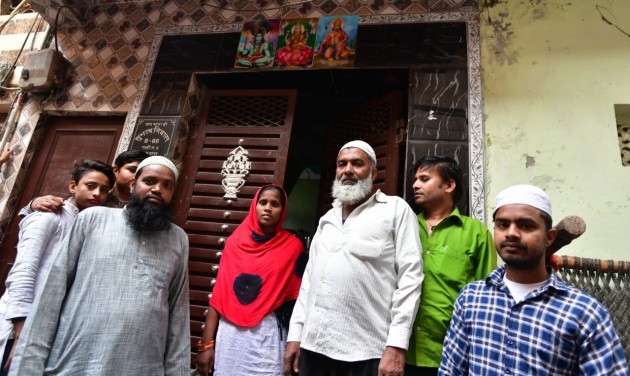 Thirty-year-old Savitri stays in northeast Delhi’s Babu Nagar area with her two kids and brother-in-law. She has been living there for more than 10 years.

Her husband passed away a few years ago and her brother-in-law takes care of the family’s financial needs.

On February 24, when reports of communal violence emerged from the neighbouring Shiv Vihar and Chand Bagh, Savitri, worried about her family’s safety, decided to go to her relatives’ place in other parts of Delhi.

Who Fanned The Flames of Hatred? Is Kapil Mishra Only To Blame?

There are around 2,000 houses in the area where she stays and Hindu families own only 50 houses, that too are scattered all over. Others are owned by Muslims.

Also Read |  Delhi Riots: 'The Bullet That Hit Me Didn’t Have Any Religion'

The 60 odd houses in the street, where Savitri lives, house Muslim families.

In that tense atmosphere, she was afraid when she saw hundreds of Muslim families from Shiv Vihar moving to Babu Nagar to take shelter at homes of their relatives. But her fears were allayed after her neighbours promised to take care of her family.

“I had some concerns initially but before I could prepare to leave, my neighbours sensed it all. They came and asked about my well-being. When I asked them if I should leave, they got upset and told me that they would not let that happen,” Savitri said.

“They told me that if they have to risk their own well-being, they would do that but would not let anything happen to me and my kids,” she said.

Also Read: A Walk Through Scarred Lanes Of Delhi In The Aftermath Of A Riot

Savitri’s neighbour, Asif Mirza, says he told everyone in their colony to take care of Savitri and her family.

The elders in the colony said they would not let even other Hindu families leave.

“'If you go, it will hurt us,' I told them,” said Asif adding that those who caused violence and bloodbath were neither Hindus nor Muslims.

“They were enemies of humanity. They don’t have any religion.”