The 2010 UPSC topper is likely to contest polls from the parliamentary seat of north Kashmir. 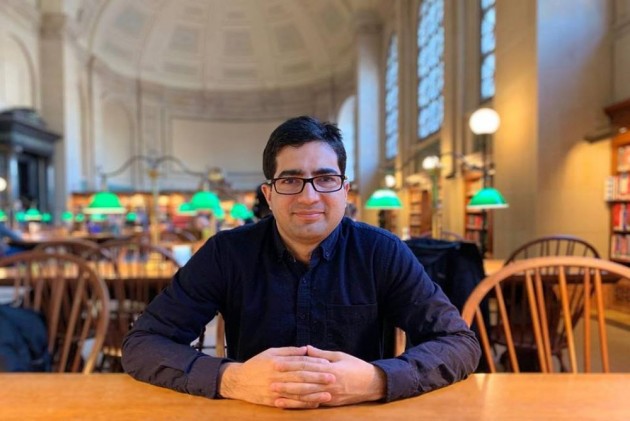 Kashmiri IAS officer Shah Faesal, a 2010 UPSC topper, has resigned from the services to join politics.

Faesal is likely to join the National Conference and contest polls from the parliamentary seat of north Kashmir.

In a post on Facebok, Faesal said he has decided to resign from the IAS to "protest against the unabated killings in Kashmir, and lack of any sincere reach-out from the Union Government; the marginalization and invisiblization of around 200 million Indian Muslims at the hands of Hindutva forces reducing them to second-class citizens; insidious attacks on the special identity of the J&K State and growing culture of intolerance and hate in the mainland India in the name of hypernationalism."

He said he will address a press conference on Friday to share his future plans.

Welcoming him to the "fold of politicians", former J&K Chief Minister Omar Abdullah said, "The bureaucracy’s loss is politics’ gain."

The bureaucracy’s loss is politics’ gain. Welcome to the fold @shahfaesal. https://t.co/955C4m5T6V

Faesal, who is also the recipient of the 2018 Fulbright-Nehru Master's Fellowship at Harvard Kennedy School, returned from Harvard last week.

Last week, Faesal and another Kashmiri writer Mehboob Makhdoomi wrote an article in the Indian Express arguing to discuss new approaches to dispute resolution. The article evoked a response from various sections and also a long counter article in an English weekly Kashmir Life, which Faesal shared on Facebook.

Later in his Facebook post he wrote: “Looking at the reactions to our joint IE article, I feel that our friends in Kashmir are not in a position to even discuss new approaches to dispute resolution not to speak of trusting their leaders with trying them. (I don't count myself as a leader here).”

“Sad part here is that Kashmir is in a full-blown crisis but perhaps the time is not ripe yet to do new experiments and accept new people. There is enough of blood but there is not enough of trust,” Faesal wrote.

Last year,Faesal found himself in trouble when the government sent a notice to him for his tweet on rapes in India.

Offended  by the tweet, the Department of Personnel and Training (DoPT) forwarded  a copy of communication along with enclosures in which several references were made to the IAS officer's tweets saying the tweets are "prima facie in contravention of the extent provision of the All India Service (Conduct Rules) 1968, All India Services (Discipline and Appeal) Rules, 1969."

The General Administration Department (GAD) of the J&K Government, following the communication from the DoPT, wrote the letter to the IAS officer. However, the notice didn’t stop Faesal from voicing his opinions through tweeting and writing.