Describing the Modi government, TMC's new RS candidate and former Prasar Bharati CEO Jawhar Sircar said that incompetence under the garb of autocracy is the hallmark of this government. 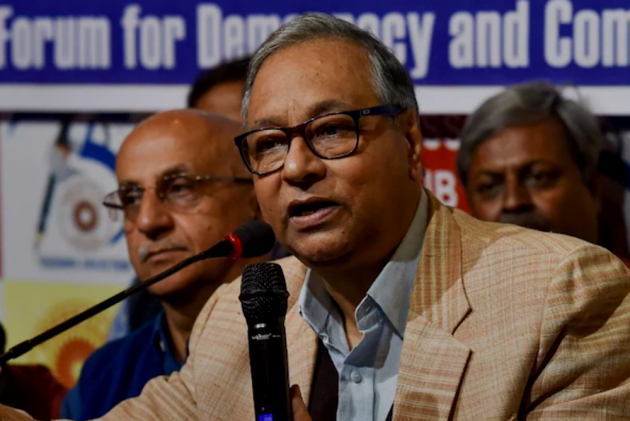 Jawhar Sircar is not just any other bureaucrat. While serving as India’s culture secretary, he had earned a special kind of respect from the arts and culture world for himself for being a scholar and history buff with a sound knowledge of culture and religion. Since resigning from the post of CEO of Prasar Bharati in 2016, Sircar has emerged as one of the most vocal critics of the Modi government. After Trinamool Congress chief Mamata Banerjee’s decision to nominate him to the Rajya Sabha came as a surprise move to the state’s political observers, Outlook's Snigdhendu Bhattacharya spoke to Sircar to find out more about his role and plans ahead.

Q. You have been a vocal critic of the Modi government and resigned from Prasar Bharati without completing your tenure. How do you see India changed since 2014?

I entered the civil service in 1975 straight from university politics. I was engaged in the politics of opposing the Emergency before I moved on to the other side of the barricade. I found it very interesting to be on both sides of the barricade in the period of a month. After a year of training, I came back to the district and the Emergency was still going on in full swing. I have seen how the Emergency operated, in most quarters, including the use of MISA, how detentions and snooping were done, etc. I also happened to know what the other side thought. It was a very interesting experience where you keep your opinions to yourself and watch the powers play it out. After that, came the elections in 1977. Since then, I think I have worked with a total of 17 ministers, including a Prime Minister (Manmohan Singh) who held the culture portfolio. Modi was not directly my minister because I was in an autonomous body but his appointees were there. The point is, I have never seen a more terrible government.

Q. How do you rate the Modi government?

I have seen the good, the bad and the ugly over 40 years. I have seen from Indira Gandhi to Manmohan Singh and some of them from very close quarters. I had to report to Singh directly once or twice every week. I found two striking qualities in the new prime minister. Number one, his autocratic arrogance. It’s one-way traffic. ‘Come and listen to whatever I have to say.’ He does not like feedback. But the administration requires feedback at every level. And number two, he does not respect professionalism, at all. In other words, he tells the doctor what is wrong with the doctor. With such qualities, maybe you can bully a state but you cannot run the administration of India. A state (Gujarat) is a small place, where you can go on threatening police officers or sending them to jails but it is not possible to run the administration of India on a highly personalised, coterie-based and vindictive basis. You can’t run a federal country of 130 crore people on the basis of a local duo.

Q. What prompted you to resign from Prasar Bharati?

Under this government, the option for a civil servant is: a) shut up and let him ruin the country; and b) I was old enough, too old to play games with him, and I had to tell him what’s wrong. The immediate result of taking the second option is he squeezes you out. In my case, it was a statutorily backed post. He required two-third majority to impeach me in Parliament. If I wanted to play games I could have stuck back – the ‘you do your worst, I do my worst’ kind of thing. But it would have hurt Prasar Bharati, for which I had empathy and I didn’t want the instituted harmed. I submitted my resignation to Arun Jaitley, the minister concerned, who was a genial person. He kind of calmed me down and it was because of him that I continued for another 7-8 months. When Jaitley left the ministry I found no point in staying on.

Q. Why did you take to active criticism of the Modi government?

The experience I got with him is that I moved away from the driver’s seat and found the owner fumbling around with the key and not knowing when to steer the wheels and claiming he has driven cars. From a professional basis, I have found him wanting, which India has also found out over the years. Not a single of his grandiose schemes has really worked, take Ujala or Ayushman Bharat, whichever you like. The input-output ratios don’t work out. The economy has gone for a tailspin. We have indices of 12-14 international benchmarks, in none of which India holds on to the position it inherited in 2014. I felt emotionally involved with the country called India and I took the risk.

Q. How would you describe the Modi government in brief?

I find incompetence under the garb of autocracy as the hallmark of this government.

Q. What response did you receive for your activism?

A. Every friend warned me over the last four years and a half saying ‘don’t go out of your way to provoke a man like him. He is dangerous.’ I carried on, nevertheless, with the blessings of god and the media houses that supported me. People who hear me think I have gone crazily against one person. It’s nothing of the sort; it’s that if that one person did one percent of rectification that would be a good thing. There is no other person in the government of India. Except one crony, he doesn’t believe anyone.

Q. How did Mamata Banerjee get in touch with you?

At some point of time, Mamata Banerjee must have observed my activism and thought she needed a person like me in the Rajya Sabha. She did not come in for any prior consultation. When she requested, I did not say no, even though I am not a political person.

Q. What’s on top of your on your agenda now?

A. My single aim is to try to expose before the people of India, a large section of whom are still mesmerised or hypnotised to believe this government is the best thing that has happened to India, even though all facts stand contrary to their belief. This can be explained as infallible guruvaad. In our Indian tradition, the guru is infallible. He (Modi) has coopted the image of the infallible guru to fool a large section of Indians. We have to snap out of this magic, we have to snap out of this hypnotism.

Q. As you are back to activism after a long long time since your university days, are you enjoying this new phase?

A. Activism is not something to be enjoyed. It’s a very scary thing. It’s a tenuous thing. When people are sleeping you are poring through documents and reports. People do not support any extreme stand. They ask, why not tolerate? Friends ask, why don’t you pipe down? You’re up against an uphill task. But then the fact is that your heart feels good when you think that you have done something that your heart told you to do.

What’s your take on the Bengal elections? Ahead of the elections, you wrote in many articles that Bengal’s culture and heritage were coming under unprecedented attack from the BJP. In the end, the Bengali sentiment seemed to have worked well for the TMC.

I was one of the persons who kept saying that the Bengal elections were not a done and dusted deal, it was not a deal that was over, Bengal was not in the pocket of the duo, even though such a perception had been created all over the country. Bengal is one of the best examples I can give you. I was not bothered about TMC as such, I was bothered about having a people’s consensus against the BJP. Here’s 48% (TMC’s vote share) of a very quarrelsome and argumentative people sunk their differences and dislike for each other to stand united in showing their strength and the BJP its place.