With Rs 80 Crore Expenditure, Here Is How Gujarat Is Prepping For Trump's 3-Hour Visit: Report

The expenditure on the preparation for Trump's visit is equivalent to about 1.5% of the annual budget of Gujarat. 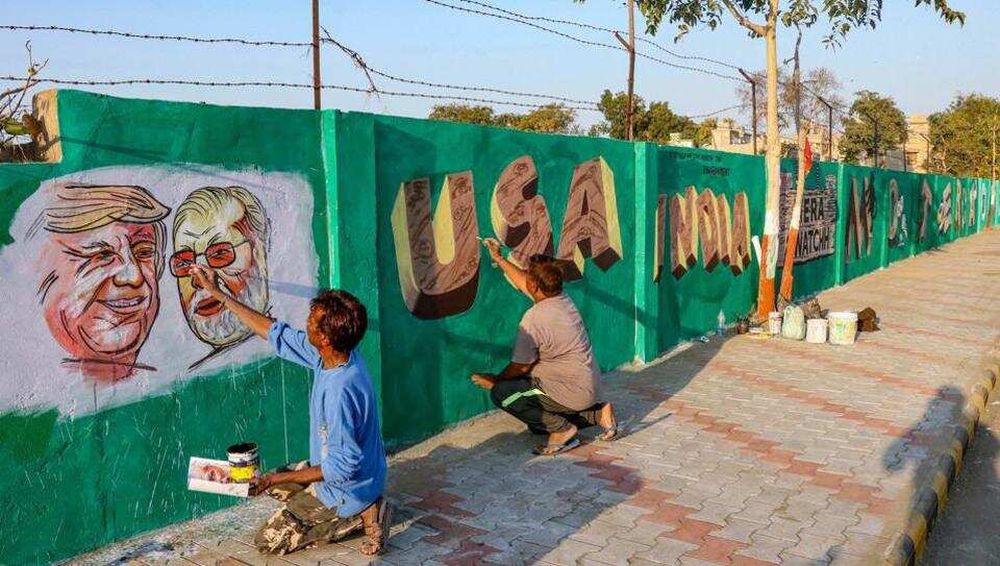 The walls along the airport road are being painted with the message of Indo-US bonhomie.
PTI Photo
Outlook Web Bureau February 19, 2020 00:00 IST With Rs 80 Crore Expenditure, Here Is How Gujarat Is Prepping For Trump's 3-Hour Visit: Report

The Gujarat government will spend around Rs 80-85 crore on the preparations for the upcoming visit of US President Donald Trump. Trump will arrive in Ahmedabad on February 24 to inaugurate world's largest cricket stadium and spend three hours in the city.

The US President is slated to address a mammoth crowd of more than 100,000 people which is expected to turn up for an event at the Motera Stadium in Ahmedabad.

The expenditure on the preparation for Trump's visit is equivalent to about 1.5% of the annual budget of Gujarat, Reuters news agency reported.

The report further said that security-related costs account for half of the expenditure. For the high-profile visit, more than 12,000 police officers will be deployed in the city.

In preparation of Trump's visit, Gujarat government and the Ahmedabad administration have stepped up the renovation and the beautification process in the city.

The administration has swiftly built a half-kilometer In Ahemadabad along the road from the airport to Indira bridge.  The area is inhabited by more than 2,000 people.

The move evoked criticism with Congress saying the government was trying to keep the slums out of Trump's sight. Ahmedabad Municipal Corporation said this slum locality is part of Sardarnagar township and the civic body has been trying to make the lives of residents there better.

At least 45 families living in a slum near the newly-built Motera stadium in Ahmedabad have been served eviction notices by the municipal corporation ahead of the scheduled visit of US President.

While officials have denied any connection with the proposed high-profile visit and issuance of notices, residents of the slum have questioned the timing of the move, which came days after the AMC began building a wall allegedly to cover a slum on a route that the US President is likely to take while visiting the city.

Gujarat has expedited the Swachhata drive, one of the flagship programs of the Modi-led government. Walls along the stretch from airport to the venue have been painted with slogans and messages depicting Indo-US bonhomie.

The administration, in line with this sanitation drive, has also sealed three paan (betel leaf) shops at the airport circle.  The move was taken to keep the area around the Airport clean.

While Trump is scheduled to visit only Ahmedabad and Delhi during his visit, an option of having a short visit to Agra is also being explored. In preparation, the Uttar Pradesh Irrigation Department has released 500 cusecs of water into the Yamuna from the Ganganahar in Bulandshahr to improve the river's "environmental condition".

This move is likely to reduce the "foul smell" from the Yamuna, Uttar Pradesh Pollution Control Board (UPPCB) assistant engineer Arvind Kumar said when asked about the development.