The Minister also said that AYUSH Ministry will clear its stance on Patanjali's 'Coronil and Swasari', claimed to cure Coronavirus, after reviewing the report sent by it. 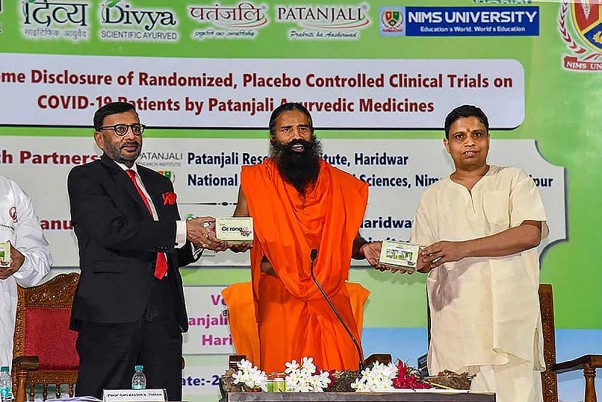 Even as pharmaceutical giant Patanjali's Ayurvedic drug, which they claim can treat Coronavirus within seven days, is under government scrutiny,  MoS for the Union AYUSH Ministry, Shripad Naik, on Wednesday said “it is good that Baba Ramdev has given a new medicine to the country.”

Naik also said that AYUSH Ministry will clear its stance on Patanjali's 'Coronil and Swasari' drugs, claimed to cure Coronavirus, after reviewing the report sent by it.

"It is a good thing that Baba Ramdev has given a new medicine to the country but as per rule, it has to come to AYUSH Ministry first. They even said that they have sent a report. We will look into it and permission will be given after seeing the report," ANI quoted Naik as saying.

The Union Ministry of AYUSH on Tuesday sought details of an Ayurvedic drug, touted as Covid-19 cure, hours after it was launched by Yoga guru Ramdev's Patanjali Ayurved Ltd. The Ministry has asked the firm to stop advertising till the drug and claims about it are examined.

The firm claimed that their two Ayurved-based medicines have shown 100 per cent favourable results during clinical trials on COVID-19 infected patients except those on a life support system.

"Facts of the claim and details of the stated scientific study are not known to the Ministry," the statement released by the Union ministry said.

A government notification bars companies from advertising a cure without government approval.

Sidestepping questions on the drug being approved by government agencies such as ICMR, Ramdev said clinical controlled study of these medicines was done in several cities including Delhi, Ahmedabad and Meerut and the RCT (Randomized Clinical Trial) controlled with placebo was conducted at Jaipur-based National Institute of Medical Sciences & Research.