As Sushanta Pal did squats on stage, BJP supporters present at the rally chanted 'Jai Shri Ram' slogans, while many looked on in bewilderment. 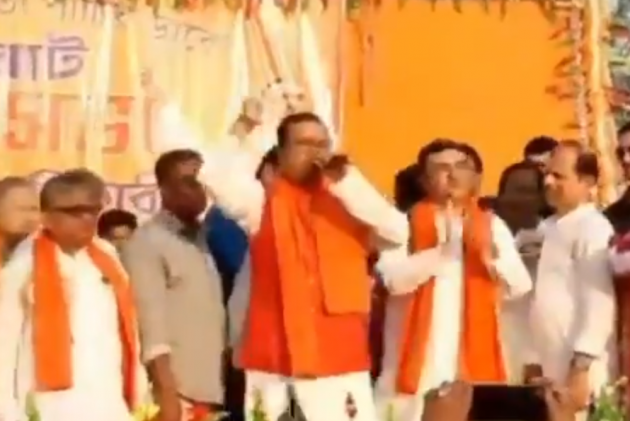 Moments after joining the BJP, a former Trinamool Congress leader did squats on stage in Purbo Medinipur district on Thursday, describing the act as an attempt to "atone past sins" during his tenure with the ruling party.

"This is atonement for my sins when I was with the tyrant TMC, and had to follow whimsical and anti-people orders of the top leadership. I regret it now," the former vice-president of Kharagpur Number 2 Block of the party said.

Sushanta Pal, known to be a loyalist of TMC turncoat Suvendu Adhikari, suddenly started doing squats, stopping his speech midway after receiving the BJP flag during a rally at Pingla area.

Alleging that the TMC did not allow free and fair panchayat polls in 2018, occupying the local bodies by force, Pal said, "I have joined the BJP as I was feeling claustrophobic. I wanted to protest but my voice was muzzled."

TMC leader Susanta Pal performed sit-ups on stage as he joined the BJP. He held his ears and did sit-ups asking for "forgiveness" for staying with @MamataOfficial's Trinamool Congress. #BengalMaangePoribortan pic.twitter.com/LieKYUq36F

As Pal did squats on stage, BJP supporters present at the rally chanted 'Jai Shri Ram' slogans, while many looked on in bewilderment.

The district unit president of TMC, Ajit Maity said, "Pal had been stripped of all responsibilities four years back. He is now indulging in 'dramabaji' (theatrics) at the behest of the BJP."

Earlier, several local TMC leaders, who were loyal to Adhikari and occupied posts such as municipality chairman, switched over to the BJP.