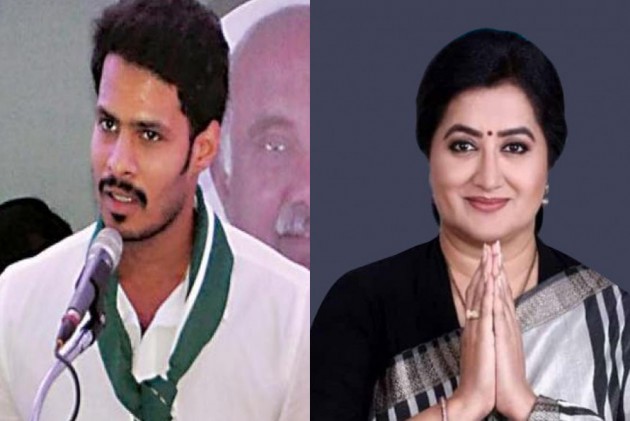 "No politics, please. Enjoy your coffee instead," was the plea a small eatery in Mandya made to its patrons a few weeks ago. Prescient, you might say. Mandya, unlike ever before, is grabbing headlines in Karnataka this Lok Sabha election -- every event, comment and cue makes news. Tune in to local TV channels and it’s all about Mandya -- cinema, sympathy, squabbles, sabotage -- supplying enough grist for the news cycle to run.

A fertile sweep of land between Bangalore and Mysore through which the Cauvery flows; where migratory birds from Siberia come to roost; where ragi mudde and mutton is relished, Mandya is a town where politics is noisy and party loyalties run deep. And when it comes to politics, the voter in Mandya can be demanding. So, his loyalty cannot be taken for granted. And, therefore, in these idyllic farmlands, there’s a duel brewing.

“I’m here to repay a debt,” says Nikhil Kumaraswamy, son of Karnataka Chief Minister H D Kumaraswamy, as his campaign van stops in a village near Malavalli. Loud cheers ring out, crackers are burst, and everybody gathers to listen. “I’m here as a symbol of Deve Gowda and HD Kumaraswamy.” Nikhil, 31, the joint candidate of the Janata Dal (Secular) and Congress, keeps his speeches short. The local MLA and other leaders flanking him, spell out the details of how, as CM, HD Kumaraswamy has allocated funds for the district.

In the crowd, a local man carrying a JD(S) flag, fills in on the gossip in a low voice. “Do you know the villagers here didn’t allow Nikhil’s campaign rally into their village? They are upset with the local MLA.”

That’s nothing unusual, says another. “Just yesterday, in another village, they were throwing stones at film actor Darshan. That’s how it is in Mandya,” he explains.

Darshan and Yash, two of Sandalwood’s most popular film stars, are campaigning for Sumalatha Ambareesh who’s fighting Nikhil in these polls. She’s the wife of film star and Congressman M H Ambareesh who died last November.

Ask people about the odds and they’ll tell you it’s a tough fight. “She’s got sympathy. People in Mandya liked Ambareesh,” points out one villager. The JD(S), meanwhile, is a formidable force here. “Kumaraswamy has increased our pension amount by Rs 400. We now get Rs 1,000 a month, that’s a big thing,” says an elderly shopkeeper.

"I'd like to ask her, what additional funds did Ambareesh bring to Mandya," says JD(S) legislator Ravi Srikantaiah at a rally in Srirangapatna to which party supremo H D Deve Gowda has just arrived. Srirangapatna, once the capital of Tipu Sultan, is a large island in the Cauvery river and just a few kilometres upstream is the Krishnarajasagar dam -- the lifeline of the green swathe of land between Mysore and Bangalore.

From funds, the focus swings to water

Three years ago, when Cauvery water-sharing crisis loomed, Deve Gowda's decision to go on a fast was enough to rattle the central government, the legislator says. As he takes the mike, Gowda traces the politics of the Cauvery dispute and how it has punctuated his own career.

Mandya’s politics is unique, many would say. Even Ambareesh, despite his fan following, lost elections here. As Chief Minister, S M Krishna, one of the tallest Vokkaliga leaders in Karnataka, didn’t contest from his hometown Maddur (located in the same district) in 2004 fearing a backlash from farmers who felt neglected during his tenure.

“It’s perhaps the only constituency in Karnataka where a single caste dominates,” points out A Narayana, who teaches political science at Bangalore’s Azim Premji University. “So, the primary affiliation is to caste rather than party.” Hence, the candidates fielded by parties in elections have always been Vokkaligas (of course, local body polls are a different matter).

In the last two decades since the split in the Janata Dal, the JD(S) has assumed an identity as a Vokkaliga outfit. Its most emphatic win in last year’s assembly elections came in Mandya – the party won all seven assembly seats in the district – which experts conclude was a response to the Congress party’s, or specifically former Chief Minister Siddaramaiah’s, taunts at Deve Gowda. Now, however, the curiosity is how the Mandya voters will respond to Deve Gowda’s grandson Nikhil.

Gowda, in his address, homes in on the point. It were his party leaders who insisted that Nikhil stand for elections, he tells the crowd. “I told them please don’t. Our opponents will attack me, unmindful of my age, saying I’m doing family politics,” Gowda says. “Today, the comments about me and Kumaraswamy, are piercing like spears.” It’s an emotional appeal the JD(S) supremo is making. For whom were his struggles for Cauvery water, he asks. “Was it for Deve Gowda’s children or his grandchildren. You decide.” Then, Gowda turns to the women, pointing out that the JD(S) had, in the past, given tickets to the widows of former Mandya legislators A B Bandisiddegowda and Siddaraju. “Who have I wronged?” asks Gowda.

It’s the day before Ugadi (the Kannada New Year which went by Saturday) and in another part of the district, the villagers are keeping away from the sweltering afternoon sun. A group of men are sitting in the bus stop, playing cards, the festive pastime. A police jeep passes by and they cover up, grinning sheepishly. Who’s winning the election? Difficult to say, answers one of them, rubbing his thumb against his forefinger. As the sun softens, the street comes to life – teenagers decorate the bus stop and electricity poles with leaves. No, they aren’t preparing for Ugadi. There’s an election campaign coming this way. Just as they are emotional, Mandya folks are a proud lot. Whether it is garlands or firecrackers to welcome candidates, each village wants to outdo the other.

What about the Modi factor? In several places in Karnataka, you’ll hear about how youngsters are attracted to the BJP. But it cuts no ice here, says a local. “The BJP doesn’t even have a candidate in Mandya. Maybe in the city you’ll find a few admirers,” he says.

Indeed, the BJP has found it difficult to put down roots in Mandya all these years – this time, it has pulled out of the race to back Sumalatha.

“I could have stayed at home and not got into this, I’m quite comfortably off,” Sumalatha, 55, tells voters. “But I'm here to save Ambareesh's legacy. You have to uphold Mandya's self-respect.”

At the villages she’s travelling through, women step out onto the street for a glimpse. Many are impressed; mostly, it’s their admiration for Ambareesh. He too has a Cauvery connection – Ambareesh had resigned as Union minister in 2007 to protest the Cauvery tribunal’s interim award. “Think about it: who will represent you better? You sent Ambareesh to Parliament thrice,” goes Sumalatha. She reminds the women about nasty personal attacks on her in the past few weeks. “This is not an insult to me alone. It’s an insult to every woman. You should reply with your vote,” she says.

In Mandya, the Congress and JD(S) workers are sworn enemies -- in 2014, the winning margin of JD(S) was just 5518 votes. But now the two parties are allies. If that wasn’t complicated enough, Sumalatha’s entry has muddied the waters further. Some local Congressmen have been expelled for rallying support to her. Then, there are other subplots – the JD(S) is angry that some of its flock which drifted to the Congress last year is now rooting for Sumalatha. That’s an added worry for the Congress – its candidate in neighbouring Mysore (which is a BJP-held seat) needs JD(S) support to win. So, the party needs to rein in the Mandya rebels if it wants the JD(S) to play ball in Mysore. This week, Deve Gowda and Siddaramaiah are scheduled to canvass together in Mandya, in a bid to show unity.

For now, the hype around Mandya isn’t likely to ease up. There’s another week left for campaigning. Mandya goes to polls in the second phase on April 18.