These Aadhaar-integrated Cameras Can Be A Game-changer In Fight Against Covid-19: Experts

The blend of Aadhaar and Artificial Intelligence can be a game-changer in the fight against Coronavirus. But it also raises a question: does it risk the privacy of the people? 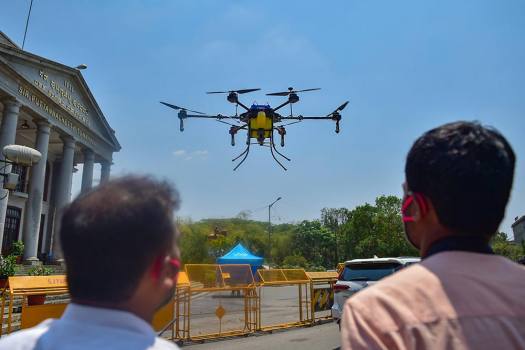 China has made the successful use of Artificial Intelligence (AI) in the fight against Coronavirus and results are obvious to the world. In India, experts say, the Unique Identification Authority of India (UIDAI) can play an unprecedented role in tackling an unseen enemy like Coronavirus.

A former UIDAI official says that if a camera that can capture an individual’s image along with the body temperature is placed at a public place and is integrated with the Aadhaar data, it can prove to be a game-changer.

How can it work?

Let’s presume that such a camera is placed in a public place. The camera can take the picture and read the body temperature of everyone present there. A software can be programmed in the camera that will identify only those people whose body temperatures read beyond a permissible limit, let’s say 100 degrees Fahrenheit.

Also Read |  From Drones For Sanitising To Robots In Isolation Wards: How Indians Are Innovating To Fight Coronavirus

The picture of such people will be sent to UIDAI database. The UIDAI has images and contact details of over 123 crore people of India. It will match the images received from the camera with its existing data and can send an alert to the government authorities. The authorities can do a physical check to find out the authenticity of the system and isolate such person.

“This is the use of data and artificial intelligence for the benefit of society. It will save a lot of manpower of the government. We should take permission from the Supreme Court and implement it,” Lal, who is at present DIG Sambalpur in Odissa said.

"UIDAI might have to make some technical enhancement for that," Lal added.

He said that manual thermal checking might have chances of error but the technology-driver system will be nearly fool-proof. “If human interference is minimised, controversies like Tablighi Jamat will not happen,” Lal said.

Technology experts also say that any work on this line will have game-changing results.

A senior official working with the National Informatics Centre, which has developed Aarogya Setu mobile app to alert people from the risk of COVID-19 infection, says that people having fever can be tracked with Aadhaar data and government can intercept them from their home address or by tracking location through their mobile.

Also Read: From Worst To A Role Model, How Bhilwara Turned The Corner In War Against Coronavirus

“The same can also be used with drones having such cameras at market places or other crowded places,” he said on the condition of anonymity.

Companies dealing with AI say that today such cameras are available that can recognise the face and measure the temperature of people even with masks.

“In technology, the thermal cameras being originated from China may be giving readings with high error rates; that may be counter-productive for such initiative to implement technology for countering COVID-19 spread,” Bikas Jha, Country Head, RealNetworks said.

He added, “In my view, Indian companies should not shy away from taking technological help or forging collaboration with reputed US, EU, Japanese or Korean companies who have excelled in developing such solutions with the high-level of accuracy in temperature measurement and facial recognition.”

However, the question is, “Is it legitimate to use Aadhaar data for this purpose?”

The present Aadhaar Act doesn’t allow the government to use the data for such purposes.  “The 5 judge bench decision in the Aadhaar case looked at the constitutional validity of the Aadhaar law and considered that the failure to establish the identity of a person is a major hindrance in the successful implementation of welfare programmes. Protection of life and providing of healthcare is part of a state's duty under Article 21,” Sidharth Luthra, former additional solicitor general, said.

He added, “Hence Aadhaar usage in the battle against the Wuhan virus is legitimate though it may require the issuance of regulations under the Act.”

Senior SC lawyer, Sanjay Hegde, who backed the right to privacy in Aadhaar case in the Supreme Court, said that even at a public place there is a presumption of privacy but any breach of that could possibly be made proportionate.

“While definitely it is a breach of privacy, the question is whether you can make it proportionate,” he said.

According to Hegde, if such a system serves as a starting point for investigation for an individual to be asked to turn up for health check-up, it could possibly be justified.

“It should not result in warrantless surveillance.”