Two of the three fake survey reports are related to Nandigram, the constituency where TMC chief Mamata Banerjee is pitted against BJP’s Suvendu Adhikari 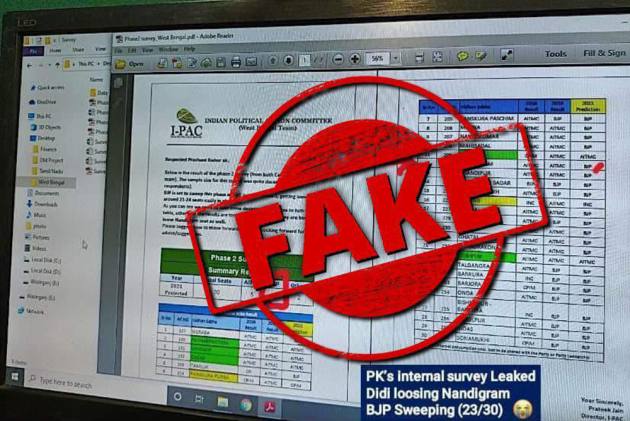 At least three “survey reports” are doing the rounds in Bengal’s social media sphere and as printed leaflet formats, predicting victory for either the Trinamool Congress (TMC) or the Bharatiya Janata Party (BJP), leading to registration of at least one police case in the state.

Of these, two “survey reports” that went viral on social media concerns Nandigram, from where chief minister Mamata Banerjee is contesting in a high-voltage battle with her one-time lieutenant Suvendu Adhikari, now with the BJP. Nandigram is going to polls on April 1.

The purported surveys were allegedly conducted by poll strategist Prashant Kishor’s organisation, Indian Political Action Committee, or the I-PAC, and have predicted a defeat for Mamata Banerjee in Nandigram.

The first such report was only about Nandigram, predicting each candidate’s vote share up to decimal points. The I-PAC was quick to call out this as fake. In a tweet on March 29, the organisation wrote, “Anticipating a huge loss, @BJP4Bengal has resorted to doing what it does best – spread fake news! This document is fake $ and has ZERO credibility, just like BJP’s leaders & their promises! Circulating such fake reports won’t work.”

BJP IS LOSING BIG IN NANDIGRAM!

Anticipating a huge loss, @BJP4Bengal has resorted to doing what it does best- SPREAD FAKE NEWS!
This document is fake & has ZERO credibility, just like BJP’s leaders & promises!
Circulating such fake reports won’t work!#BohiragotoChaiNa pic.twitter.com/YK1ThHYdk2

On March 31, I-PAC had to take to social media again to call yet another “survey report” attributed to it as fake. This was a screenshot from a desktop computer showing a PDF file predicting the results of all the 30 Assembly seats going to the polls on April 1, including Nandigram. The “report” predicted 23 of the 30 seats for the BJP, including Nandigram.

The text accompanying I-PAC’s tweet calling out the image as fake said, “Facing imminent defeat, @BJP4Bengal has now gone down to the level of using FAKE surveys in the name of I-PAC to keep the morale of their workers up!! P.S: In I-PAC, no one uses desktops so at least be smart in your effort to create fake survey/ reports.”

Facing imminent defeat, @BJP4Bengal has now gone down to the level of using FAKE surveys in the name of I-PAC to keep the morale of their workers up!!

P.S: In I-PAC, no one uses desktops so at-least be smart in your effort to create fake survey / reports! ðÂÂÂÂÂÂÂÂÂðÂÂÂ¤£ pic.twitter.com/lFaOo0DshU

Till Wednesday afternoon, there was no news of any formal police complaint lodged by the I-PAC with regard to these “survey reports”.

However, in West Midnapore district, parts of which polled in the first phase and the rest will poll on April 1, the police have lodged a complaint after getting in hand leaflets printed using the logo of the state police. The leaflet claimed to be made of an intelligence report prepared by the police on the probable election result in Keshpur assembly seat and said that the TMC stood ahead of the BJP.

The district police has categorically denied having conducted any such survey.
Another leaflet that was distributed in parts of Chandrakona Road assembly seat, was a survey attributed to the Rashtriya Swayamsevak Sangh (RSS), the parent organisation of the BJP, and predicted the TMC’s win in the assembly seat. The RSS has denied having conducted any such survey.

Yet another ‘internal letter’ went viral on social media over the past couple of days. This one is a purported letter written by the BJP’s Bengal unit president Dilip Ghosh to the party’s national president J P Nadda. In that letter, Ghosh was purportedly reporting Nadda that the party’s state unit conducted an internal survey which predicted only 2-4 seats for the BJP among the 30 that went to the polls in the first phase.

Union home minister Amit Shah had earlier claimed a day after the first phase polling that the BJP will bag 26 of these 30 seats.

Dilip Ghosh has termed this letter as “absolute rubbish” and saw “thumbprints of PK’s team’s work”. By ‘PK’, he was referring to Prashant Kishor.

Meanwhile, the BJP on Wednesday submitted a deputation with the Election Commission of India, demanding implementation of section 144 of the CrPC in Nandigram on the polling day. On the other hand, the TMC has submitted a deputation with the ECI listing names of places and houses in Nandigram where alleged hooligans and outsiders have gathered at the behest of the BJP’s Nandigram candidate.