Ministry of External Affairs' reaction came a day after the US Commission on International Religious Freedom (USCIRF) expressed "grave concern" over the violence in Delhi and asked the Indian government to provide protection to people irrespective of their faith. 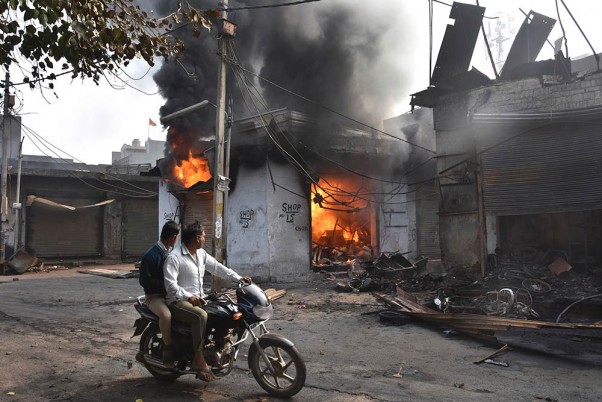 A motorcyclist drives past shops that were set on fire by mobs in New Delhi.
AP Photo
PTI February 27, 2020 00:00 IST ‘Factually Inaccurate, Misleading’: India On US Commission’s Remark On Delhi Riots

India on Thursday described the comments by a US commission on religious freedom and by "few individuals" over violence in the national capital as "factually inaccurate, misleading" and an attempt to politicise the issue.

Ministry of External Affairs Spokesperson Raveesh Kumar's reaction came a day after the US Commission on International Religious Freedom (USCIRF) expressed "grave concern" over the violence in Delhi and asked the Indian government to provide protection to people irrespective of their faith.

US presidential candidate Bernie Sanders and a number of other leading American lawmakers have also expressed concern over the clashes in several parts of Delhi in which at least 32 people have been killed.

“We have seen comments made by USCIRF, sections of the media and a few individuals regarding recent incidents of violence in Delhi. These are factually inaccurate and misleading, and appear to be aimed at politicising the issue," Kumar said.

Though MEA did not clarify the individuals being referred to, it is being seen as a reference to US lawmakers critical of India on the issue of the Delhi violence.

Kumar said law enforcement agencies are working on the ground to prevent violence and ensure restoration of confidence and normalcy.

"Senior representatives of the government have been involved in that process. The prime minister has publicly appealed for peace and brotherhood. We would urge that irresponsible comments are not made at this sensitive time," said Kumar.

On Wednesday, the USCIRF said, "The ongoing violence we are witnessing in Delhi and the reported attacks against Muslims, their homes and shops, and their houses of worship are greatly disturbing."

"One of the essential duties of any responsible government is to provide protection and physical security for its citizens, regardless of faith," it added.