Sukh Ram's grandson Ashray Sharma may be the Congress candidate against the BJP's Ram Swaroop Sharma from Himachal Pradesh's Mandi, the family turf. 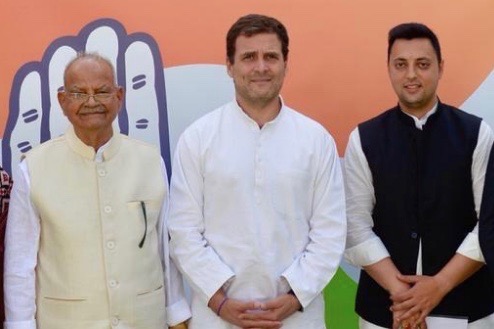 Former Telecom Minister Sukh Ram and his grandson Ashray Sharma on Monday rejoined the Congress, after parting ways from the BJP.

The latter may be the Congress candidate against the BJP's Ram Swaroop Sharma from Himachal Pradesh's Mandi, the family turf.

Sukh Ram's son Anil Sharma, an MLA from the Mandi Sadar Assembly seat, is a Cabinet minister in the Jai Ram Thakur-led BJP government in Himachal Pradesh and is expected to quit his ministerial berth.

The family joined the BJP just before the 2017 assembly polls.

Anil Sharma was inducted into the Virbhadra Singh-led Congress Cabinet in 2013 and allocated the portfolios of Rural Development and Panchayati Raj and Animal Husbandry. He was also a Minister of State from 1993-97.

Elections to the four Lok Sabha seats in Himachal Pradesh will be held on May 19.