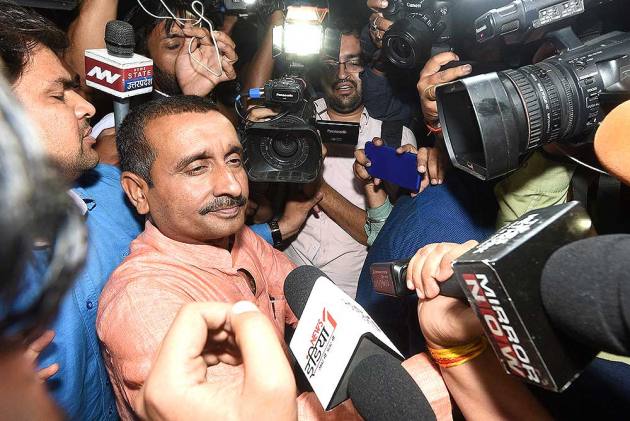 A court in Delhi on Wednesday convicted expelled BJP MLA Kuldeep Singh Sengar of culpable homicide not amounting to murder in the death of the Unnao rape victim's father.

The rape victim's father had died in judicial custody on April 9, 2018.

"He was beaten in a brutal manner that led to his death," the judge said.

The Central Bureau of Investigation (CBI) had examined 55 witnesses in support of the case and the defence examined nine witnesses. The court had recorded the statements of the rape survivor's uncle, mother, sister and one of her father's colleague who claimed to be an eyewitness to the incident.

Singh denied them the lift, triggering an altercation among them. Singh called his associates, following which Kuldeep Sengar's brother Atul Singh Sengar reached the spot along with others and beat up the woman's father and his co-worker.

The woman's father was subsequently taken to the police station by them where an FIR was lodged against him and he was arrested.

The charge sheet said that all this while Kuldeep Sengar was in touch with the district police superintendent and Makhi police station in-charge Ashok Singh Bhadauria. Later he also spoke to the doctor who examined the rape victim's father.

Charges were framed against Sengar, his brother Atul, Bhadauria, sub-inspector Kamta Prasad, constable Amir Khan and six others in the case. The case was transferred to Delhi from a trial court in Uttar Pradesh on the directions of the Supreme Court on August 1 last year.

In July, 2019 a truck rammed into the car the rape victim was travelling in with some family members and her lawyer. Two of her aunts died in the incident. She was airlifted from a hospital in Lucknow and to AIIMS in Delhi.

The victim has been provided accommodation in Delhi and is under CRPF protection.