The Congress on Sunday carried out the 'SpeakUpForDemocracy' online campaign to back Ashok Gehlot amid the political crisis in Rajasthan, and plans for nationwide protests to ramp up the pressure. 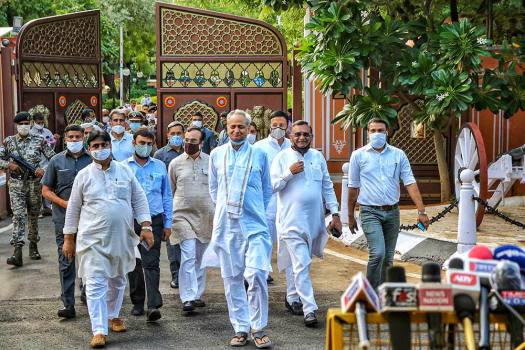 Taking part in the Congress' online campaign to "expose" the "BJP's designs to violate" constitutional and democratic norms, Rajasthan Chief Minister Ashok Gehlot claimed that "democracy is in danger" and the entire country is "worried by the way elected governments are being toppled".

The party on Sunday carried out the "SpeakUpForDemocracy" online campaign to back Gehlot amid the political crisis in Rajasthan, and plans for nationwide protests to ramp up the pressure.

About his government demanding the governor to call an Assembly session, the chief minister said, "The ruling party is always reluctant to call a session and the opposition always demands for it. But here, we are demanding. Till now, we have not received a reply."

The Congress on Sunday accused the Rajasthan Governor of resorting to the "worst kind of obstruction of democracy" by raising "superficial and motivated" queries on Ashok Gehlot government's demand for convening a session of the state assembly.

Gehlot, however, said the governor is an amiable, and tactful person who has great dignity for his office. "This is a constitutional post. He will order us soon, we will call the assembly session."

The Governor is concerned about the coronavirus pandemic and has praised the arrangements made by the state government in the fight against the viral disease, the chief minister said, adding that discussion on the state's economic situation as well on political issues will be held in the Assembly.

Targeting the BJP, he said, "The coronavirus crisis is not over. Instead, it is aggravating. You have started moving towards Rajasthan after Madhya Pradesh. What is happening? The whole country is worried and I am hopeful that they will understand this."