Lauding Abhishek as a 'very responsible and mature' leader, Roy said the new generation's leadership would strengthen the party. 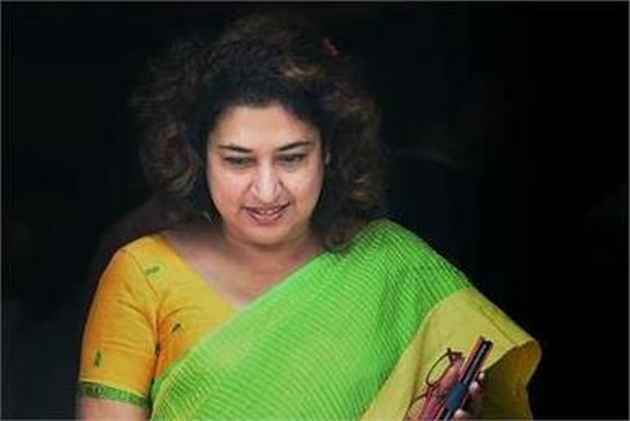 Birbhum TMC MP Satabdi Roy, said on Saturday that those having problems should discuss the issues with the party instead of looking for other options. Roy last night called a truce with the party after a brief rebellion that sparked speculations of her flight to the BJP

An actor-turned-politician, Satabdi Roy is a leading face in the

Mamata Banerjee's cultural brigade. Roy said it would be "unethical to look for other options" when the party is facing a tough fight.

Is 'Snubbed' TMC MP Satabdi Roy On Her Way Out Too? Decision On Saturday

Roy also praised TMC leader and MP Abhishek Banerjee, through a Facebook post for giving her a patient hearing and said she "is pleased with the way the young leader assured" her of resolving all the issues.

"All the issues have been sorted out. The party will look into the issues. I want to tell all the co-workers that if they are having any problem, they should discuss the matter with the party, instead of looking for other options," she told PTI.

Roy had taken an about-turn the previous day and asserted that there was no question of her leaving the Trinamool Congress after a two-hour-long meeting with Abhishek Banerjee, Diamond Harbour MP and nephew of Chief Minister Mamata Banerjee.

She cancelled her trip to the national capital Saturday accordingly.

When asked about her opinion on the ongoing exodus from the party, Roy said "a few are doing so out of overambition while in some other cases there is a communication gap with the party leadership".

In a Facebook post on her Fans Club page later, Roy exuded confidence of the TMC returning to power for the third consecutive time.

Polls to 294-member Bengal assembly are due in April-May this year.

The TMC is facing a stif challenge from a resurgent BJP which after a stupendous performance in the 2019 general election in the state is making all efforts to win the Bengal polls.

"Those who are workers or leaders of Trinamool may have some grievances, like me. We will solve it as a team. Now it is the time to put up a united fight," she said in her post.

Lauding Abhishek as a "very responsible and matured" leader, Roy said the new generation's leadership would strengthen the party.

The TMC leadership had reached out to her as she voiced discontentment amid an ongoing exodus of leaders from the party ahead of the assembly elections.

Roy, an actor-turned-politician who is a leading face in Mamata Banerjee's cultural brigade, had claimed that she was not being informed about party events in her constituency, causing "mental pain".

Roy, who had snatched the Birbhum seat from CPI(M) heavyweight Ram Chandra Dome in 2009 on debut, managed to win it by an overwhelming margin in 2019, even as the BJP routed the Trinamool Congress in the nearby constituencies.

She was last seen with the chief minister during a roadshow in Bolpur on December 29.

Amid a rising BJP in the state, the Trinamool Congress is facing an exodus in the top and middle orders ahead of the assembly elections.

Last month, Suvendu Adhikari, along with 35 party leaders including five MLAs and an MP, joined the BJP, setting off a churning as several disgruntled leaders rallied behind him.