Gambhir says things will now start getting better in Delhi as Home Minister Amit Shah is personally taking care of the national capital. 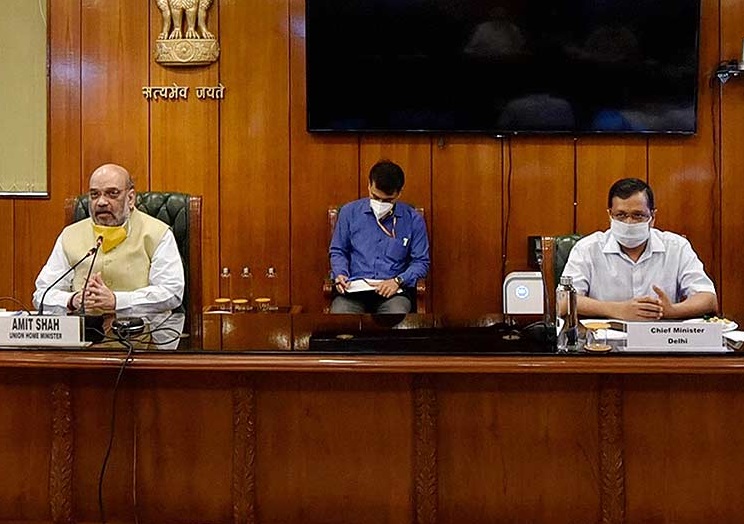 It is the Delhi government’s complacency that led to the collapse of the capital’s healthcare system amid Covid-19 pandemic, says former cricketer and Bharatiya Janata Party (BJP) MP Gautam Gambhir. In an interview to Outlook's Preetha Nair, Gambhir says that the capital is getting back on track after Union Home Minister Amit Shah’s effective intervention. Excerpts from the interview:

You and Aam Admi Party (AAP) MP Sanjay Singh had a spat on social media over the new Covid facility centre in Chattarpur. AAP says that the BJP is trying to take credit...

BJP doesn’t want to take any credit. I want to make one thing very clear. When I spoke to Home Minister Amit Shah, he said that he was going there to inspect the facility. Mr Singh alleged that the Home Minister was going to inaugurate it. Singh needs to get his facts right. HM had also invited chief minister Kejriwal to check the facility. It was not about the inauguration.

If the Covid centre was done by the Delhi government, they wouldn’t have named it after Patel. It was only after HM’s intervention that the 10,000-bed facility came about. Otherwise, no one was talking about it.

But the CM is all praise for the Centre’s assistance in fighting the pandemic...

Kejriwal loves playing those emotional games. If he had done anything in the last four months, he could have taken the credit. He knows that the situation is under control because of HM’s intervention. The CM wasn’t able to handle the crisis, that’s why he sought the intervention of HM and the BJP. Kejriwal plays dirty politics but the BJP doesn’t. Now people got to know who betrayed Delhi and who deserves credit.

Do you think the Delhi government did a poor job in fighting the pandemic?

There was no planning and the Delhi government was directionless before June 14, that is before Amit Shah intervened. After Mr Shah had a high-level meeting with Kejriwal and others, things started falling in place, especially the 10,000-bed facility in Chattarpur, which has been done by the Indo-Tibetan Border Police (ITBP). A lot of testing has been happening after that. There is better coordination between the authorities and I can see positive signs now.

What are the policies that the Centre brought in the last 14 days?

Where were the 10,000 beds earlier? They could have done it three months back. No testing was happening. And why wasn’t the capping of the fee for private hospitals not done before? I proposed to the CM about the capping of the Covid package of private hospitals, so that it can be affordable to the public. Why all of it happened after the HM intervened? The credit goes to the HM. Since he is taking care of Delhi personally, things will start getting better.

You are saying that the BJP MPs were not consulted?

We had given suggestions to the CM, but none of it was implemented. We were always there to support him. All the MPs have extended support to him from the beginning. It’s the CM's responsibility to consult us. He had only one Zoom meeting with us. He didn’t show the intent. But the HM has shown the intent and things fell into place.

There were confusion and chaos over quarantine policies by the Delhi lieutenant governor (L-G). Don’t you think it hurts the health system?

Now everything has been sorted out. Everyone will have to work together now. Ultimately, the big sufferer will be the public. Whether it’s Kejriwal or L-G, whoever in power, need to think about Delhi and the well- being of its people.

Do you think the state government did not use the lockdown period to ramp up facilities...

The results are there to see. Otherwise, Delhi wouldn’t have surpassed Mumbai in covid cases. It’s not the time to politicise what has happened in the past. Had things been done properly in the first couple of weeks or months, we wouldn’t have been in such a situation. The government wasn’t inclined to take it seriously. They failed in providing PPE kits, testing kits or ration to the migrants...

But PPE kits and testing kits should come from the Centre..

The Delhi government claimed that they are taking care of one crore migrants. The CM said that they have money to buy PPE kits. But they didn’t buy a single PPE kit. It was all false claims made by the CM. While Kejriwal was busy making big announcements, private hospitals were acting like the mafia in the capital. Why didn’t he file FIR against private hospitals?

Delhi government says that they have been testing more than any other states...

The Delhi government has promised many things. They said that 30,000 beds are available. But when the case reached the High Court, they said that there are only 2,500 beds. If the CM was transparent, they should have put out proper data. People were running from pillar to post for beds. They should have given the details on the app.

Do you think Delhi eased restrictions in a hurried way during Unlock 1?

Kejriwal had to open quickly because the government had no money. He had given everything on free before the election. So he had to open liquor shops to survive. Everything went haywire after the opening of liquor shops. Cases surged after that. Kejriwal has no contingency plans in place. He should learn from states such as Punjab and Kerala. Uttar Pradesh government took 16 lakh migrants back in the state...

Why didn’t the central government interfere earlier then?

All this while, the CM kept saying that things are under control. He asked the Centre to intervene only after people started suffering.

The Delhi government says their hands are tied...

If everything has to come from the central government, then why is the CM for? To hold press conferences? He can take decisions on providing free electricity and water. If someone questions him, then his hands are tied.