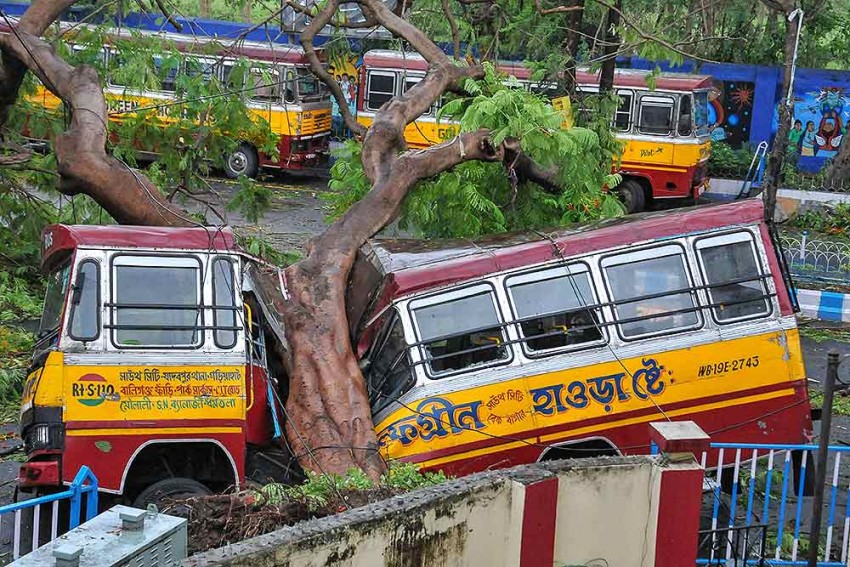 Mangled remains of a bus after a tree fell on it during Cyclone Amphan, in Kolkata.
PTI Photo
PTI 2020-05-22T10:54:09+05:30 'Cyclone Amphan Even More Destructive Than Cyclone Aila': United Nations 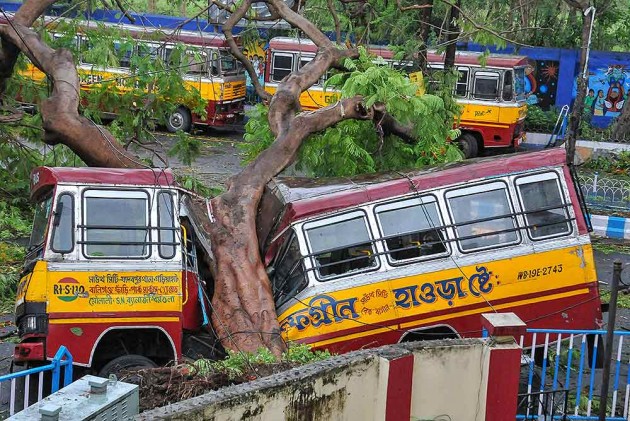 Cyclone Amphan, which has killed 77 people and left thousands homeless in West Bengal, is now considered even more destructive than Cyclone Aila which slammed southern Bangladesh and eastern India in 2009, the UN has said.

Cyclone Amphan, the strongest to hit the region in nearly two decades, made landfall on Wednesday evening. It has battered several parts of the state, washing away bridges and swamping low-lying areas.

"The UN Country Team in India reported that Cyclone Amphan, which caused widespread damage around Calcutta is now considered even more destructive than Cyclone Aila, which slammed the region in May 2009," the UN said in a news report.

Power and telecommunications have been affected across the cyclone-affected districts and North and South 24 Parganas are facing water scarcity. Massive damage is also expected to standing crops and plantations.

The UN report said that while fires have maimed transformers and telecommunications in Kolkata, uprooted trees and damaged electric poles have caused power cuts.

Several roads have been blocked, shops damaged, and streets waterlogged from the heavy rainfall during high tide. Embankment breaches have occurred throughout the state while water inundation and wind have damaged Kolkata airport.

Prime Minister Narendra Modi will travel to West Bengal and Odisha on Friday to take stock of the situation in the wake of Cyclone Amphan, the Prime Minister's Office tweeted.

"He will conduct aerial surveys and take part in review meetings, where aspects of relief and rehabilitation will be discussed," it said.

The world organisation said UN humanitarians and partners were working hard to assist the people of Bangladesh and India suffering from the impact of the cyclone, which made landfall on Wednesday, wreaking havoc, causing high tidal surges, flooding and embankments to collapse.

The UN's children's agency UNICEF, which is closely monitoring the situation with state departments, expressed concern that the COVID-19 could deepen the cyclone's humanitarian consequences in both the countries.

UN Spokesperson Stephane Dujarric said that around 10 million people in Bangladesh were impacted by the cyclone, with half a million families potentially having lost their homes.

UNICEF has said that at least 19 million children in parts of Bangladesh and India are at imminent risk from flash flooding, storm surges and heavy rain as Cyclone Amphan made landfall.

West Bengal, "home to more than 50 million people, including over 16 million children, is expected to take a direct hit from the powerful storm," the UN agency had said in a statement Wednesday.

UNICEF said it was also very concerned that the COVID-19 could deepen the humanitarian consequences of Cyclone Amphan in both countries.

Evacuees who have moved to crowded temporary shelters would be especially vulnerable to the spread of respiratory diseases like COVID-19, as well as other infections.

Bangladesh has shifted over 20 lakh people to storm shelters and deployed the military to deal with the powerful cyclone.

Leading global storm tracker AccuWeather on Tuesday described Amphan as the first super cyclone in the Bay of Bengal since 1999.

Over 6000 Coronavirus Cases In India In 24 Hrs, Biggest Single-day Spike