Coronavirus Lockdown: Migrant Workers Run Away From Quarantine Shelters In UP

On Wednesday, 26 persons escaped from the shelter home in Faridipur in Sultanpur district where a total of 112 workers had been quarantined. 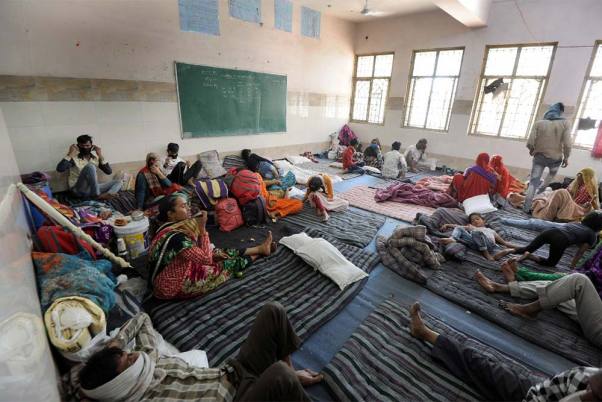 Migrant workers take rest inside Delhi Government School during a nationwide lockdown, imposed in the wake of coronavirus pandemic, at Gazipur in Delhi.
Photo by Jitender Gupta/Outlook
PTI April 03, 2020 00:00 IST Coronavirus Lockdown: Migrant Workers Run Away From Quarantine Shelters In UP

Upset over being kept away from their families, migrant workers who have been quarantined in various districts in Uttar Pradesh, have now started running away from the shelters.

Reports coming in from districts say that an increasing number of quarantined workers are escaping from the shelters.

Officials, however, deny such reports and say that all is well with the quarantined persons.

On Wednesday, 26 persons escaped from the shelter home in Faridipur in Sultanpur district where a total of 112 workers had been quarantined.

Four of them were caught and brought back while 22 have not been traced yet.

On the same day, in Hathras, 35 migrants, who had returned to the district in the past 15 days and were quarantined at Bisawar Primary School, escaped from the government facility at night.

He added that six persons had returned, but 29 were still missing.

"The administration will soon locate and put them again at the quarantine facility. However, none of them had symptoms of Covid-19 but were quarantined for 14 days as a precautionary measure," he said. One of the persons who was quarantined at Bisawar Primary School claimed that around 55 persons were present inside the facility on Wednesday and after having dinner only 12 persons remained. He claimed that security guard was also not available at night.

On March 29, Chief Minister Yogi Adityanath had directed district officials to quarantine people who had arrived in the state during lockdown from other parts of the country. Their names, addresses and phone numbers have been made available to the district magistrates and they are being monitored.

As per available figures, around three lakh migrant workers, started marching towards Uttar Pradesh after the announcement of the 21-day nationwide lockdown on March 25.

Meanwhile, psychiatrist R.K. Shukla, said that staying in a shelter home was apparently adding to the psychological stress of the workers, forcing them to flee.

"As it is most of them have walked miles to reach home and now, they are being quarantined. The reasons have probably not been properly explained to them. Most of them are complaining of inadequate food and other facilities. Besides, men and women are  kept in different centre and this separation of families is taking its toll which is making them escape and attack the staff," he explained.

The psychiatrist further said that those in charge of the shelter homes should make an effort to counsel the inmates, keep them busy with games and other activities.