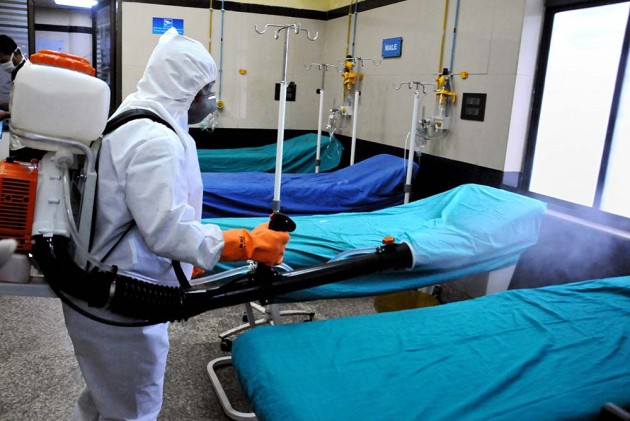 The death toll due to COVID-19 rose to 16 in the country and 80 fresh cases were reported, taking the tally to 694, the Union health ministry said on Thursday, but asserted that the rate of increase in the positive cases was "relatively stable" in India.

The Union health ministry officials also said India was at the second stage as there is still no "hard evidence" to say that there has been community transmission of the fast-spreading coronavirus, remarks which may provide anxious citizens with much needed assurance and hope.

As the virus kept extending its footprint, the Central and state governments unleashed measures on a war-footing. While the Union finance ministry unveiled a Rs 1.70 lakh crore economic package involving free foodgrain and cooking gas to poor for the next three months, one-time doles to women and poor senior citizens among other benefits, and the health ministry announced that 17 states have started to earmark hospitals for dedicated treatment of COVID-19 patients.

'No One Will Go Hungry': Centre Announces Rs 1.70 Lakh Crore Package For Poor Amid Coronavirus Lockdown

Opinion | Is Coronavirus Planet Earth's Way Of Controlling Its Own Destiny?

Addressing a media briefing on the COVID-19 situation, health ministry joint secretary Lav Agarwal said,"there is still no hard evidence to say there has been community transmission of coronavirus in India” and assured that the country was geared to tackle the coronavirus challenge.

While the numbers of COVID-19 cases are increasing, “there appears to be relatively a stable trend or even little bit reduction in the rate at which they are increasing,” Agarwal said.

"This, however, does not establish a clear trend. We are hopeful that by following social distancing policy, conducting a proper contact tracing and by ensuring all people at home quarantine are monitored, we will be able to combat the disease," he said.

Prime Minister Narendra Modi on Tuesday announced a nationwide lockdown for 21 days, in a desperate measure to contain the spread of the virus. Globally, the death toll from the coronavirus has risen to 21,293 with more than 471,518 cases reported in over 170 countries and territories, according to data from Johns Hopkins University.

While the health ministry data showed 16 COVID-19 deaths, the state-wise break up did not add up to the same.

According to the data, the number of active COVID-19 cases in the country stood at 633, while 44 people were either cured or discharged and one had migrated.

The number of cases in Telangana has gone up to 44, including 10 foreigners.

Karnataka has reported 55 COVID-19 cases, while the number of cases in Gujarat has climbed to 43, including a foreigner.

Punjab has reported 33 cases, while 30 COVID-19 cases have so far been detected in Haryana, including 14 foreigners.

The number of cases has climbed to 26 Tamil Nadu, including six foreigners. Madhya Pradesh has recorded 20 cases, Ladakh and Jammu and Kashmir 13 each, Andhra Pradesh has reported 11 cases each, while West Bengal has 10 COVID-19 patients.

Chandigarh has reported seven cases, Bihar and Chhatisgarh have registered six cases each while Uttarakhand has five, including a foreigner.

Himachal Pradesh have reported three cases each, while two cases have been detected in Odisha.

Goa has reported three coronavirus cases. Earlier, the ministry had wrongly attributed 33 cases to the coastal state. Subsequently, the figure was revised.

Puducherry, Andaman and Nicobar, Mizoram and Manipur have reported one case each.

According to experts, there are four stages of the infection -- stage 1 or imported and sporadic cases :When only those who have travelled to virus-hit countries test positive, stage 2 or local transmission: When the source of the transmission is known and can be located, usually with ones close to the patient such as family or people s/he have come in contact with. Those who test positive at this stage are those who have a history of travel to affected countries or are in close contact with those who have.

Stage 3 or community transmission :When the source of the infection cannot be located. This happens when a patient tests positive despite no exposure to an infected person nor any history of travelling to an infected country. Many countries, including Italy and Spain have reported such cases and stage 4 : When the disease is termed an epidemic, or an outbreak so severe with no clear end point for the ongoing transmission.