The three MPs from Punjab have been sitting on a dharna at Jantar Mantar in Delhi for two months now demanding the repeal of the three farm laws. 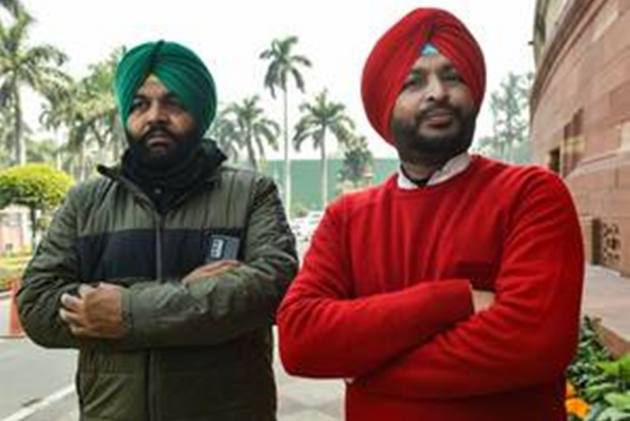 During the presentation of the Union Budget, Congress MPs from Punjab, Gurjeet Singh Aujla, Jasbir Singh Gill and Ravneet Singh Bittu, on Monday wore black robes in Lok Sabha to express solidarity with protesting farmers and against the three farm laws.

The three MPs on Monday first protested outside Mahatma Gandhi's statue in Parliament house complex and raised slogans against the government, alleging that it is "anti-farmer" and is not listening to the voice of farmers.

The three MPs from Punjab have been sitting on a dharna at Jantar Mantar here for two months now demanding the repeal of the three farm laws.

"We wore black clothes during the budget presentation as a mark of solidarity with the protesting farmers and against the 'anti-farmer' attitude of this government which is not repealing the farm laws as demanded by the farmers," Gill told PTI.

Various slogans were written on the black robes sported by the three MPs like 'farm laws responsible for death of farmers, should be repealed', 'black laws should be scrapped' and 'I am a farmer, I am a farm labour, please do not deceive me'.

Gill said since the budget presentation was a constitutional function, they did not create any disturbance when Finance Minister Nirmala Sitharaman presented the Union Budget for 20021-22.

The three Congress MPs also met former Congress president Rahul Gandhi inside Parliament house and told him about their protest.

The Congress has been demanding the repeal of the farm laws and said it stood with the protesting farmers and their demands.

Thousands of farmers, mostly from Punjab, Haryana and parts of UP have been protesting at Delhi's borders for over two months now, demanding a rollback of the Farmers' Produce Trade and Commerce (Promotion and Facilitation) Act, 2020, the Farmers (Empowerment and Protection) Agreement on Price Assurance and Farm Services Act, 2020 and the Essential Commodities (Amendment) Act, 2020.