Congress president Rahul Gandhi will contest from a second seat in Kerala's Wayanad. Congress is confident that Wayanad will change its electoral fortunes in the south and in the country. 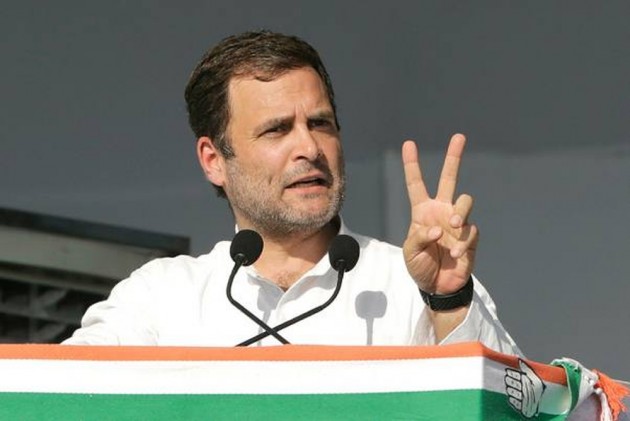 It is now official. Congress president Rahul Gandhi will contest general elections from a second seat in Wayanad, the Lok Sabha constituency created in 2008 after fresh demarcation of seats. Rahul is scheduled to file his nomination from the predominantly tribal district of Kerala on Monday.

As the dust settles down and initial euphoria of a Gandhi family member contesting from Kerala subsides, the local leaders will have their task cut out. The strategy, according to a senior Congress leader from Kerala, will be to use this as an opportunity to capture more seats for the Grand Old Party in southern states.

“When a leader of Rahulji’s stature represents a constituency in the South, it has a lot of positives not only for the constituency but for the whole of South,” T Siddique, Kozhikode District Congress Committee president told Outlook.

Rahul Gandhi's Foray Into Kerala A Twist In The Tale

It is a strategic move by Congress to ensure Rahul’s assured win. The constituency has always been a Congress fort. In 2014, M.I. Shanavas won this seat with 3.77 lakh votes, while the runner up from Left got 3.55 lakh votes and the BJP 80,752 votes. He had won it with a difference of more than 50,000 seats in 2009 elections.

Congress is confident that Wayanad will change its electoral fortunes in the south and in the country. Reasons? If Rahul wins in Wayanad, the indications of which are very strong, Wayanad will have the comfort of easy inflow of investments, both domestic and foreign.

“It will help in addressing problems faced by the unorganised sector that was badly hit, especially in North by demonetisation. South has been a major manufacturing hub and the consumers have been in the North. But since the people were hit by the economic impact of demonetisation and were unable to purchase, it hit the industries in the South too. By different tax incentives to promote manufacturing, UPA is trying to revive the investments in South and with schemes like NYAY, it is offering some money to buy,” points Professor Arun Kumar, a leading economist and former professor at JNU. Will it succeed? Kumar says, “It would require some tweaking and proper estimation.”

With the investment and industry issues taken care of, Rahul can concentrate on agriculture issues and farmer-centric policies currently plaguing the nation. Wayanad leads in the demand for processing units for rich spices, agriculture and fruits produced by farmers not only Kerala, but the entire southern belt of Karnataka, Tamil Nadu, Andhra Pradesh, and Telangana.

It is an issue that the Congress president hopes to resolve by setting up food processing and exporting units in the mega food parks. “Wayanad is badly in need of a policy to manage its rich spices and poor tribals. Rahul Gandhi as Wayanad MP can play an important role. The district and South will get international attention and the benefits will accrue from that,” says Dr. Shanavas Palliyal, a dentist in Wayanad.

A strong Congress in South can deflect any political deficit it may face in North, says an independent political analyst appointed by Karnataka Congress during Assembly elections. He says over the last four years, the Congress would have observed the inability of the BJP to make inroads in South.

“With Rahul Gandhi contesting from South, Congress will try to highlight the neglect these states have faced during NDA period,” points Sreejesh Keloth, a film maker whose movies focus on social issues.

Currently, like in other parts of India, youth unemployment and farm crisis are major issues in South India too. The Congress is confident it will make huge electoral gains by providing a solution to these issues and it hopes to form the government with support from regional allies.

It will be interesting to watch if Rahul, with the old team of Palaniappan Chidambaram and Dr. Manmohan Singh, can recreate the magic through reforms that the country and world witnessed under first Indian Prime Minister from south Pamulaparti Venkata Narasimha Rao: to pull India out of an agriculture and economic crisis that NDA refuses to believe exists.

(M. Rajendran was in Wayanad recently.)